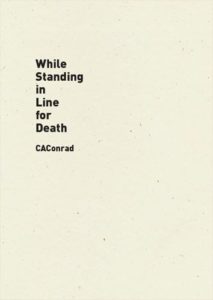 CA Conrad
While Standing in Line for Death
Wave Books, 2017

I was introduced to the work of poet CA Conrad at Alley Cat Books in San Francisco. I’d heard of them but hadn’t yet heard or read their poetry. The reading was, to say the least, captivating. Not only was I enchanted by their physical presence and familiarity with crystals and tarot, but their work intrigued, energized, thrilled me. Profoundly, their poems stand with life and against the brutality, violence and bigotry that permeate our culture. It is a poetry at once of resistance and wonder.

Conrad has developed and practices what they call (Soma)tic poetry, pairing ritual and poem-making. In their 2017 volume While Standing in Line for Death (Wave Books) they continue this practice. The book includes descriptions of the rituals along with the resulting poems, as do their previous full-length collections ECODEVIANCE: (Soma)tics for a Future Wilderness and Another Beautiful Marsupial Afternoon, both published by Wave.

While Standing in Line for Death opens with a sequence of poems, “Sharking of the Birdcage.” Its generative ritual was performed using crystals and undertaken to overcome the poet’s depression following their boyfriend’s brutal murder and its cover-up by the police department in rural Tennessee. “The rituals for creating poems have the power to change us in ways we have yet to fully explore, and I was determined to find the right ingredients for the ritual, and I did. It worked,” Conrad explains. This was the poet’s third ritual-based attempt to heal from the trauma of this terrible loss and the unresolved crime. “We are time machines of water and flesh patterned for destruction, if we do not release the trauma,” they write.

As repositories and transmitters of energies, crystals figure prominently in many of Conrad’s rituals. The poems in “Sharking the Birdcage” can be understood as crystallizations of emotional energies finding their expression through these crisp concise poems. On the page the single-stanza poems, addressed to Conrad’s dead lover, Earth, suggest crystals. As super-charged, faceted structures, they command directness, naming the cultural legacy of hatred, couched in religiosity, that brought about Earth’s murder: “Jesus Loving/Faggot Killers always win/how strong was my failure to keep you alive.” But as these lines suggest, along with this naming comes a movingly rich emotional field. The poems move fearlessly between anger, survivor’s guilt, tenderness, sorrow, anguish, love. Incorporating dream, memory, image, assertion, they are, in a sense, a map of grieving—a multi-dimensional map, not drawn but forged.

Heartbreaking lines of tenderness, “I lost a pen a book some money/feeling unexpectedly closer to you,” give way to sorrowful questioning: “did they love/anything at all when/covering you in gasoline.” A revenge dream resolves into an expression of enduring love: “the other is begging as I choke him/his neck as soft as your neck/I pull him off his knees/check for tattoos/is it him/is it you/I miss you/I love you.” Through dream logic—and aided by crystal transmissions—the unknown perpetrator becomes the known lover. The speaker’s ongoing love for Earth displaces their desire for revenge.

The poems in this sequence rage. They indict: “fuck the real/America up/the ass with/the fake one.” They exact dream-revenge. But what lingers in my mouth after I read them aloud, what resonates in my fingers as I turn the pages, is the tenderness, the yearning for a world governed by love: “the hummingbird drinks your/wounds away.” As the beloved, as spirit-guide and co-conspirator, Earth is present here. He’s been conjured and participates in the creation of poems which act as a healing force not only for the poet but for our world: “let it be done you said/let it be done I said.”

In ritual and poem alike, as well as in the new world order this poet imagines into being, small things like hummingbirds, ants and bees have great power. Broadly speaking, poetry, too, is a small thing with an enormously restorative potential. In “Bee Alliance,” attentiveness to bees, tasting and touching their bodies as they work the flowers, provides occasion for the poet to reflect on the knowledge this ritual has allowed access to: “Dear Fred, sometimes the bees out here taste like an insecticide a poet wrote the advertising jingle for. Love is not hope because hope is about the future. Love is about the present and being firmly inside that space, waking us to the bodies we are living in, not the bodies we had, not the bodies we wish we had.” The ritual includes the poet masturbating near a bee hive—for what brings us into the present and into our bodies as completely as sexual touching and orgasm?

Conrad is fearless in their pursuit of the conditions that ground them firmly in the material world, a space in which not only humans, not even especially humans, live out their lives. The poem, “Bug I Love You,” insists: “shake it off shake memory of/the saddle off…shake blood into the ear/shake it shake it off…suck in ribs to/let Death pass…shake shake/to the/glorious/sound of/saddleless/galloping…” Its form suggests shaking off constraints, loosening, letting the straps and bridle fall away. As the horse shakes itself free, we are made aware of the constraints that bind us, maybe old bigotries, maybe false allegiances. Maybe the belief that humans are superior to non-human beings. The poem is both enactment and goad. In this it does the work of true prophesy.

Conrad’s work manages to alchemize anger and heartbreak into righteous indignation and truth-telling: “twelve trees is a forest these days/clinging to dirt between/shopping malls and banks/everything gets caught clinging between/shopping malls and banks.” Repetition serves to emphasize the extent of the damage being done to ecosystems and their inhabitants in the name of corporate profit. The verb “clinging” suggests the tenuousness with which everything—everything—exists in the shadow of capitalism. Underneath the indictment lies lament. Clinging is such a desperate way to be.

“tears taste/exactly the/same all/over the/world god damn” the speaker asserts in “Check Your Dark Traffic,” a poem concerned with memory and trauma to both humans and the animals we eat. This poet-prophet is comfortable with exhortation: “in the midst of war/even our shyness/must cease/held inside a shudder/pressed into the dream.” Conrad never loses sight of the fact this country is at war—with other countries, with its own people, non-human beings and the natural world. This awareness informs most of the poems in this book—perhaps even most of Conrad’s substantial body of work. To what does this prophet call their listener-readers? I suggest it’s to the attentiveness, sensuality, justice for all beings and holistic awareness that prefigure agape.

Structured tightly, the book’s single stanza poems put me in mind not only of crystals but also of magic spells or incantations. Every word is charged to perform at its peak energetic level. Rituals call the poems into being and set the intention, and the poems themselves catalyze the energy. With their propulsive, often paratactic energies, Conrad’s work in this and other books seeks to remake or reset human awareness. “at what point do we submit/to the authority of flowers” asks the speaker in “Leave Something Quiet in Shell of My Ear,” a poem whose ritual-genesis involved eating cherry blossoms recently visited by bees and other pollinators. But first Conrad smelled each blossom and gazed into “its newly unfolded star interior.” A connection is made between stars and flowers and the human organism, sensing, eating, made of the mineral and vegetable matter of flowers and stars:

Our bodies partake of the processes of the earth—we are part of those processes. But only a part. We must not, these poems insist over and over, forget this.

One of the great projects of Conrad’s (Soma)tic poetry is to bring the body’s knowledge to bear in the making of poems. Rituals act to focus the poet’s awareness on the body. Conrad swallows and eliminates a crystal each day. They observe bees at work, touch the fuzz of those tiny bodies, listening to the buzz and hum. They eat flowers. They masturbate. Page by page they chop up the Book of Romans, “add a little crystal-infused water, and pulverize it to a wad of pulp…then fill a gel suppository with the page, add lubricant, and insert it past my sphincter and deep into my asshole.” All this while “taking notes for the poem.”

In this way, another great project of the book is realized: disavowing the shame a right-wing Christian America seeks to perpetuate among persons it deems sinful and unworthy: “my poetry is/from the devil my/cousin informed me/and I informed him Odin/is the only god I would let/fuck me without a condom/not even Jesus do you hear me.” Against a condemning family and culture, the poems assert a glorious inconclusiveness, while never losing sight of planetary peril: “I eat a copy of While/Standing In Line/For Death chewing while drawing circles on sycamores/on foreheads on squad cars on factory walls on/soda machines shiny new portals on planet/Earth we vibrate on hill with/the soldiers in black bags/the never-smoked/cigarette in the/dangling of/our hour.”