This month we feature new work from the five finalists of Omnidawn’s 2017/18 Open Contest:


PATROCLUS IN THE ARMOR OF ACHILLES


The earth what’s wrong with the earth.

The sky what’s wrong with the sky.

The sea, the sun, the moon, the constellations.

The wonder of cities like this city like the light glancing off of us each as we
advance or retreat like the terrible light what’s wrong with the light the
people the city with beauty.

I feel like Patroclus in the armor of Achilles.

To feel fierce at night with you walking ahead, red thread in a maze.

To feel like Patroclus in the armor of Achilles.

Is it all enormity and life will it protect me and keep me here.

In the streetlight where you walk ahead towards the train I will miss and the
cab we will catch that takes us to the room I have let where it’s so different
now is it so different now.

I feel like Patroclus in the armor of Achilles.

The odious what’s wrong with it. 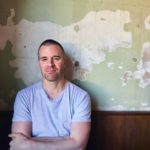 Chad Bennett lives in Austin, Texas and is an assistant professor of English at the University of Texas. His poetry has appeared in journals including Colorado Review, Denver Quarterly, Fence, Gulf Coast, jubilat, The Offing, and The Volta, and has been reprinted by Poetry Daily and Verse Daily. A chapbook of his poems was awarded the 2018 Snowbound Chapbook Award and is forthcoming from Tupelo Press; his first book of poems, Your New Feeling Is the Artifact of a Bygone Era, won the 2018 Kathryn A. Morton Prize and is forthcoming from Sarabande Books. He is the author of Word of Mouth: Gossip and American Poetry (Johns Hopkins University Press, 2018), a study of twentieth-century poetry and the queer art of gossip.


the soul of fact, the minds duration and
all the physical readings in the taste of blood,
monotonous and longer, love too long a pain
which long ago was made, new factors making
intimate loss, giving poetic diction within its depths

the plot of satire in French pyrrhonism,
this pessimism in the enlightenment dream,
my fatherly concern bearing witness, my many
geometric expansions into the world fore shaken,
life is no object or shape, its a beast burning
struck by the obstinacy of mind

like a thought by Pascal taking pleasure in ones void
deprived of sight, planned and predetermined,
supposed from these internal resemblances in the nerve
of popular reason, in individual cosmogonies these
minuscule failures saturate perfectly open, no further
need to speak, or attach too much importance to words

if the world be worth thy winning through
the point of necessary cohesion, the suppression
of thought, this malaise without name
the high substance of the mind both
false and faithless, now these noble feelings
seem vain and hollow in this crowded place,
this menacing, this overwhelming place 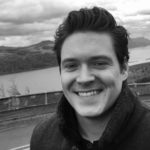 Sam Gilpin is a poet originally from Portland, OR, living in Las Vegas, NV, as a Black Mountain Institute Ph.D. Fellow in Poetry at the University of Nevada, Las Vegas. A Prism Review Poetry Contest winner, he is currently serving as the Poetry Editor of Witness Magazine. His work has appeared in various journals and magazines, most recently in Sonora Review, Mistake House, and Colorado Review.

is that u
come withering? u
pruning my clip-
on wings
walking back my drag
into man

U said, I woomed u out of the blue
into bright blu
bby u share
yr headphones w/ me the sex of sharing
is the sex of listening soft in
our morning’s orbit

U said, I like u forget what walking feels like on good days &
on bad it feels good when u do what u do

i.e. I’m walking between the chambers of the heart now & I’m pretend-like
groves of honey
i.e. I’m walking home at night with other stranger cavities and find it strangely
compelling

O I do 2! like
wildflowers. But when I play dead
I say things, I said, I’ve lost petals
rolling from one rose
to the next 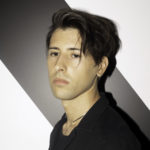 Alyx Raz earned their BA at Vassar College, and are an MFA candidate at UMass Amherst in poetry. They have worked for the Museum of Modern Art, the Whitney Museum of American Art, Andy Warhol Film Project, Slope Editions, the Massachusetts Review, and Jubilat, and they are a founding editor and editor-at-large of the Vassar Review. They were a recipient of an Academy of American Poets Prize and the Deanne Beach Stoneham Prize, and a finalist for Omnidawn’s 2017 Chapbook contest.

I want you to know I look like her


the shape of revelation feeling his penis


with water for fever problems buried


with water for fever when they gave 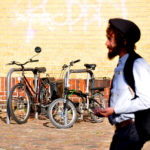 Robert Yerachmiel Sniderman is a poet and artist. Through 2018, he worked as a DAAD Research Fellow at the Institute for Art in Context in Berlin, where he contemplated, amassed an archive, and performed public art actions with/in the largest intact and active Jewish cemetery in Europe. His most recent texts and project documentation appear in Hold: A Journal, PROTOCOLS, and In Geveb: A Journal of Yiddish Studies. Based in Bellingham, Washington, he is working on a new performance with Polish artist, Joanna Rajkowska.


the songs the sentimentalist cries to

the doll head at the bottom of the bin her song

& the birds who carry sky their song

the song of Donald a child alone in his room

Kafka in his bath the lights out that song

the songs with shaky rhythms

the songs which kick away the sick man saying rage

the advocates of UFO’s their uncanny & lovely refrain

songs like circuits on the face of the sleeping warrior

remember songs when they used to be pleasant asks Midge

Orpheus charmed by song chewing on his nails

the physicist’s mustache the song which proves his theory

the politician eyeing the door the song behind it

the songs never written down never meant to be

← Sara Burant reviews CAConrad’s While Standing in Line for Death
→