Just as I was taught to kneel, the sun became foreign to me. How to speak after a different daylight emerges? Name that black chamber, its seamless, quiescent surface. Speak after an epoch, an apocalypse—find again that strange word for dew.

Uncover a grain of light amid the reft between us. That word you pondered and turned about, ultimately left at contact’s door.

Quietness, a virtue. Harmonic darkness without intent, the vast cosmos of what is neither felt nor seen. No light against those furloughs.

Whose name bends without my attention.

My favorite book is Stanislaw Lem’s Solaris. I read it and literally wept. It follows a group of scientific researchers seeking to understand a strange planet that has been discovered. All sorts of spooky things happen to them during their excursion. What it boils down to is that the planet itself is another life form—a truly different one that we have no means for being able to interact intelligently with. There’s this chasm of impossibility in the encounter that is utterly laced through with devastation. I am fascinated and haunted by this—the chasm of impossibility, the chasm of longing to know, the chasm of falling back into one’s self, devastated. I have been writing for some time now under the banner of a Speculative Poetics—a poetics that seeks to imagine an (aberrant) future’s psychological structures. A lot of this writing makes use of the rhetorics of knowledge (neutral/objective voice, some technical terms, etc) and sets it against an atmosphere of emotional/personal/spiritual devastation. I’m crazy about this mode. It’s the theme song for my being right now. “The Quiet Sun” is a more recent overture. The scientific lingo is scaled back, the devastation brought a bit more forward. I’ve been bereft. Here’s its song. 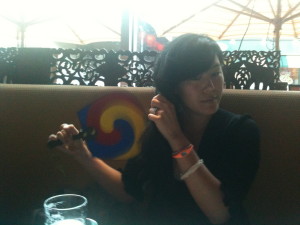 Sueyeun Juliette Lee grew up three miles from the CIA. She edits Corollary Press, a chapbook series devoted to multi-ethnic innovative writing, writes reviews for The Constant Critic, and is a contributing editor at EOAGH. Her books include That Gorgeous Feeling (Coconut Press), Underground National (Factory School), and the chapbooks Mental Commitment Robots (Portable Press at Yo-Yo Labs), A Primary Mother (Least Weasel Series at Propolis Press) and No Comet, That Serpent in the Sky Means Noise (Black Warrior Review). You can find her at silentbroadcast.com.