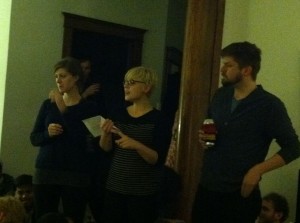 Located a block or so away from the Western El-train stop at historic Lincoln Square, you’ll find one of the most exciting house series in Chicago. Happening around the second Saturday of each month, the Dollhouse Reading Series is curated by founder Dolly Lemke, along with Ryan Spooner and Holly Amos. It takes place in a sprawling apartment building on the first floor.

The first thing you’ll notice when you walk in this spacious apartment is the atmosphere. The air is charged and spirits are high. Most of the people seem to be in their late 20s or early 30s and the conversation is non-stop. It feels friendly, open, and warm.

Lemke says she got the idea for the Dollhouse Series from attending salon-style readings in her home town of Milwaukee. “Being that intimate and close to the poet was new to me at the time,” she says. “I’d been going to readings at libraries, bookstores, galleries, and auditoriums, which was such a different sort of sterile feel. At a salon reading, there is less of a divide between the stage and audience, so you are invited into the act of reading more.”

Besides a couple of couches, there are no neatly arranged rows of chairs. When Dolly lets out a loud whistle, people jostle into the two front rooms, settle onto the floor cross-legged with their drinks, and hush up for the first reader. Since there’s no podium to hide behind, the readers are literally an arm’s length away from the audience, which makes for an extremely intimate atmosphere. It feels like a comedy club, where the audience’s reaction is instantaneous.

On this particular evening, the readers were myself, Roger Reeves, Sandra Simonds, and Kyle McCord.

I read first from the chapbook Fall for You published by Blue Press Books and some other recent poems, but you’ll have to visit the Dollhouse Tumblr to find out what my reading was like. 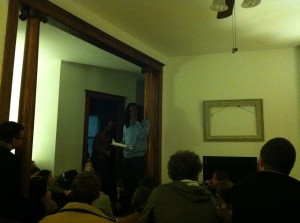 Roger Reeves is an assistant professor at University of Illinois – Chicago. He read poems from a recent manuscript and this work focused on issues of race and politics. Elegiac in tone, the poems were carefully crafted and linear in their unfolding. Though pieces like “Before Diagnosis,” “Cross Country,” and “Maggot Theory” were quite somber, Reeves’ charismatic presence and humor between poems was the perfect counterpoint for his reading. This autumn his first book, King Me, will be published by Copper Canyon Press.

After a 20-minute intermission, Sandra Simonds, an assistant professor from Thomas University who trekked up from Florida for this reading, kicked off the second half. She started with a long poem called “Glass Box” that was a cut-up meditation on life as a twenty-first century woman, navigating roles of mother, teacher, wife, artist, and lover. She continued with a series of sonnets that played with sonic elements, while stretching the capacity of language to carry meaning to its limit. To finish she read the piece “Yoga” from her book Mother was a Tragic Girl published by Cleveland State University Poetry Center. Simonds’ work was a pleasure to listen to because of its conversational tone, while being wry, sharp, and matter-of-fact in the same stroke. Her next book titled The Glass Cube is due out from Saturnalia Books in 2015. 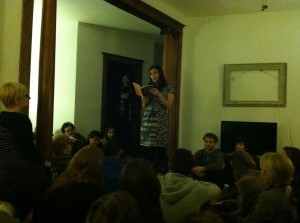 The final reader was Kyle McCord and he read exclusively from his book Sympathy from the Devil published by Gold Wake Press this year. The linear development and evasive construction of his poems combined with an encyclopedia range of content and witty sidesteps added a deeper tension to his work. “I Write You This on a Train Named for an Endangered Bird,” “Poem without Manners,” “Portrait of Satan in Southern Arkansas,” and other pieces played with varying frequencies of spoken language colliding with unexpected torsions of phrasing, and were enjoyable to hear as they unfolded in surprising ways. McCord is the co-editor of iO: A Journal of New American Poetry, as well as being the lead content editor for Lit Bridge, both of which can be found online. He also teaches at University of North Texas. 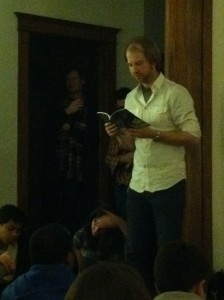 In March of 2013, the Dollhouse marked its two year anniversary and they’ve definitely caught the eye of Chicago. The Chicago Tribune, The Chicago Reader, and other local news outlets have featured profiles on this poetry series. On this particular evening, Karis Hustad from Vocalo 89.5 FM, a Chicago Public Media station, visited to interview Lemke, Spooner, and Amos.

“I’m not one to toot my own horn very often, but I have to say it feels awesome and terrifying to have the series be on the minds of the general public,” says Lemke. She gives substantial credit to former co-curator, Stephan Danos, who relocated to Seattle last September. “He brought a new cache of poets, connections, and a whole new look at social media. He really transformed the series, thrusting us into a realm of legitimacy. It’s definitely changed over time, but we’ve always tried to maintain that local, neighborhood feel.” 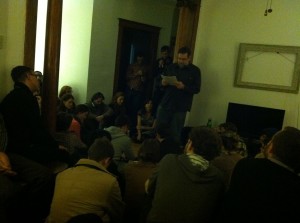 What else do you need to know about the Dollhouse Reading Series? Well, their motto is “It’s a poetry party.” The Dollhouse is much more loose than your average series. This isn’t an event that starts exactly on time with a rigidly dictated end time. It’s a social poetry gathering that’s quite the opposite of what you’d find at a typical university, which is why it seems to draw between 50-60 people each month. The Dollhouse is a place where you can keep to yourself or meet a bunch a people, but you will definitely squeeze in with a lot of other poetry revelers, so be prepared to get friendly and enjoy the conversation and poetry.

“I think the series serves the Chicago community by being accessible, comfortable, and exciting; we also aim to promote and showcase poets of wide aesthetics,” says Lemke. “It’s so important to have a wide range of poet voices: gender-wise, racially, ethnically, aesthetically, and geographically. We don’t want to become old hat any time soon, so we are always looking for young, fresh voices. Ultimately, we want to keep you guessing and coming back.”

The best way to find out more about The Dollhouse Reading Series is to check out their Tumblr site at thedollhousereads.tumblr.com or by joining their Facebook group. If you view their Home Movies page on their Tumblr, you’ll get a feel for the wide range of readers they invite to this vibrant poetry series.

A helicopter hovers in the distance this morning
and after I awoke from a dream of walking a long
slow curve on the highway, I stubbed my toe
on the door stumbling to the bathroom. Sometimes,
the morning welcomes you. Sometimes, she is waiting,
has been for years, impatiently, waiting to learn your face.
Sometimes, there is no choice, no reason, only need
and once obeyed leads to—well, you know where.
I reheated the biscuits and gravy she made the other
morning and was happy as she sliced the fruit and
steeped the tea. I decided this morning, despite the
pain, to enjoy what I’m doing, what I’m reading,
besides waiting for you know what. The humidifier
bubbles and spouts forth its cool mist. For once,
I settle back into my life and see it regarding me
pleasantly, coolly as I regard it with a relaxed
and boggled air, like hearing a peacock cry
for the first time on a moonless night, like the first
accidental orgasm, like feeling better after a week
of illness. It just won’t stop despite the need
to somehow make it stay—the Jack Russell Terrier
at your feet staring impatiently, waiting to be
scratched. Somehow it all crowds in, demands
to be known, commas scattering like sesame seeds
over the seaweed salad you question. The helicopter
swings overhead roaring and is gone.

The Mike Tyson in me sings like a narwhal
minus the nasally twang of sleeping in a cold ocean,
the unsightly barnacles latched to the mattress
of skin just below my eye, the white horn
jutting out from the top of my head—
oh god bless us mutts—the basset-blood-
hound mulattoes, the pug-mixed puppies
left behind the dog pound’s cinder-block walls
as German Shepherds, Labradoodles,
and Portuguese Water-Dogs turn their inbred behinds
and narrow backs at our small-mouthed blues.
It’s hard to smile with an ear in your mouth,
two names, and a daughter hanging by a thread
from the railing of a treadmill. Oh neck
and North Carolina and a white coat of paint
for all the faces of my negro friends
hanging from trees in Salisbury.
Greensboro. And Guilford County.
The hummingbirds inside my chest,
with their needle-nosed pliers for tongues
and hammer-heavy wings, have left a mess
of ticks in my lungs and a punctured lullaby
in my throat. Little boy blue come blow
your horn. The cow’s in the meadow.
And Dorothy’s alone in the corn with Jack,
his black fingers, the brass of his lips,
the half-moons of his fingernails clicking
along her legs until she howls—
Charlie Parker. Charlie Parker. Charlie Parker.
Oz is a man with a mute body
on an HBO original show that I am too afraid to watch
for fear of finding my uncle,
or a man that looks like my uncle,
which means finding a man that looks like me
in another man’s embrace or slumped over a shiv
made from a mattress coil and a bar of Ivory soap.
Most young kings return home without their heads.
It’s 1941, and Jack Johnson still loves white women,
and my mother won’t forgive him.
If she can’t use your comb, don’t bring her home,
my mother says in 1998. It’s 2009,
and I still love white women.
Charlie Parker. Charlie Parker. Charlie Parker.
Often, I click the heels of my Nikes together
when talking to the police, I am a cricket
crushed beneath a car’s balding black tires.
Most young kings return home without their heads.

As it turns out there’s no autobiography of the man who invented Sorry!
entitled I Am Not Sorry for What I Have Done, nor a manual on calamity.

But I’m prepared to console you while you weep here beside the Kremlin replica.
Your hair is pastry-shaped, and the replica pigeons are eating Danishes

and are little more than the white noise of the rifle plant. There were how many words
before this, but none about estrangement.

I was away in Colombia last winter while in Grapevine your husband
did the unspeakable with another woman. Returned home

to your neatly packed luggage. The board game and puzzle
paused indefinitely. Outside, pigeons perished of rice. Light passed

through the panes to the hurt of what was never real. I would forgo these images
for anything, M. Our lives surrounded by a tiny red square

and Saint Basil’s Cathedral in miniature which we sweep of dust daily. You pore
over the realism of each model. A hawk of light fills the chapel and will not last.