from All the Rage

THE HORROR OF APARTMENTS

Watchwords of another life, fade one into the other.
In my own dream. In captivity.

If desire to escape, could escape
but it builds around it
in sequences of robes, bougainvillea
chambers rearranged
to suit

The way a comfort comes close. And wounds itself with worrying.

Shades of gray, bleed black
against the masks
interior face, immured
as skin does

in decline, the matter of waiting
wears out the resting place

the boundaries and edges see to see    where none exist, the face
based on experience

rests here with me within

In my own dream. Another.

Double takes the enclosure, buries me
in its other self.

the angles are everything

Not one another, nor self to stand
sentry against. It catches it in close quarters
ground down amongst the mirrors
salt to salt

In the soft space, the dream space. It turns and turns
at arm’s length

“The Horror of Apartments” is part of a series-in-progress titled All the Rage. These poems are written in correspondence with various ‘hagsploitation’ films of the 1960s and 1970s. The films star A-list actresses who, as women over 50 in Hollywood, were retired to lead roles as unhinged, hysterical, homicidal maniacs. 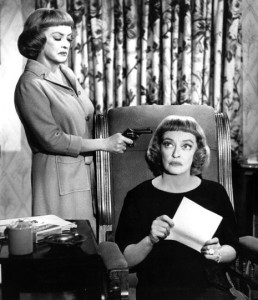 E. Tracy Grinnell is the author of Some Clear Souvenir and Music or forgetting, both published by O Books. Helen, A Fugue by Grinnell and A Pear / Actions Are Erased / Appear by Leslie Scalapino were published in volume #1 of the Belladonna Elders Series. A conversation with Scalapino included at the end of this book is viewable online: lesliescalapinotribute.wikispaces.com/file/view/E+Tracy+Grinnell2.pdf. Recent writing is collected in the manuscripts Hell Figures and portrait of a lesser subject.