Jane Austen had a kleptomaniacal
aunt. This is just another thing

we have in common, like we
both have a little too much

time on our hands, and find women
walking pugs humorous, and look

hot in motorcycle boots, despite
an overwhelming fear of motorcycles.

I tried to write hundreds of pages
about likeable unlikeable girls.

Jane Austen knew how to describe them,
but I just know how to be one.

Who was Elena Adelaide?
A mystery in the timeline.
Percy Shelley’s bastard child?
A replacement daughter adopted
to placate Mary Shelley’s monstrous grief?

Elena Adelaide sounds like a baby
in an ergonomic carrier in Park Slope,
which is in Brooklyn. Remember

the couple dancing in front of us
at the show on Thursday night?
With her sharp features and shock
of hair & her red dress, a modern

while Elena Adelaide slept at home, perhaps
watched over by Jamaica Kincaid
in Williamsburg
or Greenpoint
or nowhere

But all the fractured moments
that kaleidoscope into a memory
of an ideology, can that…

& it’s there when you visit your childhood
bedroom, stuck in book spines
to the margins you wrote your first poems in
to the prom dress you never dry cleaned

These poems are drawn from a book-length manuscript of irreverent, inaccurate, or otherwise “bad” responses to British Romantic literature. Taking as my starting point Wordsworth’s 1800 claim that the lyrical ballads were an experiment in “the real language of men,” I composed these poems from uncensored thoughts and afterimages. If, as some have argued, we might think of poetry as “overheard”—borrowing and simplifying a formulation from John Stuart Mill—then I wanted these poems to overtalk, to capture gut reactions to literary history and popular culture that, once blurted out, can’t be taken back. 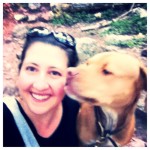 Rachel Feder is an assistant professor of British Romantic literature at the University of Denver. Her articles have appeared or are forthcoming in journals including ELH: English Literary History, Studies in Romanticism, and Romantic Circles Pedagogy Commons, and her first poetry chapbook, Words with Friends, came out in 2014 from dancing girl press.