This month we feature new work from the five finalists from Omnidawn’s 2014 1st/2nd Poetry Book contest:

I
How many times can we see it
before it fails to be interesting?—
a figure’s static circumscribing
another in concentric window
panes, dusk’s photochromic mist
caught between tints, or a mirror
refecting the tireless energy
of the present as it hedges
all possible angles of approach
to morning’s operatic runway.
Faith is a fruit of regeneration, yes,
and yet if we have the time
to consider our own spectra
at some leisure while elsewhere
the suffering to which we never
much had to grow accustomed
continues, we will tell ourselves
that a latch exists wherein
we swing others at the same time
that we ourselves are swung—
the sun still set to arrive at
the exact moment our redeye
leaves the ground. 20-20 vision
exists mainly in an integer’s
opulent clairvoyance, as in the
type of vacuum that cannot
exist in any form in which
it would be possible to know it,
a doubtless philosophy about
the mannerisms of doubt,
the strictures set to support
other integuments of the earth
solving for the sun each morning,
brightening a day’s innuendo—
those things that have arrived
that we’ve already discussed:
an itch made worse by its estimate,
the ways in which smudges
in streets’ rain and snow act
as a rudder we use to adjust
the city’s sentient alignment away
from our already Orphic eyelids.
But the snow landing on prostrating
edges of the wharf is something
we’ve failed to decipher as
anything but another happening
in a long line of randomness
we’d like to think of only as
the beginning of a new start. 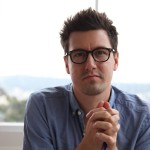 Andrew Nance’s poems have appeared or are forthcoming in Colorado Review, Guernica, Gulf Coast, The Literary Review, The Volta, and elsewhere. He is the editor of Company. He lives in Athens, Georgia, where he is currently a PhD candidate at the University of Georgia. Find him online at: andrewnance.org.

Her bristle only dogs can ear

No thing less envelopes her

Is leftovers scrape the land
is take-away is sleight-of-
god-hand is her recreation
seamless, stitches pried apart? 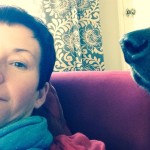 Caroline Young lives and writes in Athens, Georgia. She is currently working on a digitally interactive version of Tender Buttons as a Marion L. Brittain Postdoctoral Fellow at Georgia Institute of Technology.

I’ve crossed out my times
I wish you were available.
I follow the goat down the path
& the flower says “Picasso is fishing
for ideas in a sad child’s head.”
The sad child’s head is a stew pot.
The children make paper.
Every time I buy them food
the flower, sad child, & Picasso
has been fishing & is cruel.
The world is a smaller place
I’ve remembered this & the paper
the goat has now eaten. 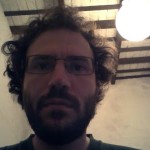 Daniel Coudriet lives with his wife and son in Richmond, Virginia, and in Carcarañá, Argentina. He is the author of Say Sand (Carnegie Mellon University Press, 2010) and Parade (Blue Hour Press, 2012). His poems and translations of Argentinean poetry have appeared in many journals, and his translation of Lila Zemborain’s Rasgado was awarded an NEA Fellowship.

from In The Gun Cabinet

& here from my window in the gun cabinet
the trees’ movements
denoted in shades of blurred green shifting hues in the squares of the window screen—
& I too heavy to sit forward, unlock, lift the glass—each leaf in a barrel roll
3 or 4 on one axis (each twig & branch—
30, 40 all shimmering, synthesizing, & in flight)—& the major branches swinging back & forth laterally
as if on ecstasy (on the wind, brushing) & me in the chair
like a discharged gun—empty space, window pane, small space, then screen—
the gun cabinet hissing in the background you heavy sop you
late you overdue can of beans—
as the leaves fan, frantic, spectral past the screen; back arched, a girl seething own
me through the tele—[Gr.]: “far off” (as I am, as she is looking back) all inter-space, breath, removal, apotheosis
of my culture—dear bomb, dear discovery of the gaze as determinant of place—dear definitive state—

& here at my window, from the top of my window, the trees wave like rescue signals merging in the gun cabinet, branches hurling
upward wrist-deep in the glare

a single leaf lifts itself, a finger (my finger) curling upward, into the space above
& today a white balloon lifts itself all-tremolo to the thinned-out blue above the gun cabinet 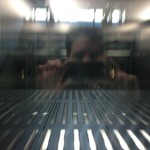 Mike Lala (b. 1987, Lubbock, TX) lives and works in New York. Author of two chapbooks, his poems appear in Boston Review, Fence, The Brooklyn Rail, Denver Quarterly, Jubilat, The Awl, and VOLT, among others. Read more at www.mikelala.com.

You will get a note
that someone
important
died.

You will not
be able to place
the name
or relationship.

You will wake
up in a dream
where all your friends
are grieving.

They will all talk
in fake southern accents
and wear
phony black moustaches.

Even the women
like vaudevillian villains
and they will pretend
not to know you.

And you will say,
but it’s me, it’s me.
They will plan
a train robbery.

And tie you
to the tracks.
They will give you
an in memoriam pamphlet.

Folded in three
over a table
in someone’s dim
kitchen light.

Nik De Dominic is a poet and essayist. Recent work has appeared in THERMOS, Sixth Finch, Guernica, DIAGRAM, Michigan Quarterly Review, and elsewhere. He is a founding editor of The Offending Adam and a poetry editor of the New Orleans Review. He lives in Los Angeles and lectures in The Writing Program at the University of Southern California.