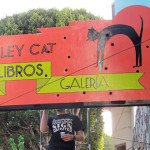 The Macaroni Necklace Release Party was hosted at Alley Cat Books on 24th street in San Francisco’s mission district. It is a perfect venue for a reading containing a spacious back area for events, with walls covered with artwork from local artists. Alley cat also has impressive acoustics, which made it easy to clearly hear each performer in even the most tempered projection of their voice.

Macaroni Necklace is a new zine of art and literature, releasing two issues a year, created and edited by bay area writer Eric Sneathan. The most recent Macaroni Necklace release was a multimedia lit/art collaborative project, consisting of works created by two different people for each section, so each reading consisted of a collaborative performance featuring the two artists/writers. There were three different readings/performances that varied in form, mode, tone and content.

The first performance involved a pre-recorded tape that played as two writers Mg Roberts and MK Chavez interrupted the recording by reading prepared work at different intervals, back and forth between each other, one from full length pages, the other reading from strips of paper that she would then let fall to the floor. There were multiple sections to the recording, starting with a misogynistic rap song, then a loud, abrasive, unpleasant high pitched static moving to what sounded like a distorted baby exploring its own voice, small children, adult whispering, all these sections were repeated, creating a cyclical narrative. During each section and the silences between them, Roberts and Chavez would read their lyric interruptions, disrupting the narrative with their voices. It was a dark piece, with an angry tone and a challenging attitude that felt haunting.

The next two collaborators were Sarah Capp and Stephanie Young, although Sarah Capp was the sole performer because Stephanie Young wasn’t present. Their project was an extended version of a game called “pooper cat,” a word association game. Capp launched into a rather long winded explanation of how the game works and explained that she and Young’s collaborative piece was a collage of their conversation and creative output from playing “pooper cat” during a lengthy Skype session. Capp established a lighthearted, fun atmosphere, sprinkled with some amusing moments of absurdity and randomness that she highlighted from their creative catch up. It was obvious that she enjoyed writing this piece and was fond of the general experience, which was passed on to the audience.

The final performance was presented as a video projected onto a large screen. Tom Comitta and George Phau were the two collaborators, Tom the actor and performer and George the filmmaker of the video. There was a brief explanation relating to their creative process and what they were trying to achieve with their fourteen minute long film, a set of variations relating to zombies and art of the grotesque. Tom Comitta is a “sound poet” and the video used him as its focus, following him around an apartment, capturing him from multiple angles. Sometimes capturing him clearly, sometimes with an unfocused lens, distorting his image as he mixed together words and sounds, sounds and the vocal capabilities of the mouth serving as meaning and content. Although this was intermixed with a funny, strange, oddly practical, zombie informational guide on how to treat and deal with these new zombie friends. These brief strings of coherence were short lived however as he kept falling back into sonic variety from his mouth experimentations. It was an entertaining, and well-crafted film, simple, but effective.