In 1965, Robert Smithson created his Enantiomorphic Chambers, two steel and mirror constructions hung on a wall next to each other. The viewer would step inside the “chambers,” between the two mirrors, expecting to see her reflection but would be met instead with “spatial illusions, appearing like frames seen simultaneously from different vantage points.” The reflective surfaces were mathematically positioned to cancel out one’s image. Instead of the image of oneself, the viewer was confronted with the absence of her image. Here eye and “I” became a revolving aporia thats center was everywhere, its circumference nowhere. The viewer, in other words, was left without her anticipated framing. Instead of seeing herself, she saw her seeing, “crystalline and collapsible.”

In Emily Dickinson’s poetry, she creates linguistic enantiomorphs in which “I” and eye are continually displaced by visual processes. Pressing temporalities of sight into paradox and doubt, themes of choice and possession emerge from her experience as a woman in the 19th-century United States. When she writes, for example, in poem 336, “The Meadows – mine – / The Mountains – mine,” the speaker claims these things not as physical property but as visual temporalities that haunt her being. She claims, in other words, dispossession. What self can one possess if one is made to exist without possession? the poem asks. If one’s property is always another’s, a father’s or a husband’s, one receives one’s dispossession like an inheritance. Using language to loosen ideological structures embedded in the gaze, Dickinson charts recursive waves of identity-in-motion, creating a refusal of the terms of ownership.

Before I got my eye put out –
I liked as well to see
As other creatures, that have eyes –
And know no other way –

But were it told to me, Today,
That I might have the Sky
For mine, I tell you that my Heart
Would split, for size of me –

The Meadows – mine –
The Mountains – mine –
All Forests – Stintless stars –
As much of noon, as I could take –
Between my finite eyes –

The Motions of the Dipping Birds –
The Morning’s Amber Road –
For mine – to look at when I liked,
The news would strike me dead –

The speaker begins “Before,” but this is after the trauma has occurred. Her eyes are “put out.” The ambiguous “got” allows us to imagine that this trauma might be self-inflicted. The speaker, we are told, has enjoyed sight as others did and do–others who “know no other way.” “Know” here can mean that these creatures know no other way to experience the world. But it can also mean that these creatures create knowledge of world and self through vision. In the second stanza, the speaker faces her proposition: possession of the Sky in the now. But the temporalities are crossed. The speaker exists in both times. And because the reader imagines with the speaker what she can no longer see, the meadows and mountains, we join her in the poem’s before and after, an empty visualization of a world no longer available to the senses. Without world, there can be no self, and the speaker is a ghostliness beholding what isn’t there. Can we read the “soul” in the last stanza as a temporality, a being with the world outside time and place? Or maybe the speaker’s non-being allows her to operate across time, before and after the event of her blindness. Because she exists in no particular time, she is able to be in past, present, and future. Because she is without world, she is with knowing but without knowledge. The “soul” exists neither before or after the world but in the before-after of poetry, a call across cancelled images of self and identity, the only habitable distance between which is being becoming what (it) isn’t or can’t be.

Does the speaker inhabit the eternal now of poetry?
Time without time?
Does one possess what one sees or is one possessed by it?
Is the speaker “possessed,” property of?
Or is she “possessed” (as by an evil spirit) by concepts of “self,” “time,” “mine”?

In poem 336, knowledge is lost in its formation, knowing; we lose ourselves to what vision claims as its own: “I could not see to see,” she writes famously in another poem. This is Smithson’s “double perspective of past and future that follows a projection that vanishes into a nonexistent present.” We end by witnessing the speaker’s blindness activated across a disappearing now. Brought to being’s non-site, the present-absence of poetry meets the absent-presence of perceiving subject. Lost temporalities scatter a linguistic here nor there, and an exponentially empty center breaks down identity with the gaze constructing it. In Dickinson’s poem, thought, world, and memory are always outside the framings which might make them recognizable to a perceiving mind. In poem 745, which can be imagined as an extension of the above poem, the poet removes the experiencing subject. No “I” but “Eyes,” multiple and accreting in language:

Here is where presence and absence run together in enantiomorphic counterpoint. We are given “The letting go / A Presence.” We can read the ambiguity in the linebreak as enabling “the letting go of a presence” or telling us that “the letting go is a presence.” As in 336, we have a causality twisted out of resemblance. There’s nothing to hold to now but our beholding, sunrise, which keeps day hidden in plain sight, within reach of the mind’s eye but beyond the sensorium. In his essay on Enantiomorphic Chambers, Smithson writes of the “[D]uplex Structure of sight as an invention.” This “duplex structure” could refer to his two mirror structures or to our bicameral vision pressed into disarray by the work. Dickinson’s poem is similarly double; it is split, but it does not fall into binaristic thinking. We begin with the definition of renunciation in the first line. But a second definition is provided in the poem’s second half: “Renunciation-is the Choosing / Against Itself.” Just as we were lead in 336 through the theme of possession which carries with it dispossession, here we have a forced “Choosing.” It is a conditional choice, coming only: “When larger function—/Make that appear—/Smaller—/that Covered Vision—/Here—”. We can read this “larger function” as the mechanism by which “Here” is made to arrive. But here is also a “Covered Vision.” Is the “putting out of eyes” also sunrise? Is seeing blindness? Does Dickinson want us to encounter the blindness that creates the world via the gaze? Does she want us see the flimsiness of frames invented as we look? Instead of a second definition which extends the first, we are presented in 745 with a de-definition: of renunciation, of sight, of self, of absence, of presence and of experience. “Function” is the Latin past participle of fungi, which means “to perform, execute, discharge.” Dickinson releases the entropic gaze to a nonexistent present in which ideological structures are exposed as provisional boundaries breaking down and building up frames of knowledge to create the illusion of a stable “I.” Self is suspended in sight’s operation, and the present is unobtainable, tossed back continually on its processes.

In poem 822, we find the speaker faced and facing not just loss of self but non-being, this prospect emerging as a series of paradoxical propositions. When we see our seeing as we see it, the poem seems to say, a kind of light is cast, a dialectical image-with-eyes in which “knowledge shoots the moment in the heart,” as Walter Benjamin writes. Seeing becomes a series of liminal encounters between propositions, where “I” is a moving accumulation of aural and visual faultlines singing multiply into silence:

How adequate unto itself
Its properties shall be
Itself unto itself and none
Shall make discovery.

Adventure most unto itself
The Soul condemned to be –
Attended by a single Hound
Its own identity.

: Are consciousness and self separate entities, of one another but not one or the other?

: Each must be (or become) of the other as each becomes like and unlike it-self.

: “traversing the interval”: what is it it-self? Is self of itself or like itself?

: Is one one’s own like-ness, always removed from an experience of self?

: It-self must experience itself and is less in than of the world; this is maybe a kind of death.

: Consciousness always mistakes itself. Words are untrue in true sense.

: Maybe I am unable to locate the world. Or even the self that co-creates it.

: This would mean time is always past; it would mean the death of Death. But experience, Dickinson might be saying, is its purer form.

: One can’t experience the world or another but only one’s consciousness experiencing these things. One experiences, the I of it, it-selfness.

: One has nothing to discover but “I” it-self. There’s the fact of being, but this is always something other; poetry.

: Identity is the “Hound” at one’s feet that chases her into other(ness). I hunts “the soul” which is-and-is-not myself. 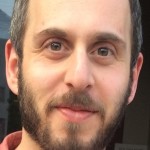 Adam Fagin’s poems have appeared in Boston Review, Fence, VOLT, and elsewhere. He has a chapbook out from Little Red Leaves called T’s Alphabet. Another chapbook, THE SKY IS A HOWLING WILDERNESS BUT IT CAN’T HOWL WITH HEAVEN, will be out soon from Called Back Books. He lives in Denver and is working on a documentary poetic project about Midrash, the anti-pastoral, narrative control, and Cotopaxi, a failed 19th century Jewish agricultural colony in Colorado.