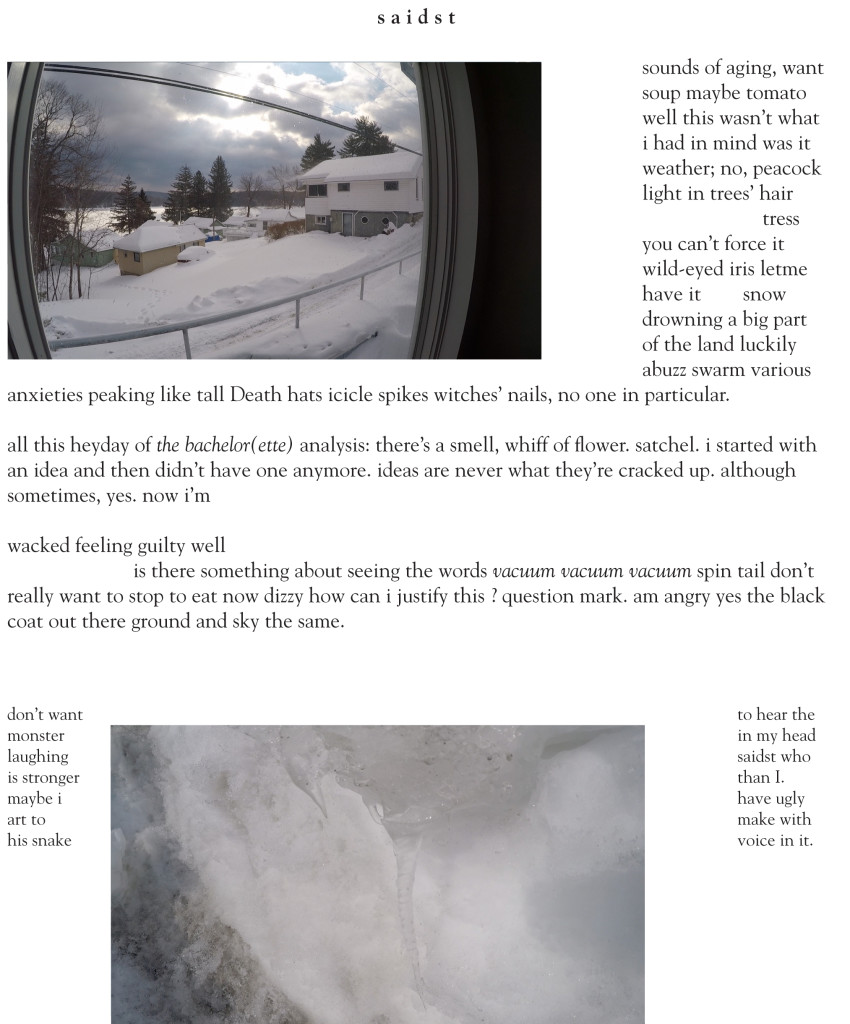 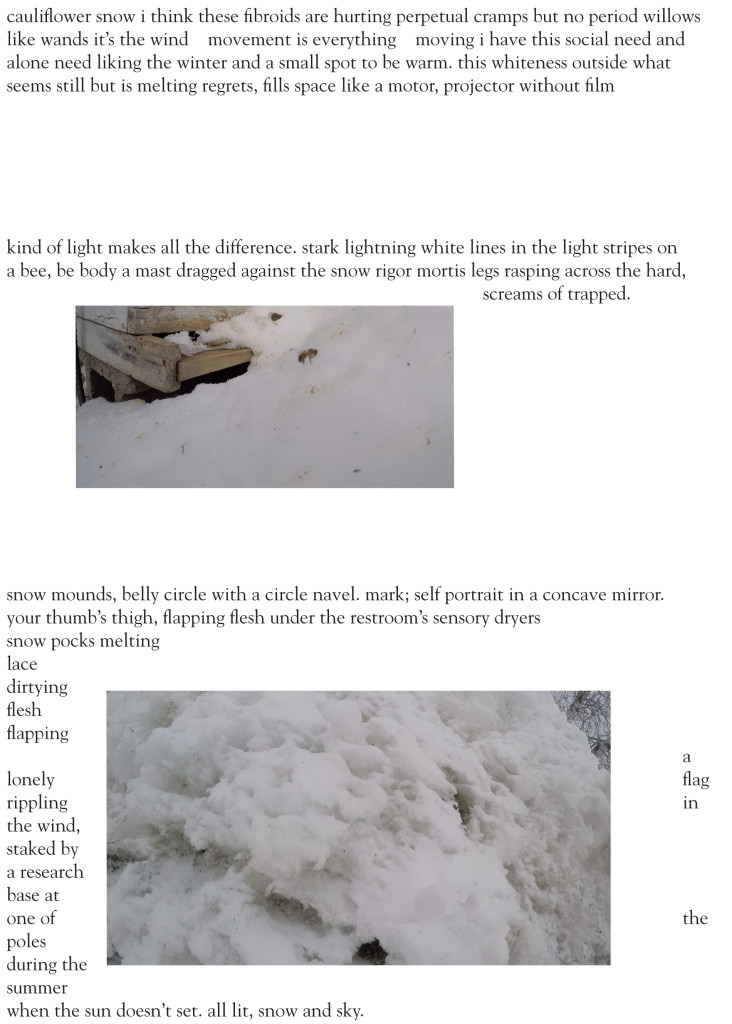 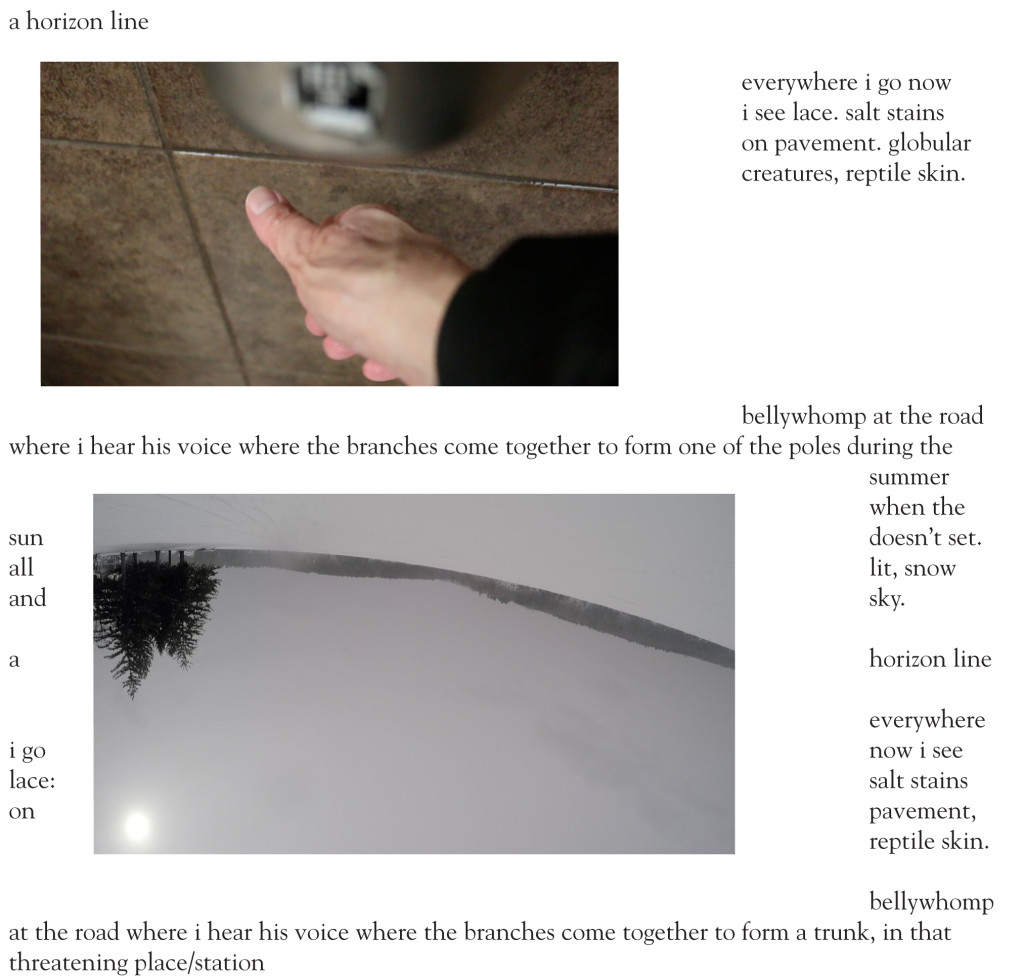 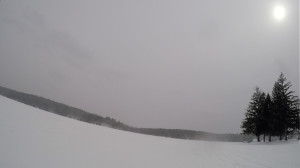 The images in “saidst” are stills captured from “Rose Winter,” a video created by Kathy High in collaboration for a 30-minute performance piece, Rose Secoming, centered on female aging, presented at the &NOW Conference 2015. High is an interdisciplinary artist working in the areas of technology, science, speculative fiction and art, and she has received awards including fellowships from the Guggenheim Memorial Foundation, Rockefeller Foundation, and National Endowment for the Arts. Kathy sent me a short excerpt of her as-yet unedited video to see what I thought, and it was incredibly uncanny as some of the images in it corresponded with images I had just begun writing in the poem that was to become “saidst.” This coincidence prompted me to begin writing/playing off of images in Kathy’s video as I saw them, as she continued to send me excerpts in the process of her editing. I played the images as if they were music and we were in the midst of a jazz improv.

Speaking of improv, the poem’s title spoke to me by chance somewhere along the line–a typo!

Early versions of “saidst” didn’t include any stills from “Rose Winter,” and a while later I began to experiment with including stills from as the poem and video were joined/compressed in my mind. It took many tries over a period of several months to find a way to include the stills in a way that felt integrated with the poem. I always find it scary to not have a road map to follow, artistically speaking, but also feel at home, creatively, in the challenge that being on my own entails.

Kathy High and I are now working on a multi-media piece that includes video, audio of “saidst” being read, and music by composer Pauline Oliveros. 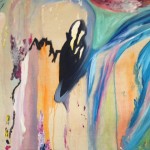 Shira Dentz is the author of two books of poetry, black seeds on a white dish (Shearsman) and door of thin skins (CavanKerry), and two chapbooks, Leaf Weather (Tilt / Shearsman), and Flounders, forthcoming from Essay Press. Her writing has appeared widely in venues including The American Poetry Review, and featured at The Academy of American Poets’ Poem-a-Day series, NPR, Poetry Daily, and Verse Daily. She’s the recipient of an Academy of American Poets’ Prize, the Poetry Society of America’s Lyric Poem and Cecil Hemley Memorial Awards, Electronic Poetry Review’s Discovery Award, and Painted Bride Quarterly’s Poetry Prize. A graduate of the Iowa Writers‘ Workshop, she has a Ph.D. in Creative Writing and Literature from the University of Utah, and is currently Drunken Boat‘s Reviews Editor and teaches creative writing at Rensselaer Polytechnic Institute in Troy, New York. More about her writing can be found at shiradentz.com.