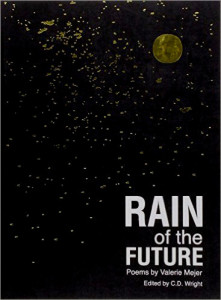 Sometimes I read a book of poetry that is so perfect, that I love so much, I can’t think of anything more to say about it. The poems can’t be summarized, described, conveyed: they are themselves the minimum and only possible expression of themselves. It doesn’t happen very often, one every year or so, and Valerie Mejer’s Rain of the Future, in impeccable translation by A.S. Zelman-Doring, Forrest Gander, and C.D. Wright is such a book for me.

The poems work in a blend of surreal imagery and melancholy intensity, with an uncertainty that is so often missing in contemporary English-language poetry. The willingness to leave things unexplained, uninterrupted, undone. To accept approximation as the act of reverence for the utter impossibility of expression, and to inhabit that approximation in a way that constructs a new reality. That simultaneous loss and gain of a poetry that can never reach what it aims for, and yet hits exactly its unintended perfect mark.

I often argue for translations not to be published side-by-side with their original works. I think this practice, especially with commonly-read languages like Spanish, encourages a kind of language-police reading across the gutter that I find irrelevant at best and distasteful at worst. The kind of nit-picky literalism that doesn’t consider carefully the implications of literary translation: that each word is a choice among many, that there is no exact equivalency, and that this is not a failing. But in this case, the presentation of the Spanish alongside the English was a gift, at least for this reader. A gift in that I was able to actually see the brilliant choices the translators made in places. Take the last stanza from “Of the Known and the Foretold”:

The translators render it as:

The reversal of clauses in the first line are strictly unnecessary, as in there is a grammatically correct and more literal way of rendering it: “And I don’t know the floating city”. But (to my ear at least) what they chose shifts the register of the entire stanza; by introducing the object and then telling us that it’s unknown/unknowable we are surprised at the level of the line, and then again at the level of the stanza. The tightening of the second clause in the second line is also brilliant. Literally it’s “through doors that beat/whip,” where “azotarse” is being used figuratively. The choice of “thrashing” for “se azotan” is not perhaps obvious, in fact, it was not even one of the words that I thought of when I first looked at the Spanish. It’s a departure, albeit slight, from the exact literal meaning of the original. But it vastly improves both the image and the sound of the line in English. Finally, the last clause, which is so brilliantly rendered in translation it stopped me in my tracks. Literally, “será todo” means something like “it will be all/everything” and so the translation takes a positive statement and turns it into the negation equivalent. By doing so, it captures the impulse of the future tense without actually needing the relatively cumbersome future construction in English.

All these choices, and the many other brilliant decisions the translators made throughout the book, seem to serve a particular purpose (to my ear), which is the construction of a mythopoeic register. From the very title, Rain of the Future, we’re in a land of speculation and prophecy, of dream and myth. Here there are giants: “Someone said ‘The sea is the earth’s blood,’ in the voice of a giant who loved me. Maybe he was green and the air blew through him. Maybe he was a tree. Maybe you’re a tree.” (31). There are skeletons that live at the heart of the jungle: “At the center an enormous animal lay dying. Little by little his skin retreated and vultures finished it off. … The only living part of his body is that with which he speculates.” (61). There are dreams and hauntings, that are beyond language:

I only spoke to tamp down the turbulent silence of the whole night. … All this I say but not in my own language. Asleep we know so much. The mares multiply and you tell me this could have been a nightmare. But a nightmare is a single mare in the night or the night turned mare.
(31).

This realm of uncertainty, of imagination and sentiment, is one that may be somewhat unfamiliar to readers of mainstream English-language poetry; but it is a definitional mode of Spanish-language poetry, and Mejer inhabits it fully. This selection of poems from across her oeuvre have that register linking them together, and the recurrence of certain threads (skeletons, nightmares, the failure of language, premonition). I comment on this only because one of the great challenges of translating Spanish-language poetry into English is that of register. The mainstream English-language poetic tradition abhors sentiment, excess, and uncertainty. It is afraid of intense feelings (sentimental, cliché), and of openness to uncertainty (unclear, abstract, unintelligible, impenetrable). Spanish-language poetry (along with many other traditions of poetry) instead often embraces these things, revels in the inability to express certain things, the falling-short of explanation and clarity, and the intensity of expression required to take such leaps. This poetry does that, and it is not afraid. It is not afraid of the poetic register, or the mythic tone. It is not afraid to say that it doesn’t know: “Maybe something like the night in the deep hollow” (35).

For those of us willing to trust the poet, and her translators, and willing to not demand answers from the poetry, this book will reward richly. As Chilean poet Raúl Zurita says in his introduction: “The capacity for unfoldment in Valerie Mejer’s poetry, for the revelation of an inner space that includes the exteriors which so define the poems, is, as with all great poetry, an experience of language’s materiality, its history, its implications and automatisms.” As I’m trying to conclude this review, I’m sitting at my desk where I have a picture of my aunt on her wedding day. She died of breast cancer when I was 11, and I don’t remember her well. I got the picture from my uncle’s house, after he died in a plane crash, leaving my father the only one of his immediate family still alive. No one else wanted this picture, not my cousins, her children, nor their children, her grand-children that she never met. It’s from the 70s, square, sepia-toned because of its age and fading. My aunt is in the bottom left corner, just her upper body and face, at an angle. The picture was clearly an accident, it’s focused on the edge where the wall meets the ceiling, and shows the recessed lighting of the reception hall. My aunt is holding her bouquet in one hand, her veil pushed back. Her arm is linked through her husband’s. She is looking ahead of her, and smiling. She is not smiling for the camera, she is smiling for her future. For the possibility it held. I look at it and I imagine that future that she was seeing. And I come back to two poems from this book, neither from the poem about Mejer’s brother committing suicide. Neither directly about loss and sorrow and grief and possibility:

I would have replied but I didn’t know the answers and worse, both times I woke and scribbled urgent letters it only saddened me. So go the days. Made of hours. Not of centuries like the night.
(33)

The altitude belongs to the air. There is the rain of the future: where I am: behind drop cloths, ready, mercurial, sad. The place is where it will be. I am where I will be. 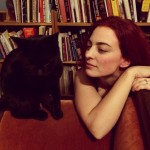 Erica Mena is a poet, translator, and book artist. Her book­length poem Featherbone is available from Ricochet Editions. Her translation of the Argentine graphic novel The Eternaut by H.G. Oesterheld & Francisco Solano Lopez is available from Fantagraphics. Her work has been published in PANK, Vanitas, The Kenyon Review, The Iowa Review, Asymptote, Words without Borders, and others. She is the Executive Director of the American Literary Translators Association, Editor of Drunken Boat, and Founding Editor of Anomalous Press.

← Erica Mena: “Attempts to Generate a Field of Potential Translations with Silence”
Adam Fagin: “traversing the interval”: Notes Toward an Enantiomorphic Emily Dickinson →