excerpt from
The Book of Fools: An Essay in Memoir and Verse

It was widely known there were problems with the lyric. Orpheus came into the world singing because he knew nothing of the world. As for me, I’m no different from every other person you are liable to meet and be held responsible for. The way a flower is a little like a mountain is a little like a flowerpot is a little like the deer on the side of a flowerpot who, startled by this talk, retreats, while her baby pauses at the edge of brush, and looks back, not yet fully schooled in fear. Like the black girls at my high school with corn rows and strollers who said “That will teach.” Or like trying to swim back to a moment when the current keeps pushing you out to sea. Like trying to plug a leak in the wall of earth you drilled through. Or trying to pile as many people as possible into a cell phone booth formed by the word “you.” Like plastic that can be molded into any shape; at daybreak, at dusk, we melt the words down. There was something we shouldn’t have done and we did it. Now if I could run forward, now if I could run back, I would I would. She was pounding on his chest, the whole thing must have taken just a few frames up from the cutting room floor. As if it were a genie or a snack machine that wouldn’t dispense. Eve came to this world naked because she had never been touched. The one wish she thought she’d paid for. And they say Old Hank sang because his back hurt so much he couldn’t do nothing else.

“[Orpheus]” is an excerpt from a book-length poem, The Book of Fools: An Essay in Memoir and Verse, that situates a number of experimental techniques within the larger arc of an accessible narrative and that hopes to reconcile historically divergent aesthetic modes. It also marries personal, confessional themes to global, ecological themes. The narrative center of the story, barely evident here, concerns a narrator driving a dying mother to the sea, against a backdrop of ecological loss and global conflagration, but the poem also investigates a complex mixture of further themes, including childhood, coming of age, memory, myth, the underworld, borders, and artistic representation. In a way, the whole book-length poem sprung from a single one page lyric, “First Taxi,” a poem which, after I finished it, felt successful as a simple, lyric poem, yet I felt utterly dissatisfied for its easy emotional statement closure. I felt there was a complexity of personal truth and experience that was not possible to express within a classic lyric—all the more because the borders of a personal self seemed untenable when global conditions and information had become an intrusively intimate part of personal experience. The entire book-length poem is thus the quest that followed, pursuing a more complex personal truth and a more complex composite of aesthetic styles.

The first step in following this quest was a self-erasure that lyrically-distilled “[First Taxi]” into another text [http://www.tupeloquarterly.com/first-taxi-by-sam-taylor/]. I was drawn to self-erasure for a variety of reasons. First, it is a way of having alternative levels of poetic construction simultaneously present, one a lyric narrative and one an act of pure lyricism that can either distill the first text or complicate it. Second, I think erasures are a beautiful phenomenon, but at a certain point I feel some frustration over the fact that the ‘poet-makers’ aren’t actually writing anything. I therefore liked the idea of writing something and then erasing my own work, especially for how it confronts attachment, enacts the inevitable process of time, and foregrounds the process of a text’s emergence and construction from a larger sea of available language. Thus, I intend what you see to be read as one larger text, the lighter portions of which are then erased to reveal a second text. Finally, this process of self-erasure seemed to speak directly to the book’s concern with memory and death.

As for this particular excerpt, [Orpheus] seems to be a stream of consciousness recon-mission, with roots in both surrealism and confessionalism, that dives into the available psychic sea of language. The first line, “It was widely known there were problems with the lyric” is a refrain that appears several places throughout the book, and Orpheus, plastic, ocean pollution, and childhood trauma are all also major themes that first emerge here. [Orpheus] is the fourth piece of the sequence and the first full lyric after [First Taxi], which appears second. Perhaps, then, this piece represents the first step in complicating the too easy statement. It is thus the extreme of flotsam presented with little narrative order, its only structure the energetic dive toward psychic truth. The whole thing is the opposite of Yeats’ gyre: from a wide circumference, it funnels centripetally towards a charged, central event in the personal underworld, then resurfaces. Still, this is one of the few pieces within the book-length poem where the erasure probably presents a clearer semantic take-away than the erased text. Most of the long poem will occur in between the two extremes of [First Taxi] and [Orpheus]. 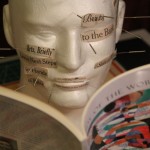 Sam Taylor is a word artist interested in a wide range of poetics and mediums. He has a book of highly accessible, politically charged poetry, most of which you would never see in Omniverse, that will appear this year (Nude Descending an Empire, Pitt Poetry Series, Fall 2014). His first book, Body of the World, is available from Copper Canyon. This excerpt comes from a third book, The Book of Fools: An Essay in Memoir and Verse, excerpts of which have been published in The Tupelo Quarterly and are forthcoming in The New Republic. He is the 2014-2015 recipient of the Amy Lowell Traveling Scholarship, and he teaches in the MFA program at Wichita State University. www.samtaylor.us.