the notion that the laws of reality
cannot be changed
is an assumption.

atoms are made up
of leptons. eves, too.

that which hides
in the higgs bosom.

none of us is telling the truth.

night sky, in its mostly darkness,
is the most banal of mysteries.

who stands in the middle of the field?
a better science.

no one pulls out here.
we champion the ignorant light.
measure in lumens human densities.

tell me—
are you with me?

it’s the conversion of something
into its opposite

it is the only way to move.


words are seen through
not as if invisible, like a scrim

that is as a way of seeing.
the choking city

bleeds out its light
into the black atmosphere.

the future, then, is the sky
protecting by way of light—

take the word horse back
to its root: from the dutch ros
then later kurs, which influenced

the latin currere, to run
where we get current, new.

Both of these poems are meditations on moving, in the figurative sense (to migrate from one status to another) and in the literal sense (to migrate from one location to another). Both poems are routed through the speaker’s relationship to science and language. The poem ‘enantiodromia’ contains found language from PRI’s Science Friday and Dubstep/EDM artist James Blake. The language from those sources is italicized and braided with the consciousness of the speaker in limbo. Enantiodromia is the Greek term for the conversion of a thing into its opposite. The poem ‘north’ investigates the etymology of a word. In both poems, the speaker receives language and interrogates it; in so doing, he interrogates a relationship to being. These interrogations are the same. “north” is dedicated to a friend and a poet. She, like the speaker, undergoes change. 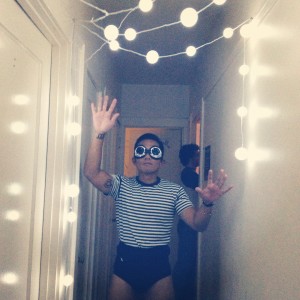 Robert Andrew Perez lives in Berkeley. He is an associate editor for speCt!, a letterpress imprint based out of Oakland. He helps curate readings at the speCt! studio and University Press Books and occasionally emcees for the Studio One Reading Series. Works can be found in The Cortland Review, The Offending Adam, The Awl. Poems forthcoming in Diagram and Manor House Quarterly.