THE MOUTH LOOKS IN THE MIRROR

Some days the mouth learns how to emit laughter. Or
shut up and let this life be lived. For its being everything
is contingent upon an empty sink. Dinner. The wash.
The mouth and its immaculateness. It thinks
in a soprano voice would I have been a good singer.
The song is not called llorar y llorar but the mouth
knows its refrain.

Bewildered, the mouth in refrain
looks up, seeing itself spoken in name.
Recognize how it learns to conjure gestures
of a presence. Pucker. Spitfly. Llorar y llorar. All
but mouth itself knowing how to make its sound.
Some days the mouth almost learns to love
being unsung. Some days even the refrain
learns how to emit laughter.

THE HISTORY OF ORPHANS

The history of orphans notches into us
like this: I show the inheritance in my hand––
say look: here is the child.

The kinpoint bears the canyon
& in canyon is the jungle. Within
jungle bearing machete hip side, here

the child, bearing kinpoint
upon index. Charting northward
to make a lapse where someone will want

to explain. North, a door opens toward
the hole of the capacious. No word but
a blade to shudder at blade. Halfway

across the radius one more descends
toward the ocean bowing into blow as
in prayer. Records make themselves known

by what is raised. Interior of my interior.
That which gave us name for impossible devotion.
To be of peace. Cut the blade. Will blade to fall–––

deep in the pigment of the clearing
we carry: everyone we will never know.
In rearrangement to grow, evergreen: here
the children, I now the mother.


TO BE THERE IS TO BE WHERE YOU ARE

The horizon line is where all expanse recedes into its contrasts. Sky into land. Sea into sky. Sea into light. There, in the density of that slenderness, is where it is said the hereafter begins. A near haphazard blur. So long. To have loved one who loved that density. To swim toward it with a wild stitch, to be caught in the chainlink of its fringe, unravel into an ache of one’s own possession before learning to see. Before we all see: the dark blur of a cutting boundary. The possible. Take the beloved who loves the body. Beloved loving the body before them. So long. In time it is harder to measure breath consumed with what cuts through it and not what it wants to cut away. So much time spent looking into that softness, into that black hole mud. Take your eyes and put them there, on the cut, that which you keep swallowing. You become the line you swallow, spun out one into the other. From your mouth spills the thread. Every gesture closer but never quite. It keeps us present. Take your eyes, put them on the line of yourself, the thread, pull hard on the boundary. Take my eyes. Beloved and I. You in myself. You disappearing into yourself. Deep in a lyric ascribed to someone who only dreamt in logic and color. To be body or anything there is curious, you said. And me, I said. How is that to be eternal.

Spasms never stopped a flood
& vexation weighs my muscle
so guttural in intensity. Hold.
Let us hold our heirloom grief.
A suspension, one from its own
chronology. Come out over
the body. I want to take in a little
piece of vision with you. Do you
see how far we are now? What
do you remember? I feel something
imminent as a tremor. To be
translated & bear from memory
the head of an animal who meets us
where they are. Let me turn now
toward you in the dark. Let me walk
beside you. Let me walk the rise
with you, disappear. Away from land
I just want to hear myself out of time.
To prepare the imagination for when
the undergrowth swallows us whole. 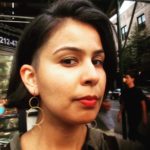 Maryam Ivette Parhizkar is a poet-scholar, occasional musician, and author of two chapbooks: Pull: a ballad (The Operating System, 2014) and As For the Future (Portable Press at Yo-Yo Labs, 2016). Her recent writing has appeared in Amerarcana/Shuffle Boil, Bone Bouquet, The Recluse, Social Text Online and other places in the small press and digital spheres. She serves as an editorial board member of Litmus Press and is working toward a Ph.D. in African American Studies and American Studies at Yale University.