in going back for your keys,

weak mewling at the foot of the promontory    it seems

no one is in charge of the dream sequence

the red oak has your form
in mind
has already distributed

pamphlets to the upturned faces

they are on the lookout for
your mobius

do not dash their illusion
what has been said of you

a dagger at the end
of each


“Police Report” is part of the 12-poem “Suite of Movements,” which I wrote for an independent study with the amazing University of Michigan Professor of Dance Peter Sparling.  For a long time, I have been drawn to classical and contemporary dance, and specifically, I have wondered what it would look like to strip the moving body of the trappings of performance…to think and see beyond lighting, setting, costume, music, audience, original storyline, etc., and simply to write the narrative of the body in motion.  Beyond that, the only magic involved in the creation of “Police Report” was the extraordinary pleasure of watching the Balanchine performance over and over again.  The “Suite” constitutes the third section in my next manuscript, Mercies in the ‘American Desart.’ 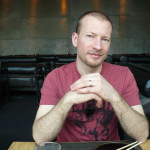 Benjamin Landry is a Research Associate in Creative Writing at Oberlin College and is the author of Particle and Wave (Chicago). His poetry has appeared in Crazyhorse, Denver Quarterly, The Kenyon Review Online and elsewhere, and he reviews and blogs at benjaminlandry.wordpress.com.