On August 28, Hazel White performed this work at the For-Site Foundation event at Yerba Buena Center for the Arts, San Francisco, in response to Nathan Lynch’s sculpture installation, “Dead Reckoning,” in the BAN7 exhibition. (Images courtesy of Nathan Lynch.) 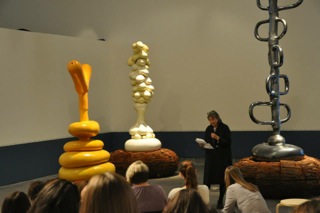 1.
Once upon a time, “Let’s suppose it is 3,000 years ago and you have transported yourself into a fisherman’s boat, far from land,” John Edward Huth begins his book The Lost Art of Finding Our Way. The fisherman, I want to place her in a spinning yellow donut, “sings to himself as he hauls in a net from the sea. . . . You ask him, ‘Why is it warm in the summer and cold in the winter?’ His outstretched arm traces an arc toward the sky, and he says that the Sun takes a high path in the summer, and the days are long; but in the winter the Sun has a low path, and the days are short. His voice has no hint of uncertainty.”


2.
Here I am, at my point of departure. I am a poet, so I’ve written a sonnet, 14 lines of thought, composed over the last 14 days in reference to time and place and the title of Nathan’s sculptures, “Dead Reckoning.” Nathan begins, he says, by “rolling out the clay into ¾-inch-thick slabs, like floppy sections of plywood or heavy thick fabric.” As a poet navigator, I’m beginning with a structure of 14 lines, which feels sturdier than aiming for a distant and invisible point on an empty plain. Like a sailor, I’m heading into the wind on my way out, during the first eight lines, in the hopes of all of us enjoying an easy return.


3.
Setting off, one wants a cheerful adventure tale and praise. Yet each point of departure is pegged on a grid of past experience. And I am freshly arrived from a site project that is in part about the military. August 7, Museum of Craft and Design, three miles south of here, Ehren Tool, a large man, a potter now but a Marine during Desert Storm, takes the microphone and explains the only statement he is comfortable saying is “I make cups.” Each cup, nearly 15,000 of them now, tells the story of a veteran, is a gift to the veteran, with Ehren’s wish that it facilitate communication in the veteran’s family or community. He doesn’t like the microphone. He ventures that he wishes he could do more than make cups. What’s unspeakable floods the room; language founders in the distance between his military service in the First Gulf War and our understanding. The water begins to rise, and a woman in the audience searching for an oar questions him about the accumulation of horror he hears in the stories—and his voice breaks. 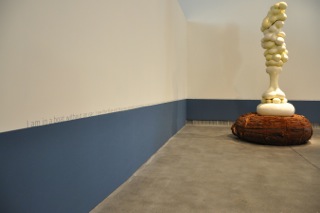 4.
Peril: A loss, an absence of shape, a change of weather. I do not know the ocean, but I have read that there are tripping buoys, wreck buoys, tsunami buoys, and military buoys that release light and smoke. I have seen a map that puts the waterline sometime this century at Folsom and 5th Streets, a couple of blocks from here. We do not know what this area will look like then. The evolutionary interactions among natural processes are so complex, it’s impossible to predict which species will be here, which habitats will have gone.


5.
We are all navigators. Place and language provide the syntax of our movement. “A go is what you have,” writes poet Bhanu Kapil. On land, we move forward toward light. We have a preference for high places, to gain a large perspective and see what’s advancing toward us, and we seek shelter. As we travel, we are encouraged by any sense of plenty—flocks of birds, reflections of sky on freshwater, news of environmental and social justice, and signs created by people who have walked before us: piles of stones, say, or donuts and pillows or a ladder rising into the air. We long to be always upright. We dread a flat continuous horizontal with no signs of life or habitation.


6.
Dead reckoning has an inherent percentage of error, which grows larger as time goes by. Like everyone else, I’m spinning all through this sonnet time in news breaking on the Internet from Gaza and Ferguson. I’m in a worry of direction. Research shows a lost person proceeds randomly, first in a straight line this way, then suddenly changes direction and later turns again randomly. Eventually, as search and rescue teams know, we are likely to spiral and show up back close to where we began. 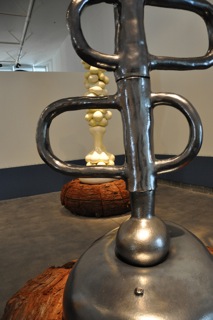 7.
My first reading in a museum space was just across the street, in 2008, a month before the presidential election. I responded to a public invitation by artist Tony Labat, working with SFMOMA, to perform a one-minute monologue on the theme of the Uncle Sam military recruitment poster: I Want You. We were to imagine for one minute we had the pointing finger and a voice of authority. I wrote:

I want you to find Barack Obama in the face of every young black man. I want you to recognize intelligence, kindness, and concern about our society in the faces of all young black men.
Most of us have been trained to believe that just one color, whiteness, is synonymous with goodness. We’ve been persuaded, silently, against our integrity, to make young black men, like my son, and young black women, like Obama’s daughters, invisible. I want you, I want us, to acknowledge that reality, un-train ourselves, open our hearts.
Reflecting on his experience of racism, my 10-year-old child asked me to tell you this: “Think before you speak. And only speak positive words.”
I want you to end racism, thought by thought, word by word.

8.
Ferguson and Gaza. We rage, and tremble to describe this place we are in. “What comes after?” Nathan asks on his waterline.


9.
“What I have been thinking about lately is bewilderment as a way of entering the day as much as the work,” writes Fanny Howe in her book The Wedding Dress: Meditations on Word and Life. In the introduction, she describes raising her three biracial black children in Boston in the 1970s. She claims “bewilderment as a poetics and a politics,” an idea she developed “from living in the world and also through testing it out in my poems. . . . For me,” she writes, “bewilderment is like a dream: one continually returning pause on a gyre.” She considers herself a spiral-walker: “there is no plain path, no up and down, no inside or outside,” she says, “But there are strange returns and recognitions.”


10.
I’m sensing landmarks lining up with each other, so I’m better able to fix my position. And the wind is now at our backs. More clear-headed, I realize why not ask for directions! Nathan, I say, what’s your process? He replies: “For the donut rings, I cut out a flat circle with a hole in the middle, and it begins by growing sides or walls that lean out with gravity as far as they can without falling. It’s a game really, balancing the weight of the clay and the force of gravity. . . . They are unreasonably thin for their form. A cone or cylinder can be made quickly—the form holds itself up. Making a pillow is slow and difficult—all that clay hovering out over an open space. When I am excited I often build too far up too fast and have to cut it off before it falls over. The white one nearly did fall over.”


11.
Risk is survival advantageous. Although humans love shelter, seeking prospect and taking risks exercise our survival skills. As I advance into unfamiliar territory, my mental map reshapes itself, and the place cells in my limbic brain fire rapidly in triangles. In that primitive part of my brain, layers of memory and emotion and past experiences of resetting myself are providing cellular orientation. In a minute I think we will see land.


12.
I’m handing over the language of arrival to Gertrude Stein. “I really do not know that anything has ever been more exciting than diagramming sentences. I suppose other things may be more exciting to others when they are at school but to me undoubtedly when I was at school the really completely exciting thing was diagramming sentences and that has ever been to me ever since the one thing that has been completely exciting and completely completing. I like the feeling the everlasting feeling of sentences as they diagram themselves. In that way one is completely possessing something and incidentally one’s self.” 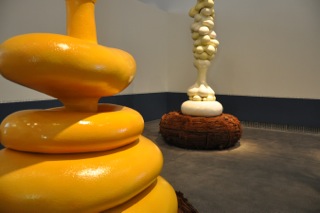 13.
Navigating, rolling out and piling clay, making noise, risking voice. I propose in the full tide that’s flowing now that what we are searching for is not a paradise of certainty, not that forever-lost place, but rather a longed-for wave of place-making verbs tall with diagramming excitement and forward motion that will tumble us into something new. In late August, twenty-three years ago, the USSR collapsed suddenly. “The pace [of change there] in the third week of August,” wrote John Berger, “was no longer that of an historical process but of a sudden resurgence of nature. It resembled fire, wind, or desire.”


14.
I offer this last line of the sonnet to you: “Each of us is a navigator,” says Huth, in the book I quoted from at the beginning, The Lost Art of Finding Our Way. How are you making your way? How should we describe this place we are in? For certain, we have mental maps, diagramming energy, and beacons we can share. Would anyone like to toss something out into this arriving place between land and sea? 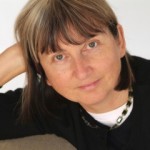 Hazel White is the author of Peril as Architectural Enrichment, which was a finalist for the Northern California Independent Booksellers Association Book of the Year Award, 2012. Her poems have also appeared in VERSE, Denver Quarterly, Eleven-Eleven, and New American Writing. She has performed place- and time-responsive work at many sites, including Headlands Center for the Arts, where she is an affiliate artist. Battery 129, Marin Headlands, an ongoing project, is taking place on Facebook.