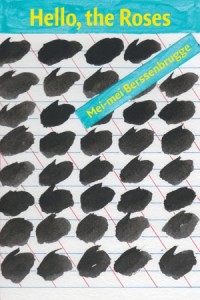 At each knot in Indra’s infinitely extended net, a hanging jewel reflects every other jewel—thus, Vedic mythology symbolizes the interconnectedness of all things in the universe. Calling to mind this architecture, Mei-mei Berssenbrugge’s latest collection, Hello, the Roses, explores interconnections between being, meaning, and the apparently separate world. The experience of reading it is bracing and enmeshing the way a long period of meditation can be. The tone, both intimate and composed, places us in a vast space.

Berssenbrugge’s subject is the experience of form, energy, space, time, as mediated by walking in the woods; communicating with others, including animals and plants; friendship; memory; seeing. Images and gestures in these collage-like poems accrete, resonate directly or tangentially within sections, across pages. The poet uses assertions, equivalencies—“Certainly, one’s tie to an insect is imaginative truth” (4)—to construct and propel the weave. Sentences unveil connections the speaker not so much discovers, but participates in. In “Green,” the speaker acknowledges, “I’m trying for a connection between lady slippers and my attempt to describe them, but I am my contact with green.” (43) In “Karmic Trace,” the speaker states her mood “is desire to interweave here with green.” (80); in the second section, a bumblebee passes in and out of the speaker’s shadow, “shining, then shining again.” Among many other echoings, the bee’s journey is mirrored:

Its outline on moss is the outermost topological surface through shaded space between bee and ground.

Before, I and mossy trunks or I and she did not inhabit the same space.

There wasn’t depth between myself and trees, since I saw them from a place outside their world in the audience.

I could slip along an alignment, vector or corridor, feeling my care and affection, then slip out and transform care into just the periphery of a spacious interior.

The green cave of a waterfall has this sense of interiority of surrounding cosmos. (81)

Here, and elsewhere in the collection, the poem becomes an encounter with phenomenal density—a drifting alder leaf, mergansers, a rock covered with yellow oxalis—in other words, perceptual space. The speaker views relationship as simply different ways of describing “the same sky, same ground, rain” (80). The phenomenal world and self are found to be intrinsically linked: “There’s a sense of place as continual emergence from implicit existence and from the aspirations of inhabitants.” (83) Later in the poem, seeing a crow becomes “a streaming exchange of myself with the bird; […] my body became a kind of distributed thing and the land a kind of distributed feeling.” (84) The page is a two-dimensional surface, yet reading this work feels reminiscent of the possibilities of meditative experience where space expands, time blossoms.

One of the ways in which Hello, the Roses performs complexity, creates hyperspaciousness, is through Berssenbrugge’s construction technique. In these multi-part poems, the prose sentence and the white space in which it is enclosed serve as nucleus. Each section groups several to a dozen or more such nuclei (magnetic centers, strange attractors?) to form a grid, a verbal matrix, in which “Distance is a kind of quantum bond, like an attachment” (“Matter,” 18). As the author commented in an interview with Charles Bernstein, “I try to make language into a net for my meaning which tends to be emotion in continuum with some perceptual or conceptual slant.”

How to make language reflect cosmic nexus, when reading or listening is linear? Revisited images and associations enact multivalency. Linkages arise, echo over distance (within and between sections, between poems) and time (the movement of the reader’s mind). In the first section of “Pure Immanence,” for example, “animal,” “wing,” “sky” cycle, forming lattices; other more abstract phrases such as “principle of association” and “mobile relation to perception” (21) conceptually overlap. “Repeating becomes more like an associative process,” the speaker says in “Winter Whites” (27). Multiple routes trace connective paths, setting up resonances within the reader’s mind. Variations of the word “transparent” recur throughout the book, calling to mind clear nested spheres, or the celestial spheres in Dante’s Paradiso. There’s no avoiding metaphor—this particular map of awareness takes on shimmer.

In what other ways does the poet’s language reflect or enact cosmic mythos? Often, Hello, the Roses uses the first-person voice, inviting the reader to co-create. Synesthesia amplifies complex feeling-states: “Hue accumulates around my intense desire to recall.” (“Winter Whites,” 29); “Days are the colors of petals” (“Verdant Heart,” 56). Dense description stands in for perceptivity, for the capacity of awareness to embrace sensory input’s plentitude: “The half moon rising over trees sends shadows across water in complexities of light reflections, of opaque grasses, skunk cabbage, violet, indigo streaming into saturation like blowing sand.” (“DJ Frogs,” 39) Berssenbrugge’s universe is multifaceted, reflective across time: “An image was propelled into the present by knowing you in protean time; strands approach one another, bifurcate, intersect or become asymptotic with permutations.” (“Turquoise Shade,” 74) Informed by the vocabulary of science and esoteric discourse, fusion occurs, as in “The Mouse”:

If matter is trapped light, by seeing yellow flowers you restructure molecules, and you’re not as solid.

An event on the mandala loosens into probability.

There was ambition, unconsciousness of Clytemnestra and I, a mouse, was her mirror.

I drive with my family away from the oracle through a valley of flowering almond trees, and turn around without realizing it.

That space was concealed within the illusion of my body, an emergence place.

If I mistake an angel for a stone statue, I look closer, not elsewhere, to see there never was stone.

My perception was far more inaccurate than the illusion. (11)

The complexity of this net insists we slow down, absorb deliberately. As in a meditation where we enter into the eternal Now, most of the sentences in Hello, the Roses are written in present tense. As in a walking meditation where we feel the whole of our body moving through space with conscious, heightened accuracy, interiority opens into landscape: “Autumn-blue sky between branches narrates a kinship between air and awareness, anima and atmosphere.” (“Karmic Trace,” 80) Discriminating mind is arrested by the precision of the language of engagement, as in: “The green shadow is a two-dimensional reality that exists seamlessly upon three-dimensional undergrowth of saxifrage, reindeer moss, cinnamon fern.” (“Green,” 44) Here, the sentence gathers color, light, dimensionality, and specific forms into a complex whole. The effect of these modes serves to create a language web that occasionally ventures toward aphorism or rapture. Being becomes ecology.

In the final poem, “Immortals Having a Party,” Earth rounding through space enacts the passage of a year. Images of lightning, the morning star, the eclipsed moon, remind us that matter connects to radiant bodies, is light. In part 2, origin story is suggested: “my mesa comes into being in world, like love in divinity”; “every story happens,” the poem says, in a place “revealed to my family through celebration, cosmic time coming forth as beautiful pattern-time without age.” (88)

Picture raindrops falling on a pond’s surface. Another structural principle informs Hello, the Roses—radial wave motion—experience opening out from a center of awareness. The image of the rose punctuates the book; “for flora,” the dedication reads. “You and I nest within many such fields from a rose,” “Slow Down, Now” ends (54). The loved flower comes to symbolize the cosmic narrative Hello, the Roses becomes. In the final poem, the speaker tells us of finding openings “through the centers of flowers, the voice of a girl, through memories of black dragonflies weaving and breathing at dusk.” (“Immortals Having a Party,” 90) Look deeply into the jewel—you will find every other jewel looking back.

Throughout her career, Mei-mei Berssenbrugge’s work has been attuned to perception’s negotiable, shifting nature; from a poem originally published in 1979: “Now, on a hill I never noticed / between two close ones we’ve climbed, I see / at an altered angle.” (I Love Artists, 9) Hello, the Roses is her twelfth book. Over time her line lost lineation to stand as the intact sentence unit, a discrete moment of perception. There are no fragments here. In their sense of intelligence and accrual, these sentences function as field notes in an ongoing investigation of existence.

In work this encompassing, it is not hard to find guidance for understanding how the poet works, that is, her poetics, within the poems themselves. The first section of “DJ Frogs” ends with what could be a description of technique: “I like listening to night creatures and trying to bring elements into a composition in which any sound can be used by the breakbeat for anything.” (40) “I’m interested in the resonance of disjunction, of one twig next to another,” (45) the speaker says in “Green.” Making connections, the net is enlarged. “With symbol,” the speaker says in “Immortals Having a Party,” “I find my way through entropic time, exhausted space, to the garden.” (90) Ultimately, inquiry into connection takes us into meaningfulness. The garden here invites visiting again and again.

Einstein told us energy equals mass times the speed of light. Alan Watts offered that “consciousness ignores intervals, and yet cannot notice any pulse of energy without them” (24). “The luminous field of being has a pulse,” the speaker says in “The Lit Cloud” (70). Hello, the Roses can be read as a bouquet of these pulses. Sub rosa, under the rose, means to keep a secret. A fine structure enlivens the gap between things. A poet is a maker of connections. Mei-mei Berssenbrugge’s crystalline language illuminates the secret links, the elemental threads.

Watts, Alan. The Book: The Taboo against Knowing Who You Are. London: Sphere Books Ltd, 1973. Print. 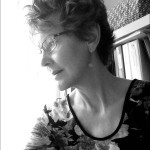 Mary Cisper lives in the Bay Area where she is completing an MFA in poetry at Saint Mary’s College of California. Her poetry has recently appeared in Terrain, Newfound, Field, Lana Turner, and Water-Stone Review.