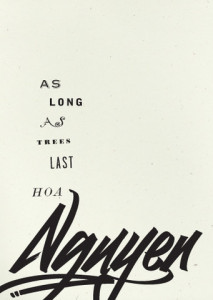 For the pleasure of listing them, here are some of the things you’ll find in Hoa Nguyen’s poems: watering cans, popsicles, “patch-on-the-ass-jeans,” a Spongebob Squarepants band aid. And for the thrill of invoking them, here are some of the apparitions that haunt her: Medusa, a Pegasus, the Mayan Jaguar God, Cassandra, a Pythagorean soul. In As Long As Trees Last, Hoa Nguyen’s poems exist in the crackling, energetic space between things and thoughts. Early in the collection, a pen decorated with hearts and feathers is metamorphosed into a human heart; “So obvious,” Nguyen says of this slight of hand. In this collection, there is little difference between the “heart pen” and the “heart,” between “surface” and “depth.” Rather than trying, as Wiliam Carlos Williams urges, to find “no ideas but in things,” Nguyen easily alchemizes the physical into the metaphysical and back again.

Most poems in As Long As Trees Last are rooted in a particular time and place: the years 2009 to 2011, in central Texas. This historical moment is marked by natural and manmade disaster, including economic depression, Haiti’s earthquake, Japan’s earthquake and tsunami, Texas’s ongoing drought, BP’s oil spill, the Mayan prophesy of apocalypse. Drawn from these days, the objects filling Nguyen’s poems feel intimate, as if we’re peering through an open door into a lived-in house. Nguyen gathers observations with eye-dropper-like precision, meting experience onto the page in fragmented, condensed samples that she invites us to examine closely and curiously.

The poems are composed according to a method of “extreme fragmentation,” as seemingly unconnected phrases, images, and sounds combine in collage-like compositions. The poems hold visual openness, as lines skate and swerve around white space. And, they offer grammatical openness, as Nguyen elides punctuation, allowing phrases to resonate into each other. Our own bodies are implicated in Nguyen’s formal choices. Just as the poems break open and “mix” up their sentences, she suggests environments act upon and transform us. “Rocket fuel” appears in samples of “breast milk.” Near an oil spill, human bodies become “oily.” By making syntax, images, and bodies seem porous, Nguyen sees “inside” and “outside” an experience at once.

Most of all, there is a sense of ongoing conversation. Overheard phrases and news bulletins fade in and out like snatches of chatter on a radio dial. In “I’m Stuck,” Nguyen offers several perspectives of unemployment:

What it means to be
out of work:
Write a crime novel
Work at a food bank

In these lines, it’s easy to hear echoes of Lorine Niedecker’s “folk” poetry: spare dialogs and soliloquys capturing the voices of working people. Nguyen’s overheard speech is sometimes ethnographic, creating an oral record of a marginal experience. But her poems cast a wider net than Niedecker’s, bringing in voices from friends, family, newspapers, scholarly articles, textbooks for learning Vietnamese. This conversation is multi-valenced and polyphonic, and we enter it from the point of view of many interlocutors. Sometimes quotes teleport a surprising presence into a poem; Nguyen shares conversations with her mother, with a bee, with the moon. She engages Dickinson, Olson, Spicer, Notley and Pound in dialog, weaving their language through her work as quotes or epigrams. Asking and answering questions also reshapes her environment, creating openness. She rolls the “[car] windows down / to ask” questions about the landscape she’s driving through. A trapped bee begs, “please / just open the door / to the sun.” Conversation turns “walls” into “doors” and invites what’s outside to come in.
One of my favorite poems in this collection, “The Problem,” poses this question: how clearly can we distinguish between ourselves and our environment?:

There is little distinction between nature and human in this poem. The speaker sees “planted succulents” and “preserved moss” as objects of consumption. Even a “flat rock” can be domesticated. Do people have to stop “wanting” things in order to avoid self-projection? In response, the cotton panties in the poetry book become a funny ars poetica, celebrating intermingling. The quotations, objects, and statistics spliced into Nguyen’s own language are the human artifacts interleaved in these lyric pages, an intimate convergence of thing and thought.

But what happens when things become our apparatus for thinking? If Nguyen’s poetry is so rooted in objects and landscapes, what does it mean that her environment seems to be crumbling? Her book is haunted by the image of a footprint, a physical mark that has become, in our present day, an environmental metric. Nguyen warns a woman in “Ridiculous Couplets” to “watch your carbon footprint.” She repeats, “I don’t wear shoes,” and ends the collection with the statement, “I wear soft shoes.” Walking barefoot may allow us to minimize our ecological footprint. But it also, just as importantly, gives us a point of contact with the earth and a physical medium for feeling.

Nguyen’s poems keep this point of contact while recognizing that both earth and feet are precarious. While meditating on the image of an injured hyena, Nguyen asks what happens to perception when our apparatus for feeling is compromised. We must

In this book, we may take our shoes off only to find that we don’t have feet. Through the phantom limb of an imperiled ecosystem, a rainless sky, and a destroyed city, Nguyen’s poems feel through a landscape to locate “troubles”: at once sites of rupture and areas for growth.

When I think about Nguyen’s resonant images and the ideas they invoke, I keep returning to the act of brewing tea. This gesture brings together two recurring motifs in As Long As Trees Last, cups and leaves. The most powerful “thing” in this book is a natural presence, the chinaberry tree. This invasive nonnative plant weathers drought conditions in the Texas landscape. As the book unfolds, the chinaberry tree becomes a sign of endurance and invasion, vitality and violence. Meanwhile, Nguyen’s “cups” are teacups, ceremonial chalices, and even the cups of the Tarot deck. Like the chinaberry tree, the motif of cups enacts doubleness. The “surface” of a cup is also simultaneously its “depth,” and it is both a container and an opening.

Tea is a way of bringing together these symbolic potentials for Nguyen. Near the center of the collection, she is able to imagine a substance formed from “leaves” brought together in “this cup of mine”:

Just as tea is distilled from leaves, “days” are distilled from a person. The image of a woman “out there / sucking at leaves” is an apt figure for the speaker in Nguyen’s work, who is struggling to distill something sustaining from the source of violence and resilience that the natural world has come to represent. Tea leaves are scattered, random and fragmented, but still can be “read” for significance. In the same way, prophetic, joyful, and warning messages arise from Nguyen’s fragments. 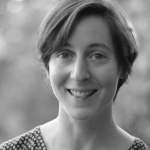 Liza Flum is a poet in Cornell’s MFA program. She has received fellowships to attend the Bucknell Seminar for Younger Poets and the Summer Literary Seminars. She is also a poetry editor for Omnidawn.