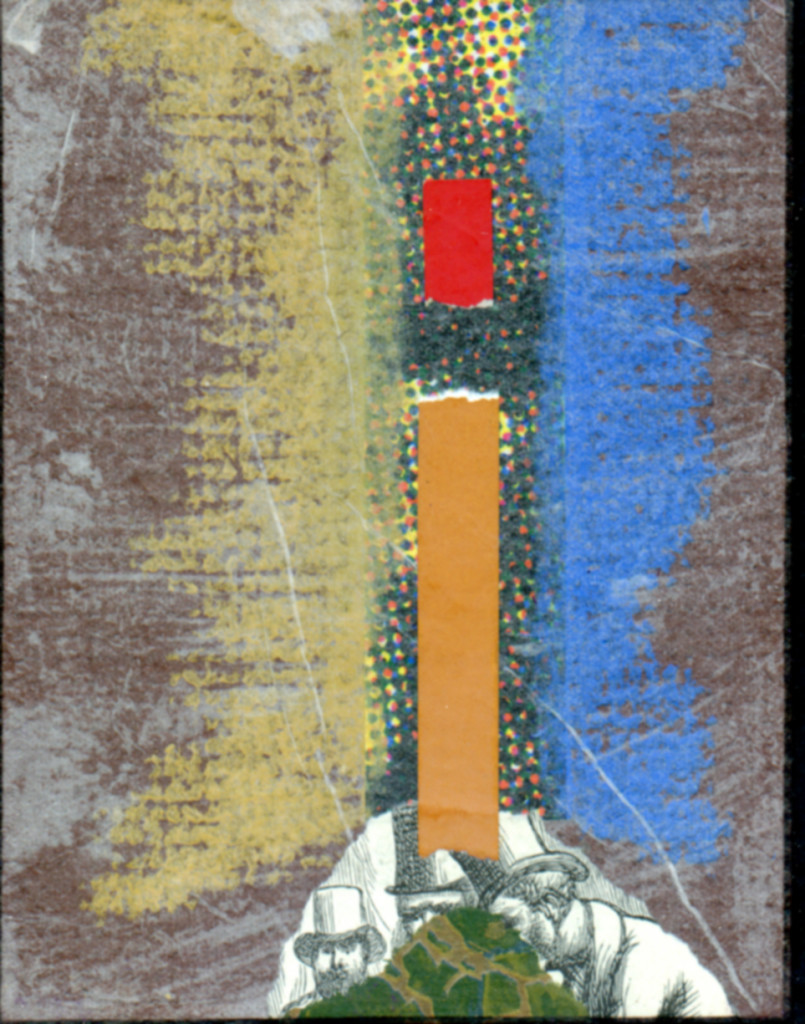 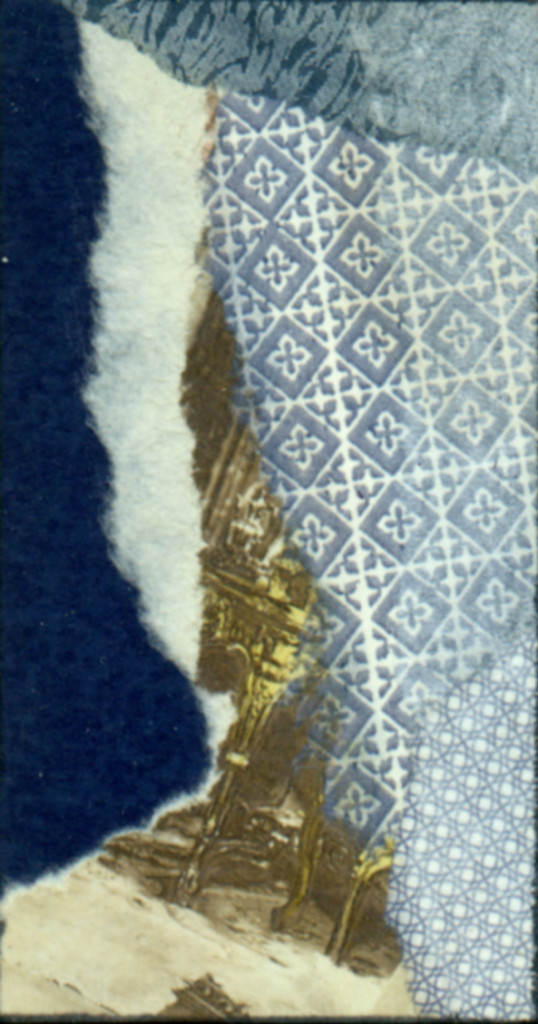 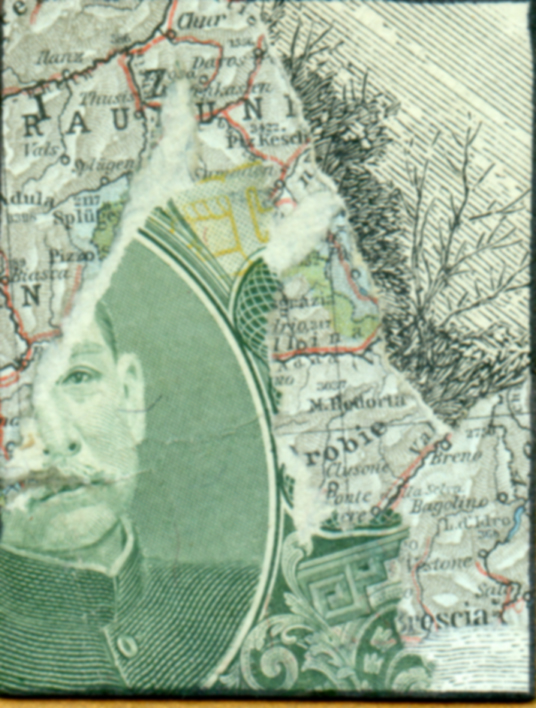 A Matter of Collage


I called my first book of poems A Windmill Near Calvary and wrote this for the dustjacket (where I had hoped to see the Brueghel painting referred to):

Things seem to collect around me, wherever I go, in the same way ideas occur as if from nowhere, and since I have always balked at throwing anything out I sometimes imagine my house simply a context for unexpected items. I write under much the same compulsion: whether local images or abstract concepts, whatever interests me I hold on to as best I can and a poem is my formal grip. Everyone knows how a painter can put the most disparate things into a single picture—Jesus Christ, for instance, along with a Dutch windmill—and they are seen then in a single light.

The third poem in that book (third merely because they are alphabetical) says something of the same, but more aggressively:

Some people try, before cashing in, to make
their lives into shrines. Mine seems to be turning out,
as predicted, a small provincial museum, the kind
that might have in some corner or other one work
you could be interested in, if you knew it was there.
Memorials and keepsakes hang around, half catalogued. Some
curiosa, here and there a whopper—who else
could maintain a scarlet nose drinking
Dr. Pepper? I have my precedents. Lots of men
shuffle off, leaving a ball of tinfoil too large to get
out of the attic or half a century of the New York Times
or some other mess. I keep everything. Old
gods and old ads fade together; both
show better on a neutral wall. Philosophies, old hat,
catch dust on a rack. The trouble is
I’m a glutton. The floor is cluttered,
the shelves go across the windows. I trip
sometimes over ancient arguments or
a lid I can’t place, or claim two different heads to be
Saint Thomas’s. Nothing, nothing will I
surrender. There is little enough as it is.
I may, of course, croak tomorrow, stumbling
from the larder, but I will not set
my house in order.

When the book was published (1968), I was thirty-five, newly arrived in a city with an absurdly affirmative name, and gluing down everything I could find. Anything small, that is; the few who noticed what I was doing were often appalled or amused at my refusal to spread.

My Windmill does not qualify as a collage book, although—like most of my work—it has collage elements. It was later, in the eighties, that I came closer, in Transcendental Studies (now published by the University of California Press); the middle section of that volume, “Falling in Love Through a Description,” is a series of twenty-nine poems. For each of them, I had taken three or four books as sources (all of them prose and all very different: e.g., a novel, a religious book, or whatever came to hand). I stole words or phrases—very seldomly a whole sentence—until I had a stanza. If that was, let’s say, a four line stanza, I kept making four line stanzas from the same books until it felt like enough. Then I typed up the newly arrived poem, rearranging the stanzas alphabetically.

The words from these books were chosen, so not absolutely random, but chosen quickly, paying as little attention as possible to content or context, much attention to sound. Once the words had become lines and stanzas, I felt at liberty to change words, to throw out stanzas or lines—in short, to revise—since my purpose was not to demonstrate possibilities of collage, but simply to find poems.

By that time I had piled up many collages of cardboard and pa- per, occasionally cloth or wood. (As with the poems, I never hesitated to add to them—with pencil or gouache or whatever came to hand.) Their first public showing was in Providence in 1979. Like the poems, these were made of materials as disparate as possible, picked because I liked their looks or, really, because they somehow called out to me.

Obviously such practice involves a great deal of chance: what materials turn up, what strikes the attention . . . But—except for things like alphabetic arrangement—there was really very little of the sort of “chance procedure” found in John Cage’s work or Jackson Mac Low’s (works I relish). Almost always, rather, it was “mon plaisir.”

I have always written rather little, but endlessly revised. To the extent that I employ collage, I have the happy possibility of revising what I haven’t written.

The cycle mentioned above, “Falling in Love Through a Description,” was published some years ago in a French translation by the excellent translator Françoise de Laroque. She noticed that in each poem the stanzas were alphabetical and said she would try to make them come out that way in her version. I insisted she do no such thing, that—in- stead—she should translate each stanza as seemed right, then rearrange the French stanzas alphabetically. I found the result admirable.

What an artist snitches (not necessarily from a work of art) will, in its new setting, sit somewhere on a line between collage and quotation. While in a specific instance these may be hard to distinguish, they are different uses. A quote keeps something of its own character and is read (or, in a painting, seen) as transcribed from elsewhere. A collage element, losing its substance, becomes part of a new texture and its former connections may be lost completely.

Collage, at least as I practice it, encourages abstraction. What might ordinarily hold a work together—character, for instance, or chronology—often loses out to foreign bodies appearing from other environments. Stability is then a matter of what, in my early self-blurb already quoted, I called “formal grip.”

A great fault I have occasionally committed is to make some element too important, so that it appears to be what the work is about—everything else reduced to setting it off. I hope nothing of that sort will be seen in this book.

There are many ways of making a collage. For instance, the famous recipe of Tzara for making a Dada poem by cutting up, and rearranging by chance, the words of a newpaper article. He insists, it will be remembered, that the poem so made “will resemble you,” which I have always taken (I could be wrong) as simple insult: you are yourself random, a jumble.

This is not my way of proceding (though I have, of course, tried it), but I must admit to a trace of Dada back behind many of my reactions. Dada, it will be remembered, was important in the development, both of collage and of abstract art.

I remember suggesting to an obviously talented student that she might try collage. What I didn’t know was that for some reason she had an extreme emotional reaction—very negative—to any form of glue. She did not mention this, but later brought me some lovely con- structions, elaborate paper layers all held together with safety pins.

In my tender years, I fretted because I could neither whistle a tune nor draw a likeness. Though I no longer fret about it, I still can’t do either one. I do believe this simple inability (drawing, not the whistle) was a factor in my starting to do collage.

For an exhibition catalog A Grammar of Collage, edited by François Hugot, I wrote this “Statement on Collage.”

There seem to me to be two quite different directions collage can go, represented in my mind by Max Ernst on the one hand and, on the other, by Kurt Schwitters. Ernst recombines old images, creating chimeric figures and events, and puts his creations into a new space—often a sinister or threatening space, a space congenial to archetypes, with a place for phantom desires and fairytale fears.

In Schwitters’ collages, the debris that he has assembled fills the frame—there is no additional space, no container. So there are few narrative possibilities as opposed to those of Ernst, which run to novel-like sequences. And since there is no situation for the elements to fit into—no story—the elements remain formally suspended, visually in place while in most other ways out of place.

My tendency, generally at least, is in the direction of Schwitters, eliminating space, but I merge the elements in a way he does not. Thus, when working with paper, my elements are usually torn rather than cut. A large proportion of the elements touch one or another edge, suggesting incompletion. There are tissues laid over some areas and in some cases I add paint or pencil—all of which lessen the distinctness of one element from another.

I am not, of course, comparing my work to that of Ernst or Schwitters. Nor has either of them influenced me as much as, for instance, Paul Klee or Julius Bissier. The collage artist I have learned most from is Nelson Howe.

Collage is for me a way to explore, not necessarily the thing I am tearing up, but the the thing I am contriving to build out of torn pieces. To the extent that there is a purpose to what I do, its end is the “enjoyment of a composition”—a concern, as Whitehead notes, common to aesthetics and logic.

Ernst and Schwitters: having early taken the direction of Schwitters, I regard the two of them as masters and equals, and in fact have gradually moved into a position somewhere between (or beside) them. And I would now note my debt to Motherwell’s gauloise wrapper collages. And to the paintings (not collage) of Serge Poliakoff. A Poliakoff painting, as a critic whose name I can’t remember says, “has no depth, no sky, no perspective.”

I have no sky. Sometimes the ground seems tenuous. But composition remains an enjoyment.