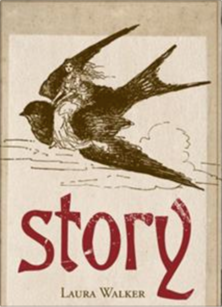 
deer. door. a story ready to spring. she shifts her weight,
cups sliding across shelves, seashells and hollow dolls.
what wreckage we become, waiting. the air shimmers
and for a moment she sees through, empty floor,
something hiding under a bed. a foot for bait.

In story, by poet Laura Walker, an event from a girl child’s past is a visitation and a haunting: half-remembered, half-imagined, conjured from what family members did and did not say, peopled with characters both real and imagined, and rendered ambiguous by a gradual accrual of complexities. These poems might be understood as an investigation or retrieval, with fairytales wending through. The revelatory work of fragment is its primary tool.

This is a book of untitled prose poems in justified blocks. There are no upper case letters, precluding a hierarchy of sentences, and the punctuation itself is often malleable. Yet each prose block culminates in a period as if this particular investigation is over for now, and the poet has taken a breath. As if each time the poet builds anew a structure that cannot stay aloft much longer – a delicate, quaking thing of patterns and echoes.

In story, time and event are provisional (“if she were seven and a man was there, is there”); story itself a character, with shifting versions (“the story continues on its own…she can see it in the distance, in one version calls out, in another doesn’t”); and even sequence is rearrangeable (“one thing happens after another, except when it doesn’t…”).

…where her hand touched his arm the story
of the miniature girl: discovered in an eggcup, beneath a
tooth, inside a walnut shell…

whereas an alternate version might be the self-empowered robber-girl – ironic heroine:

…the robber-girl disturbs the
placid water, boots on wide, her knife a friendly choice.

Elements from Hans Christian Andersen’s “The Tinder Box” are ubiquitous throughout story: a hollow tree, a greedy soldier, one tender (sic) box, three sets of enormous eyes. Readers might remember the appearance of the soldier in Walker’s previous books – follow/haswed (Apogee Press 2012) and rimertown (UC Press 2008) in particular.

One notes that the cover of story, designed by Philip Krayna, features an 1893 reproduction of Hans Christian Andersen’s Stories for the Household where Thumbelina is depicted riding on the wings of her bird.

The prose poems themselves are boxes with partially hidden elements and subject to the intrusions of migratory movement. Fever comes through, soldiers move through, dust storms come through, a story marches past. Excavated memory struggles to construct itself even as it struggles to undo.

A frequent return to shapes – the shape of story or the shape of character – is of particular interest: “she lay on the bed because to leave the bed was beyond the shape of her story” or “to lead yourself back out of the story is to fumble with shape in the dark.” Likewise, there is a recurring attention to gaps, rents and holes: “the soldier looks through a gap in the story” or “to make no stories at all, spaces to fill; to make of stories a porous net” or “there remain not the holes but the size of the holes.” These last two excerpts allude to the passage in Hans Christian Andersen’s “Wild Swans” where the swan brothers, in their human shape, spend all night weaving a net for their sister Eliza so they can bear her away to safety. This interplay of shapes and holes is also reminiscent of the shaping of a poem: The shape of text lends blank space a shape.

There is a great pleasure to be had in following the circuitous movement of these poems. Walker performs a rhythmic, musical sleight of hand – all of her shifting story fragments visible and vanishing at once. In story, poet Laura Walker is simultaneously a master of disguise and a master of revelation.

to approach story, surround it with dolls and
tuberculosis, give it playthings and drinks in the night,
is also to see it recede in half-light. the story cannot be
caught, cajoled, contained. we tell it in pieces falling out
of the back of a truck or broken in branches on the ground.