The notion of a total was the guide for a preliminary account of the unlimited endebtment. Not that is in terms of an objective to arrive at, for the notion was the notion not of something that may ever be arrived at, nor to even be imagined as a thing to be accounted; but rather was the notion of the manner to relate to single figures and between them. The universe was not as such the figure of a total, but a figure to record as but another mere example to give thanks for. It did not equate to 1079 atoms, nor to 100 000 000 000 galaxies, which were figures to record beside the figure of the milky way at such or such a time, from such an angle, which was not to be reduced to such a figure as 400 000 000 000 stars – but set beside it. The account was not arrived at by the means of an addition or subtraction or division of a quantity of figures of that owed, but was a process of arriving at such figures of account to be recorded as unique approximations, without order to adhere to. Thus the sun behind the clouds did not equate to its description on a page of the account book, nor the hand that wrote the figure, nor the single drop of water that had dried and left a mark between the eye that saw the figure and that hand, which did not in turn reduce to the occurrence of the storm, nor to the spectacles through which it was avoided; and neither could that image of the sun have any precedence to anything that came to be beneath it, but was merely one more debt beside the others. The total was impossible to reach, but helped to guide this calculation, in the sense that there was always something else to take account of. However it was still to be determined how the notion of the total corresponded to the notion that there was a debt to start with, and to how it was that figures were related. It was here that came the question of the contract. 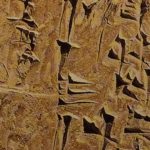 Christopher Clifton lives in Australia. His treatise Of the contract is forthcoming from Punctum Books. These texts are taken from his novel Interpretations of the contract, which will appear through Called Back Books.