from SO MANY OLYMPIC EXERTIONS

WHAT IS A GOAL?

In Spanish speaking countries the soccer goal is called the arco and the goalie an arquero. Soccer was originally played in monastery corridors, where archways marked the goal posts. Eventually wood posts would be erected, and goals would literally be “scored” into the posts. Goal posts can be moved closer or further apart to make it easier or harder to score. “Moving the goalposts” is an idiom for cheating. A hockey goal is 72 inches wide and 48 inches tall. In rugby, the sticks are set 5.6 meters wide, with the crossbar 3 meters from the ground. In fencing, the goal is to score the most “actions” and “touches.” In baseball, the goal is called a run. In cricket also. In archery, the target. In basketball, the basket. In golf, the hole. In wrestling, the superior position. In tennis, the point.

In corporate governance, a goal is an end, an object, an endeavor, a physical object, an abstract object, a purpose, an objective, a number, a mission, an aim, an outcome, an intention.

Goals are relevant only if they manage to establish a proper distance between ability and desire, encouraging intrinsic motivation. Note that a goal is not the same as a want. Most children do not have goal when they start a task.

I walk to Rite-Aid just to buy some things. I feel an economic transaction is just the right sized goal, not too large. I walk up and down the aisles, looking for something to need. Contact solution, lotion, a scented candle, some candy.

The walk there and back takes forty minutes. The problem with goals is that once you accomplish one goal it disappears and reappears somewhere else, further away. And there you go again.

Goalies are sometimes called the “feminine keepers of the gate.” They must repel penetration to maintain the sanctity of the team. They are noticed only when things go wrong.

Moacyr Barbosa was one of the world’s best goalkeepers, but he had the misfortune of being selected as Brazil’s goalkeeper during the 1950 World Cup. Brazil, the home team and largely favored to win, lost to their rival Uruguay. It’s a defeat that still haunts Brazilians today.

After the defeat, Barbosa became a national villain. Many believed he was cursed and forbade him to attend matches at the Maracanã Stadium. On his birthday, Barbosa invited all of his friends over for a barbeque, but when his friends got there, they found him out in the yard burning the goal posts. His famous lament is that in Brazil, the maximum punishment for one’s crimes is 30 years imprisonment, but he has been punished for more than 50 years. Barbosa died of a broken heart. Heart attack.

In Dante’s Purgatory, the punishment for people who seek nothing in life is to spend an eternity chasing after a blank banner. Emile Durkheim writes in Suicide: “All man’s pleasure in acting, moving, and exerting himself implies that his efforts have not been in vain and that by walking he has advanced. However, one does not advance when one walks toward no goal, or—which is the same thing—when the goal is infinity.”
But I suppose that if having no goals is just as painful as having too many, then I should opt for having too many instead of none. The pain, emanating from different sources, will feel synonymous, like the difference between freezing and burning.

She cried into her goggles and alphabetized everything. She had difficulty just holding a glass of water in her hand. She spent a lot of time counting tiles. She took an overdose of aspirin washed down by water from a puddle. Then she swam 94 miles to Montauk on nine bottles of warm beer and three packs of cigarettes. At practice my teammates would be like, “Hey what did you do last night?” I’m thinking, I went from the living room to the office to the bedroom. Suddenly she was an outsider, a different person, shunned, like a leper. Suddenly the notion of autumn was nothing more than brilliantly colored orange trees, just like in the postcards.

The Kenyan runner’s Japanese trainers were concerned about him. News had come in from around town that he was only speaking to people in aphorism.

The tofu delivery man reported that when he tried to strike up a casual conversation about rising gas prices, the runner said: “In the state of nature people are rapacious animals. Nature is not sympathetic to equality.”

The convenience store guy reported that the day before that, after the runner bought his post-run snacks, he’d mentioned, apropos of nothing: “You know what Voltaire says! In the fields it’s the body that suffers—in the city it’s the mind. The ploughman doesn’t have time to be melancholic,” he said.

And in the post office downstairs from his apartment, the runner was overheard to have said to an attractive young woman: “What’s the goal of leapfrog but the pleasure of leap frog?”

The townspeople didn’t know whether this odd manner of speech was a language learning deficiency or a quirk of his personality. They didn’t know him very well. There were dozens of other Kenyan recruits that season.

The runner’s roommates, however, assured detectives that he always spent his nights in. He wrote long letters to his family back home.

In Japan—(he wrote in one such letter) everyone is so small. Have you noticed how in crowded places, people tend to be smaller? Apartments are small and so are the people. You know that saying about a frog in a pond? Here, I feel my extremities are a nuisance: my elbows bump against walls that seem to appear out of nowhere. My room is a stacked confection: a bunked bed above a table and the little stool folded underneath it. There isn’t any room to expand on this island, you see.

Brother, you say you run a 2:06, and you are improving. But you must work harder. Your world won’t be the same as mine. Winning won’t guarantee reward. Did you hear, in the Utrecht Marathon, first place wins 100 euros while Dutch nationals win 10,000. You wonder why Sammy Wanjiru fell out of the building. He had a drinking problem, that one.

The runner folded up the letter and put it in a drawer with all his other unsent letters. His brother was dead. His brother was killed alongside his wife and sons during a break-in. The masked intruders had heard of the prize money that was being sent home from Japan.

Late in the afternoon until late at night, the market in Sendai teems with people. All the runner sees are the tops of black-haired heads, bobbing in rhythm. The runner thinks of the start of his favorite training run—the fartlek—two minutes on, one minute off. The runners push and weave like people funneling into the closing doors of a train. But at the finish he is always the only person running, and there is nothing ahead of him but road.

Will Mike Tyson ever be happy? He believes he will die alone. But he would want it that way, because he’s been a loner all his life—with his secrets and his pain. He’s really lost, but trying to find himself.
Mike Tyson raises pigeons now. He loves these pigeons. They are bred to fly really high and then plummet head-first into the ground. Sometimes they don’t pull up in time. 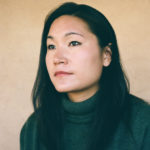 Anelise Chen is the author of So Many Olympic Exertions (Kaya Press, June 2017), an experimental novel that blends elements of sportswriting, memoir, and self help. She received her BA in English from UC Berkeley and her MFA in Fiction from NYU. Her essays and reviews have appeared in the Paris Review, New York Times, NPR, BOMB Magazine, New Republic, VICE, Village Voice and many other publications. She teaches writing at Columbia University.