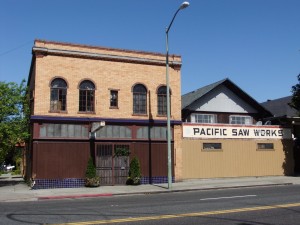 With whom do you toy? inquires the first subtitle of Brandon Downing’s video, “Fu Xin De Ren” (2009), a “mix of scenes from Mario Bava’s ‘Baron Blood’ (1971), recut and remixed with the 1967 Taiwanese lounge hit, ‘Jilted-Heart Lover’; G.C. Sippy’s ‘Bawarchi’ (1969), and ‘Thundarr the Barbarian,’” the lyrics of which have been homophonically translated by Downing to create a juxtaposed world that breeds an original paradigm of meaning. (Downing’s Youtube channel)

With fire flying up in front of her already-red robes, “Fu Xin De Ren’s” leading actress teeters on the edge of absurdity and sense (‘sense’ as in experience rather than a logic we can make). I need a shower, she ululates from the artist’s captions, and a handful of us started laughing like kids in a classroom who can’t handle the material.

So began the speCt! presents reading on January 31: a series of mishearings and spontaneous combustion.

The reading, which featured film and poetry from Downing as well as poetry by Elaine Kahn and Ben Mirov, was a true occasion of mixed-media and an inviting environment for mingling with fellow writers and artists. The event was held in the apartment above the speCt! books studio where the speCt! team (Peter Burghardt, Gillian Olivia Blythe Hamel and Robert Andrew Perez) carefully produce chapbooks on an antique letterpress that is flown over on occasion by arrows when the space is doubled as an archery range. This DIY spirit imprinted the night with a rebellious optimism: the vibe was hip, hitting the right places, and we felt it.

Brandon Downing was the first to read, transitioning the audience out of his videos and into a night of verse. Downing’s poetry echoes his experiments with film in its use of juxtaposition as the driving force for generation. The poem “Jewish Dallas,” for instance, blends references and cultural levels in a similar way to the homophonic captions in the videos that kicked off the night; his art challenges its source visuals by locating meaning in misunderstanding rather than in understanding. Through his unique, collage-driven aesthetic, Downing reminds us that art and life are composed of play—that we toy with the world and it toys with us.

Next up on the mic was Elaine Kahn, her first words pronouncing gratitude for the pop-up bar: “I didn’t think these drinks were strong but they are,” she professed while raising her glass. This caused me to look over at the curators through my own, loopy vision, with an acknowledging nod of silliness. Then Kahn’s lyric entered my consciousness, declaring things like, “hope springs interest fragile as a macaroni brain,” and “the hamburger of the brain,” and “all our similarities are boring,” and I was suddenly lucid again, my attention flaming like “the orange of the floor of the brain” (from “9.7”).

Elaine Kahn’s work is sharp. It’s cuttingly funny & cunningly quick. There’s an aggression in her verse that allows a listener to overhear the sounds having it out with each other. It’s as if the poet and her diction are boxing in the ring of the struggle between personal memory and public music. During her reading, Kahn came to the realization that she uses the word “plastic” frequently in her poems. This discovery illuminated the coherence of the night’s line-up: Downing, Kahn and Mirov’s work all share a malleable aspect that emphasizes the nature of art as artifice and which also questions what art will become as society gradually succeeds at flipping the model and turning nature (reality) into artifice.

These are the thoughts I was having as Ben Mirov stood to read “The View From My Cube Looks Out on Endless Static,” a pantoum-sestina-like creature whose repetitious structure makes a series of haunting images that (for me) included the 9-cubed set from Hollywood Squares, a man in a business suit puking static onto a curb next to his office, and money flying out of wounds like swarms of flies. This piece, which I found truly entrancing and frighteningly applicable to the current plight of writers, very nicely displays Mirov’s craftwork and imagination, which contain that rare and precise Orwellian strand of the apocalyptic we all crave.

“I suggest you find a way to push your money through your mouth,” is just one line I hung onto. If you have the chance to see Ben read in the future, I suggest you a) go to the reading and b) request that he read this poem so that you can leave with your own pieces of language to cling to in moments when you’re feeling alone in your paranoia. Mirov’s poetry strikes a tonal register that seems to speak from beyond our daily ledgers of consumption, within a thought-space that acknowledges the paradoxical intelligence contained in our self-destruction. In fact, many of his poems both literalize and comment upon the machine. They are—through the use of repetition and other devices—distinctive, programmed systems that are built not to autocorrect but to consider and self-criticize.

In a world of art that can many times push us toward similitude and symmetry, Downing, Kahn and Mirov stand out as artists concerned primarily with liberation. That the speCt! team chose readers who are able to harness community through the power of the independent spirit speaks to the mission of the press as well as to the essence of the East Bay scene.


Check out the next speCt! presents: Sunday, May 4 at 7:30 p.m. with Daniel Tiffany, Kevin Killian, and Catherine Meng.

The climax of the warning is pure Tort.
So I mustn’t.
See her warmly resisting the sea claim?
She’s no weight now, no weight when dead,
Just like you’ll cry when the twin phantom becomes
independent from you.
Caught without its chest-plate on,
The moody thing then breaks right into a Nordstrom’s.
The moment you’ve fulfilled the warrant
By speaking at our conference, well,
You can finish your evening pulling cords
Out of your keester, totally bog-eyed, if that’s you.

Before you do that though, let me tell you what it’s like.
Late in life, it’ll be the doctors in doctor light,
The continents having melted down into one little islet. You.
You’re on the most mysterious game show you ever seen.

Gliding through warm feet-of-water, and onto the set,
Little cakes that look like charcoal, figures that make you wake bad,
Are everyplace. Everyone’s spying and poisoning,
Suddenly your entire girlhood is rocketing back past.

Got born in a turf house and died in a timber one, here on,
Surrounded by massive trees could’ve been in Tron. And
That’s just one man! But when you marry Lucifer, hey, you’re married, right?
Such fiery perfumed violet turmoil breezes.

All our  similarities  are  boring.  We are not
reborn, we  are  reborn  in situ.  Born with
perfume, born with a timorous kiss pumped
tight  on  both  our  souls  are dented dents
reflecting   Andalusian    depressive poise.
When it is done. When who is there. When
cross I  cross  the  umber  grain  save open
loops of chain my love attends the good &
bitter every night our changes  twist+lasso
long +cord approximation   1+cord+vibrate
1+1+series of the crowd 2 horrors of our du
toilette is bored when who is there is done
& done I cross & stink.

from The View From My Cube Looks Out on Endless Static