Writing is non-verbal. It isn’t about words. It’s about sculpting energy.

But comes to have a cohesive structure—the structure of human vulnerability, human spirit.

The goal is to expose an organism coming to life. 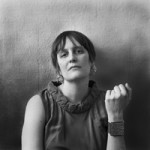 Andrea Baker is the author of Each Thing Unblurred is Broken (Omnidawn, 2015), Famous Rapes, a paper and packing tape constructed not-quite-graphic-novel about the depiction of sexual assault from Mesopotamia to the present day (forthcoming, Water Street Press), and Like Wind Loves a Window (Slope Editions, 2005). Her recent work has appeared in Denver Quarterly, Fence, Pleiades, The Rumpus, Tin House, and Typo. It has also been anthologized in Family Resemblance: An Anthology of Eight Hybrid Literary Genres (Rose Metal Press, 2015), Verse Daily, and Broken Land: Poems of Brooklyn (New York University Press, 2007). In addition to her work on the page, she is a subject in the documentary, A Rubberband is an Unlikely Instrument. She works as an appraiser of arts and antiques in New York City.