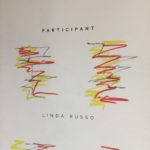 Winner of the 2014 Besmilr Brigham Women Writers Award, Linda Russo’s latest full-length collection Participant (Lost Roads Press, 2016) led me on a search for the origins of words, specifically the words participant and inhabit whose sources and meanings so smartly inform the life of this work. Participant is related to words meaning to share or share in. To partake. Part-taking. It bears an affinity with the word capable when to be capable means to be receptive, able to grasp or hold, from the Latin capax, roomy, wide, able to hold much. Such is the moment of perception and experience in Russo’s long poem “Participant.” The moment is capable, able of holding much.

Inhabit comes from words meaning to dwell in or reside and is related to the Latin habere: to have, to hold, to possess, to find oneself or be situated. We dwell and are situated both in a locality and in the moment. In space and in time. The intersection of perception and the material world is, in a sense, what locates us, is our locus of habitation. Interestingly, the origin of habere resides in the PIE word ghabh: to give, to receive and to hold. Perhaps in the places that hold us, by which we are held, an exchange occurs. We give our attention and in turn are given happenings to attend to, threads to untangle and follow. In this poem describing a Thoreau-like walk, or series of walks, through the speaker’s neighborhood, our speaker manages both to inhabit the ephemeral and to release it, letting it remake itself into what just as fleetingly comes next. I’ve made it sound simple while poem itself is anything but.

In her previous collection Meaning to Go to the Origin in Some Way (Shearsman Books, 2015), we find these lines: “whereas, a sort of smallness is/whereas, the tentacles of my circumference/whereas, a kind of attending to/…/whereas heart + beat=” (p.10). Spatial awareness is a way of experiencing the geography of the moment. The body aware of itself in space and time is a way of knowing where one is, mapping one’s dailiness. But whereas the poems in Meaning to Go to the Origin in Some Way explore the layered meanings of the geographical, the two long poems in Participant seek to participate in the world they evoke, to enact more explicitly what Russo calls “inhabitory poetics,” described as “an approach to writing within (and out of) senses of being one who inhabits, one who is ‘place-based,’ where place is conceived as a site of interspecies inhabitance and a ‘field of perpetual conflict.’”i

Participant is divided into two sections. The first is the long poem “Participant,” composed of sentences and fragments arranged in singlets, couplets, tercets and quatrains that move across the page like weather. The effect is both breathless and slow, dynamic and static. One image or thought gives way to the next like the moments that make up a day, a day spent walking. Like the neighborhood in which the poem takes place, the white space receives this movement and contains it—though not entirely, as images and thoughts lift off the page into our consciousness. Through form, the poem enacts the spatial and temporal nature of the momentary, the “zones of entanglement” in which moment by moment we find ourselves.ii

The poem opens with a paradox: “the streets are paralyzed//kind of Euclidean//I’m not saying it happens but I’m existing with it/as it happens” (p. 7). It might be rush hour, traffic halted. But seen as energies, the streets are locked in place, cannot move, as the speaker can, as the insects and birds. Though intended to facilitate movement, the streets are stuck-in-place. Our speaker is emphatic about not saying, not fixing the moment, not making a street of it. Rather, she’s noticing and living into what’s occurring as she notices it. What does it mean to exist with? To be present to, to live alongside of, to breathe with other breathing beings and events.

Hyper-aware of complexity, our speaker admits her—and our—very human bind: “I’m afraid of my overempowerment/unleashing realizations in the leaves/stabbing points on a powerful map” (p. 7). We can’t help interpreting our world, can’t help saying and tend to confuse our ability to speak with our tendency to speak for—in particular for the non-human world. While the speaker recognizes the problematic nature of saying, she does in fact say—and this voice is so compelling, we wouldn’t want it any other way:

Maybe the world needs our saying, which is after all a kind of participation. We notice, we’re aware, we construe and utter our awareness. The poem invites us to lace up our walking boots and go wide-eyed and wide-eared along with the speaker into the surrounding world. Our going enlivens the streets.

As sites of participation, words are able of holding much. With this in mind, one of this poet’s methods is to repeat significant words. Distance is one such word, extending an examination begun in Meaning to Go to the Origin in Some Way. In that book we read: “how many distances do animals have?/flight distance, critical distance, personal distance…/together in our unconscious geographies/I’m nobody you know//but now distance binds us” (p. 11). To be bound by distance to the unknown other is a more than intriguing idea, isn’t it? It’s one Russo continues to mull in “Participant” where the speaker counts “very real distance/on fingers like a school girl,” making the abstract concrete, embodied (p.11). Next:

morning never poses a risk
to my space requirements
it’s like a private wood
in which I comprehend
public distance (p.11)

The large and fundamentally incomprehensible fact of morning becomes intimate, “a private wood.” This shift of scale allows the speaker to move to a consideration of social geographies and human movement, how air travel shrinks one kind of distance, how another kind of distance, an event across town, comes near through the crowd’s “cheer on the breeze” (p.12). I think of this as “compost-poetry,” turning a word over and over, letting it rub against various words and image-complexes in order to grow its meaning, letting it extend in fresh and unpredictable directions. Different kinds of presences inhabit what we think of as distance. The poem suggests that dwelling in-place may facilitate an obliteration of “distance,” may in fact bring everything closer.

Birds frequent the neighborhood of these pages, crossing boundaries, breeching distances. Our speaker becomes “reacquainted with chickadee warmth//at this distance//always pleasant there//in line breaks of air” (p.13). Of course there are chickadees, those omnipresent and congenial neighbors whose habitations are likened to the habitations of poetry. In a broader sense, birds like poets, or poets like birds, are boundary-crossers, moving seamlessly between realms of earth and air, or of observation and saying. The speaker’s attentiveness to their comings and goings, their chatter and nest-building, is an acknowledgement of their equal agency here. They inhabit and partake of the speaker’s spatial and imaginative geographies.

Because this poem’s construction is so smart, the speaker comments with a wink at her own method and metaphor: “maybe the birds are a clunky metaphor because the desire is so ridiculous” (p.37). She’s willing to laugh at herself, chide herself for her naïve desire for communion, her earnest wish “to read the whole world” (p.37). Our speaker is a post-modern Romantic with a penchant for quirky turns-of-phrase that swerve delightfully into 21st century colloquialism:

it’s a skill they teach
in furious pulsing greens
not to fuck with your nests too much (p.41)

This voice invokes Emily Dickinson: “green people collecting green things, or territories//which are you?” (p.9) The question has a dashed-off yet urgent quality. Russo is eager to make this not a party of one, by one, for one, but an inclusive discovery of belonging here and belonging with. The knowledge she calls upon is communal, for most of us live in neighborhoods where the chatter of robins and chickadees and the tiny honking of the “very small very small nuthatch” mingle with sounds of traffic, children playing and the passing of jets overhead: “it’s all blurry conjunction//a diet of traffic//and too many sinking questions” (p.47). The existential questions are communal, too. In this era of climate change, resource depletion and the sixth great extinction—“we’re fucked when the sound syllables fade”—this poem is concerned with how humans are to dwell. With what awareness, what sense of participation with other species, are we to inhabit our geographies, our knowledges, our locations, our imaginations? Things are simultaneously paralyzed and in motion, moving into and out of our sight-lines, our hearing.

The book’s second section, “Leaflets,” consists of six linked poems. Each is long and skinny with lines that often break mid-word. The effect is stuttery, like birds flitting among leaves. The poems take off where “Participant” ends, “and I’m just finding out//how leaves make a place that listens,” (p. 49) and seek to enact that listening. The line breaks suggest how sound comes to us in pieces that make sense only when gathered together:

A leaflet is a written artifact, a page or pages, concerned with conveying information about an event or a message of political import. The “event” these poems advertise is attentiveness, is listening—and by-so-doing, activating our presence in the moment, in our precise location which is the only place we can actually be. These poems feel elegiac, seeking to capture, if lightly, if tentatively, the cadences of another’s voice, the “she” to whom they refer.

Leaflets are also individual leaf-like structures that together make up a compound leaf, the leaf-like structures themselves—or poems that assume the postures of leaves in a “green tidy breeze” (p. 55). Words and phrases occur and recur: I can’t tell you; feel it; unnumbered; so small; vanishing, unrecorded, saved; hidden away; another problem. This is compost-poetry in concentrated form. I imagine our speaker out walking again, observing the world of birds and leaves as she thinks about loss, maybe a specific loss, maybe the loss of the world-as-we’ve-known-it, maybe both:

“I can’t tell you,”
“feel it,” the “man-
y will rise/hidden
away” from your
“forbidden” ear
the “vanishing, unr-
ecorded, saved”—
“like between then
& now” like betwe-
en her papers
feel her pulse &
intelligence quiet-
ly there (p. 54)

Though death is invoked and remembered, the problem is “not death by any/stretch but ‘passi-/ng at the place’/remaining ‘unnu-/mbered sav-/ing this place ‘is/the going’ ” (p. 55). If, as Russo has written elsewhere, “poetic form embodies an encounter with the world at hand,” these leaflets embody shiftiness, breeziness, but also brokenness.iii The communications we receive from the world at hand are difficult if not impossible to decipher, yet the urgency of these poems, the intensity of their listening and considering, asks something of us. Traffic, drones, dying bees, “collateral damage,” “a punctured nook,” all these suggest that rather than providing a safe haven, by its very fragility and susceptibility to human transgression, the “natural world” we find in our neighborhoods, our localities, the speaking of leaves and birds, might best serve to disturb our tranquility and complacency. Might in fact bring us to an awareness of what’s passing so that we do not neglect to bear witness, to listen to the voices and gestures of the places we inhabit not to pin them down but to exist alongside them, shakily, with trepidation and boldness both: “thrilling and daring as uncertain/as a potential or future//participant” (p. 39).