SOMETIMES A HORSE IS NOT A HORSE

The Marais—where we are—but in
another era, before chic.
And in the weed-choked square, a crowd
near a creature, legs loping
in air while his grounded body writhes.
Pressing forward, we
hear the orgasmic wheeze of his panic.

We scramble. He scumbles, and we
cling to his back—horse with two
eyes on one side of his head, reeking
of linseed oil, his canvas flanks heaving.
Noir fantasy? Rescue? Ours?
His? Blank-minded and without bit
or reins, we lope on.

We are fleeing on a mirage of a mirage
escaped from the musée.
All the creatures have fled—cat, goat,
dogs, a circus pursues us,
as does snow and lowering night.
Cut-eyed, the horse strains
forward amid yowls, bleats, barks.

I—yes—I’ve left my several selves, am
paired now only with him,
I promised, he says, promised we’d run.
Slow smile of a dream, my thighs
gripping the myth. No
bridle, yet he and I are the we
in this fierce, fatal, fast-moving frame.

There’s a line in a John Guare play, where a character says, “I’m not myself, but whoever it is I’ve become, I can’t seem to control that person either either.” This is how I am when dealing with dreams and the surreal. Challenged to write a poem about a horse, having never written a poem about a horse, somehow the gist of this poem had to do with hearing that the Picasso Museum in Paris is closed for a 4 year renovation. Then, somehow, a horse from Guernica galloped into a dream and became a kind of stud-steed, joined by all the Picasso animals from that museum; and I tumbled back to when I first saw the square in the Marais 35 years ago, when it was still weedy and unloved. The French lines in the poem sound and are meant to sound like lines from a child’s picture book. You will note, in the accompanying picture, I am on a child’s playground riding a sheep, rather than a horse. 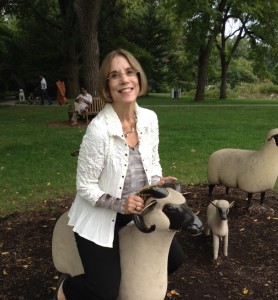 Susan Terris’ poetry books include THE HOMELESSNESS OF SELF, CONTRARIWISE, NATURAL DEFENSES, and FIRE IS FAVORABLE TO THE DREAMER. Her work has appeared in many publications, including: The Iowa Review, FIELD, The Southern Review, and Ploughshares. She is editor of Spillway Magazine and a poetry editor for Pedestal Magazine and In Posse Review. She had a poem from FIELD published in PUSHCART PRIZE XXXI. She is the author of 5 full-length books of poetry, 14 chapbooks, and three artists’ books. In 2013 Marsh Hawk Press published her new book—THE GHOST OF YESTERDAY: NEW & SELECTED POEMS.