Unbutton. You are born.

I know nothing. Thrum. Detach. Situations implode, demand. My former. What is do you need. Require. Want. As if by cupped hands. Inquisition. Foundation set, re-set. Small, perfect birds. Of empty houses. Ricochet. Is schooled. Is held at arm’s length. Is captured, film. Running down the slope. Imprinted. Patterned. You, are not. Reflective. Listen. It follows I have seen.


Can we. Never. Didn’t. Would they, grieve. Or something personal. Name, aloud. Could stay. Vigil, deep upon the waters. Sculpted. Ferry me, including. Geometric. Threats of genealogy. Tundra, wasteland, sun. Apocryphal. These hands, detach. A future, freshly circumcised. Held together by a sentence. This force of will.


Metaphor. What have you. Birth.


Mmm. Stalls, tongue. Other. Say the word, the name. Unpossible. Vocal chords would buckle. All the bodily things. Silhouette, and sunken cheeks. Embellish. Wonder at her features, facts. As catch-can. Standard I-beams, microscopic bells ring. Pause, and. Who are you?


For information. This is a request.


Field guide. Deport. Speaks, migration. I am not the expert. Windows. Eyes are passing, shut. Depart. A state within, compression. The view from, here, here. Flesh made out of sunlight, habit. Created, happened, fabricated. If my body would occur. Distant lands: some fifty clicks.


Modest, well-made. Wasn’t literary. Question: to jettison or generate new cells. Bred, in bone. Considerable attention. A cloud of black and white. Struck the body down. How did I begin? Inherit, the wind. A gesture, skin tone. Hair. Sins of the father, singular. I am not the act.


Once more, into the breach.


Air and water, air and water. Thread the needle. Say hello, hello. Birthdays pass. They stack. Accumulate: Mother’s Day. Autumn months. Patience, boiled to a point. Harmonize, a clinical word. Separated, plunged. The narrative is in the absence, surrounding as a shape. Begun: by parts of speech, by way of hands.


Would wish to. Want. Imprinted features, face. A nasal tone. What gestures. All our in-betweens, our intersections. Haze, unmade. But also, also. Procrastination, vision, insight. Glacial. Tensions stored, and weathered. See you. You. Why can’t I.


A line a series of lines a fragment lyric incline a ripen sequence tumbled out of you.


We. Are turning a boundary.


Shush. Shush. Be quiet. Shush. Restrain. Restraint. Abate. Or don’t. Could never. Can’t. I couldn’t. Please. I beg you. Silence, or.


Begat, begat. This is a copy of a document held by the Office of the Registrar General. Begat, begat. Ceaselessly exposed, and hollow. Cyclical, ends. This grown head strikes a ceiling.


Until a separation, there can be no relation. Is this true?


Parthenogenesis. Maternal instinct, strikes. If you the only one. Trade for passage, ours. Delighted. Like it was the day before the day before. Slips through the fingers.

Since first initiating contact with my birth mother in May, 2014, I’ve had an awful lot of new information to absorb. I’ve been fortunate enough to have had multiple conversations with the Toronto poet Mark Goldstein, who provided some of his own insight into reconnecting, as well as being an essential sounding-board. It was Mark who originally prompted me to attempt to write some of this out, suggesting that he would be very interested to see how it might emerge through poetry.

He, himself, had written out elements of his own experience with adoption, and reconnecting with his birth mother, through his Form of Forms (Toronto ON: BookThug, 2012).

It’s certainly something I’d thought of, but hadn’t been sure how to begin. I’d toyed with exploring such through non-fiction, and I’ve sketched out a series of notes, but it’s nowhere near seeing itself into anything that might be called writing. This is, I suppose, the beginning of a conversation. 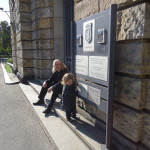 Born in Ottawa, Canada’s glorious capital city, rob mclennan currently lives in Ottawa. The author of nearly thirty trade books of poetry, fiction and non-fiction, he won the John Newlove Poetry Award in 2010, the Council for the Arts in Ottawa Mid-Career Award in 2014, and was longlisted for the CBC Poetry Prize in 2012. His most recent titles include notes and dispatches: essays (Insomniac press, 2014), The Uncertainty Principle: stories, (Chaudiere Books, 2014) and the poetry collection If suppose we are a fragment (BuschekBooks, 2014). An editor and publisher, he runs above/ground press, Chaudiere Books, The Garneau Review, seventeen seconds: a journal of poetry and poetics, Touch the Donkey and the Ottawa poetry pdf annual ottawater. He spent the 2007-8 academic year in Edmonton as writer-in-residence at the University of Alberta, and regularly posts reviews, essays, interviews and other notices at robmclennan.blogspot.com.