but what can wake you from the dream of existence?

moon hung like a blade above the white neck
of fog on Mt. Tam

A spotted fawn,
a kettle pond dusk or dawn;
light slant and thick

on unmowed lawn,
dust & pollen in heaps of coin.
Born again each week,

the trick of speaking-
in-tongues. A conch horn,
a caul. A wall of brick

pinked by sun.
A sharp-waisted wasp, a tern
gone still on a mud slick.

was not the woman we knew    would
this never    could how like that do
someone    her    whom we all knew.
cleared hurdles    paced blind racers
flayed subcutaneous    raked napalm
wet wool baffle    lies     lies     lies
Full fathom five     refuter of inculcated truth
Daughter / sister / mother / giver / giver / giver
that etcetera matters at least as much
all will die in open apostasy
O sprinter    O cloud treader    O eater
of fire and fog    loved unabashedly &
unabashedly left    found at the bridge
the car    one running shoe    cue dirge


“But what can wake you from the dream of existence”: The idea of life as a dreamed reality is an old one but I was interested here in the occasional, unexpected moments of pure consciousness that disrupt our somnambulance. The poem is a series of moments captured in images, each a point of rupture—terror or rapture—along the continuum of the humdrum tedium of every-day non-perception.

I like upending expectations, but to do that, one must start with the expected, the convention. For example, rather than discarding clichés wholesale, I like to use them but in a way that renews the impulse that originally birthed the cliché and gave it its power. The moon has become a hackneyed image, a common trope. And writers are still in love with it, so I am always seeking ways (like Larkin’s “lozenge of love” or Laux’s “ax / stuck between the branches”) to make the moon surprising again.

Looking back through my notes I see that the poem was originally conceived a sonnet in four tercets with a final, rhyming couplet. The words in this version are not so different, but their shape has changed radically—14 lines reduced to 8, couplets rather than tercets, abandonment of punctuation and capitalization. I didn’t set about consciously to dismantle the sonnet structure, but during revisions the poem began to resist being bound up. I like form best when it broken like this, in such a way that the original ordering impulse is still apprehensible.

“Biography”: Fascinated by the sounds Jean Valentine’s poem “To My Soul” in

Door in the Mountain, I tried to emulate (in a much simplified meter) some aspects of its form: four three-line stanzas with an aab rhyme scheme. Most of the images are from my childhood landscape in western Pennsylvania, walls of brick pinked by sun being ubiquitous in that place of abandoned factories, railroad repair yards, and mills. But the conch horn and tern are things you would never find in those landlocked mountains. So in this way the poem is a biography marking my life’s journey from where I grew up to where I live now, in northern California. The transitional moment is the call or summons issued by the conch. I wanted the “caul” as its own kind of “call” as well as a symbol of being marked from birth, invoking pagan superstition in counterpoint to the speaking-in-tongues. Which members of my family did and do. The poem ends with another coastal image—a seabird (tern)–gone still in a mute version of what I imagine speaking-in-tongues to be. A moment of transfix when, as in the preceding poem, the dream of perceived reality is pierced and we, dreaming, wake to something else.

“Eulogy”: Some time ago three suburban housewives from Marin committed suicide, all within the span of about a year. One used jogging weights to drown herself in a pristine alpine lake, one overdosed on pills and booze in a creek behind her house, and one—the woman I knew—jumped from the Golden Gate Bridge. This is one of many elegies and eulogies I tried to write in response to events which no one foresaw or understood and now do not discuss. The poem retains the nominal shape of a sonnet, 14 lines that, as Annie Finch would say, could fit the palm of your hand. But within that tidy box the poem is coming apart in various ways. 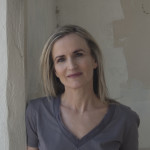 Rebecca Foust’s books include All That Gorgeous Pitiless Song, awarded the Many Mountains Moving Book Prize and God, Seed, awarded the 2010 Foreword Book of the Year Award. Foust received an MFA from Warren Wilson in 2010 and is the recent recipient of fellowships from The Frost Place and the MacDowell Colony. New poems are in current or forthcoming issues of Hudson Review, Massachusetts Review, Mid-American Review, North American Review, Sewanee Review, and other journals.