I hate these poems & you’ve been dead for so long now. I barely have any memories left of you.

Where [thirty yards from the horses] we slept // amongst

Air with its fake gold dust.

But I can barely remember your voice // your face.

My father worked too many hours. He’d come home with his

[His blond locks] How the sun would comb crowns into his hair.

Rory was my first love, before he killed himself.

My father hated faggots. The way my cock looked beneath a

dress. The mismatch of his chafed knuckles and my cut cuticles.

A scrambling of hands. I was always running. Mascara. Massacre.

My momma would wash the red paint off my nails and face.

She’d hold me like the frame of a house. No, the bars of a prison

wall. My bruises dark as holes, he punched into the wall. His

hand was the hammer. I was the nail. & I want to talk about Rory


That night, after my father smashed the television glass with his

baseball bat, I met Rory at the park. We made a pipe out of a

plastic bottle and aluminum foil. [He watched me undress & run

through ticking sprinklers]. I fell beside him then; beneath the

maple tree. & he saw my goose bumps from the cold. & he felt

my bruises, as they became a part of him.


Rory, I want to say that death is what you’ve always wanted. But

that can’t be the Truth. [This time] we can blame it on me. I’ll be

the packing mule, carry all the burden. & you, you can be a child

Nobody has to know about us, not my father nor yours-

No, not even God.

But also a philosophical one—


Often defined by a feeling of security.


Here, it’s possible to [own] property


Here, it’s possible to be sleeping on a park bench

& know you are home.


The last time I ran away


There was this police officer hassling


By the Powell Street Station.


The officer was telling her to move

“Where? I have nowhere else to go!”

& the officer was telling her to


But what he meant to say is


“You are too poor & brown to be in this neighborhood.”


[When will we stop defining people


[This is about the criminalization of poverty].

I HAVE LIVED HERE FOR OVER TWENTY YEARS. I WILL NOT MOVE!!!”

[As the police walked towards her].

[As the police went to grab her].

[As she continued yelling].


“I HAVE AIDS, I HAVE NO MONEY, I HAVE NOTHING LEFT. WHAT DO YOU WANT


& the manner by which

Is [often] describe is


I’ve heard some of my closest comrades

Speak of the “homeless” population


[In grand generalizations] such as

On drugs or alcohol.”

As if “homelessness” were a singular portrait


As if I had never been homeless.

[As if I were not sitting // directly beside them].

To imagine these comrades

& assertions about any other

“I don’t care if black people spend government money or drugs on alcohol.”

“I don’t care if native people spend government money or drugs on alcohol.”

There is a book

I want to write

There is a zine

I want to write

Are alter-egos I created after


Let’s talk about the ownership of

Land as a colonial construct

& how the police state was created

& how to decentralize happiness //

[How we can still create lives of contentedness & meaning].

Let’s talk about the night Rory crashed his car

Into the center divider of the 405 Freeway.

[We were so high]


When Rory crashed his car

[Into granulates of glass].

Along the concrete floor.


& TRAFFIC STOPPED FOR US.


We walked across // the paisley freeway


We called our fathers


For a ride home.


Rory went to his address


Didn’t talk on the drive back.


[The space between us was a walrus


Was a million pomegranate seeds

Rory [later] told me about the argument that

He had with his father.


We used to sneak out & sleep in the backseat

Of that car // every night that

[So almost every night]


Which became my “home.”

& when his car hit the center divider


I never considered myself to be

that kind of “homeless”

With the rotting hands].


[When] my father would

& I had to leave his house.

& I could no longer stay with Rory.

& I was too afraid to call other friends // or family members.


When the church was closed.

& the park was being patrolled.

& I got tired of just walking around.

& I would hum songs to myself.

[The love songs of extinct birds].

& those days // I could never create ART.


Trying NOT to tell you—


[I have been that kind of “homeless” before].


When the moon was

Imprisoned by its sky.


I used to sleep in the prairies

Behind the fire station.

There was this old abandoned oak

Tree, with a tire swing.

& I made walls out of

From its branches]. & I stole

The nearby housing tracks.

Then I dug & I flattened

& I swept the dirt floor

Where I laid my sleeping bag

[On top of the cardboard tiles].


There are twenty poems I want to write for you—

About dumpster diving for food.


[All the boys I kissed for a bed to sleep].

All the boys I wanted to be with 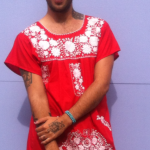 Christopher Soto (aka Loma) is a queer latin@ punk poet & prison abolitionist. Their first chapbook Sad Girl Poems is forthcoming from Sibling Rivalry Press. They cofounded The Undocupoets Campaign with Javier Zamora & Marcelo Hernandez Castillo in 2015. They’ve interned at the Poetry Society of America & received an MFA in poetry from NYU. They edit Nepantla: A Journal Dedicated to Queer Poets of Color with the Lambda Literary Foundation. Originally from the Los Angeles area, they now live in Oakland.