The frog kite flips over
itself
makes a loop
of itself


Laughter thought her
out
Winter over
clothes put by
in the cedar trunk
First phallus popped up:  asparagus
in the land of the rabbits
or is the body a plant
with nerves that are fern

I guessed at the German:  die Farben sind dunkel
The father sings dumbly   (The colors are dark)

feather-father
the bones earth or trees


“Something interwoven, embroidered, literally applied to the figures ‘overwrought’ or
‘written over’ . . . ”

The poems here, and all of “24 Pages,” began during the out-of-kilter extreme warmth of March 2012, during which our few thousand fruit trees budded, then blossomed 2-3 months early, resulting in the death of most of the year’s fruit once the inevitable late frost came. The writing continued through that summer’s unprecedented heatwave and drought. Drought-losses merged I think with the death of my father, a woodworker, in July 2010. Once written, “24 Pages” was typed on a manual Montgomery Ward Escort 500. Although I had not been able to work for some time, the typewriter, and weirdly the fatal weather, allowed me back in. 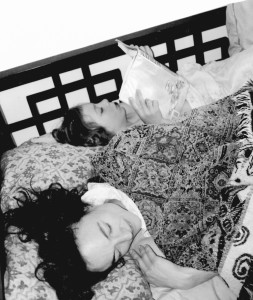 At the time of this biographical note’s composition—winter solstice, 2012—there is a blizzard in Madison, Wisconsin, where Lisa Fishman is snowbound. She (I) wrote F L O W E R – C A R T and Current (Ahsahta and Parlor Press, respectively, 2011), and three other books including The Happiness Experiment. New work appears in recent issues of Volt, jubilat, Cannot Exist, they will sew the blue sail, and in friends’ mailboxes. She still lives in Orfordville.

← Poetry: Brian Mornar
Two Films by Forrest Gander: “Paleoacoustics” and “The Hugeness of that which is Missing” →