through the scrim, the seem-stain of its edging.
It is a field of gray-brown, a soft diffusing:
iris-rain. The bodies somber and phantom.

Some leg says, “Pulse and pause, arch, flex,
contract. This is kind of a step, kind of
sideways flying. This likes defying

space and what defines it.” This like
defiance is a violence, primed set.
Thus like silence is a mime, a blind

beating at the border of variation.
Some hand says, “Come to the circle
of my grasp, soft task, dim slip

in my imprecision. I gaze, I grip,
I pulse my fingers into scroll.”
Turn to the turbulence of from –

core, medium, torso in its anchor,
its beyond. Torn air — accepts,
expels its entry, portal, key.

Then trails its shape, boreal, ghostly.
Part, turn. Deflection in a space, a twist:
the beat’s swarm, the multiplying determine. 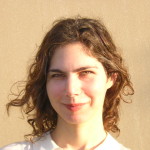 Karen Volkman’s new book, Whereso, is forthcoming from BOA Editions in 2016. Her previous books include Crash’s Law, Spar, andNomina, and a chapbook, One might. Her work has appeared in numerous anthologies, including American Poets in the 21st Century: The New Poetics, The Pushcart Prize Anthology, and The Norton Introduction to Poetry. Recipient of awards from the National Endowment for the Arts, the Academy of American Poets, and the Bogliasco Foundation, she teaches in the creative writing program at the University of Montana in Missoula.