as a child back in ohio
they gambled for my toys
they loaded up a pick up truck
with my relatives and tore
off for another part of america
leaving me behind
in a county home in L.A.
for the orphaned & the blind

i met railroad poets, potentates
rock royalty, potential mates
posers & composers & fate
decreed i orchestrate
experience through templates
executives could tolerate
if it came in underbudget
& within the bounds of taste


This poem is a miniature biography of San Francisco Renaissance poet and filmmaker Richard O. Moore, whose first book, Writing the Silences, appeared in 2010 from the University of California and whose second book, Particulars of Place, will appear from Omnidawn in 2015. Why it took the form of a Bob Dylan song, I can’t say; it just came to me that way. The melody is somewhere between “Shelter from the Storm” and “You’re Gonna Make Me Lonesome When You Go.” 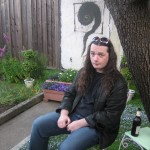 Garrett Caples is the author of two full-length collections, The Garrett Caples Reader (Black Square, 1999) and Complications (Meritage, 2007). A book of essays, Retrievals, has just appeared from Wave Books, which also published his pamphlet, Quintessence of the Minor (2010). A contributing writer to the San Francisco Bay Guardian, he is the poetry editor at City Lights Books and curator of the Spotlight Poetry Series. With Nancy Joyce Peters and Andrew Joron, he also edited The Collected Poems of Philip Lamantia (UC Press, 2013).