This month we feature new work from the five finalists of Omnidawn’s 2017 1st/2nd Book Contest:

Here are your human bodies.

The exhibition          is the memory.
Content is a constellation of forces.

I don’t think the world owes anyone anything. Tendencies go
in opposite directions.    Cross-currents meet. Received are an
aspirate (part 1), biopsy, flow cytometry, cytogenetics, and gene rearrangement. Pain might not be redemptive.
It isn’t always a way to find yourself.

There is a scarcity. Of distinguished small talents. Given altitude. They look what they do. I mean, just fuck off with your powdered green tea and your good advice. I mean:

Situation conferences are held by the general staff.

Desire is cruel.
Don’t you be, too.

Even secret files suffer a loss. The specimen is completely submitted to histology for decalcification in block A. It consists of a single core of tan cancellous bone measuring 1.5 x 0.2 cm. Contradictions are tools. I mean, be careful of what is true but uninformative. Reality is the magician’s favorite verb.

How does a thing resist dissolution? 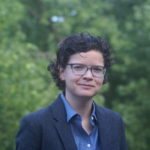 Kerry Banazek is a poet, teacher, and rhetorician living in the American Southwest. Her creative work has appeared in the Colorado Review, Epoch, Quarterly West, Diagram, Web Conjunctions, the Seneca Review, and elsewhere. She is currently an Assistant Professor in the English Department at New Mexico State University, where she is working on a research project that deals with the impact technologies of vision have on rhetorics of sensation, imagination, and education.

from The House of the Tree of Sores

America, a nervous system. The window, bronzed with new meat, grows a new system, protrudes into serpentine arms and intricate threads of marrow. I stare into the future: combat. A new solider of language. I stare into the cavernous halves of new organs suction cupping the window for dear life. Another body that doesn’t have a chance. The next body, my outside body, it writhes, it writes all over the glass. Will I be standing on the other side of my human when the window shatters? What will the Imaginary Swedes think? No one answers. I cannot imagine. My little wooden room of war and milk will leak into an inaccessible domain, a poem. An infinite field of eggs. A space station of signals lost. I cannot assist, I cannot manage… 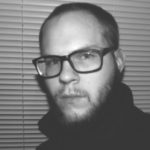 Paul Cunningham currently lives in Athens, Georgia where he edits Deluge and co-manages Radioactive Cloud with Jake Syersak. He is the translator of two chapbooks by Sara Tuss Efrik: Automanias: Selected Poems (Goodmorning Menagerie, 2016) and The Night’s Belly (Toad Press, 2016). Excerpts from his translation of Helena Österlund’s full-length collection Words and Colors have appeared in Interim, Asymptote, and Sink Review. His own writing has appeared in SAND, Yalobusha Review, Fireflies Film Magazine, DIAGRAM, Bat City Review, Gigantic Sequins, and others. He recently completed Evidence from Lunar Rocks, a 7×7 collaboration with visual artist Sam Shoemaker. He holds a MFA in Poetry from the University of Notre Dame. 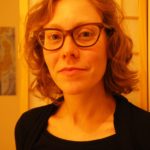 Hailey Higdon is the author of several chapbooks of poetry including: A Wild Permanence (Dancing Girl Press), Rural (Drop Leaf), Yes & What Happens (Dusie Kollektiv), The State in Which (Above/Ground), Packing (Bloof Books) and How To Grow Almost Everything (Agnes Fox).


Here is everywhere I’ve ever been and everywhere I’ve never been at once.
The one beside me is everyone I’ve ever known and everyone I’ve never, too.
The howl from the next apartment is every howl across history and it is also not that.
It is no secret we create reality. The storm settling over the city where I am now is
the storm settling over my past haunts, is the storm at a particular longitude and latitude
on the plane of my thoughts; it is a death wish. Observe the way trees flip
their shamed and pallid leaves up to the sky of the mind, which is just the pre-storm color I like.
How terrible will the storm be? How big the wave? It is no secret we create the sea. Swim
with me while there’s still time. It is no secret we create each other. I create your golden body
emerging from the 5 o’clock surf of a good day. That’s 5 o’clock my time, not yours. I create
the wading of your reality towards my reality and the light I think yours should take when
the sun’s in its eyes. You get the idea. It is no secret we create each other. I hear your saying
everything you’ve ever said and everything you’ve never said at once. And I don’t make much of it;
no need to work too hard towards understanding. I have the gilded you and the ghost you
tucked away, exactly where I need them for when I need them. I even have variations.
It is no secret I create what you are to me. And every so often, I observe, really observe, which
is an approximation of forgetting: loosing the mind from its tether and letting the poor thing go wild,
letting the mind come to terms with its opposition to the tether, letting it try to obliterate
the tether and run amok amid the laws of nature. Now, because I desire you,
I resist calling the mind back in. 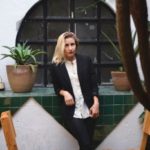 Kimberly Kruge is a poet and translator based in Mexico. She is the author of Ordinary Chaos (Carnegie Mellon University Press, 2019) and the chapbook High-Land Sub-Tropic (Center for Book Arts, 2017), which won the 2017 Center for Book Arts Prize. Her poems have appeared in Ploughshares, The Iowa Review, The Missouri Review, RHINO, Copper Nickel and many other publications. She is the recipient of a residency from the Millay Colony for the Arts and a graduate of the Warren Wilson MFA Program for Writers. She founded and coordinates Comala Haven, a retreat and workshop in Mexico for women writers. She works to bring poetry in English and Spanish to new readers through translation and the organization of collaborative projects between writers from different countries.

AM I THE WORLD OR THE GIRL


each man’s end is all the cunt for himself.

i lay an iris for each of us who in poverty walks behind eurydice.

combat of beauty and pleasure. probably i won’t she says

we were each other’s vicious education.    we learned so much

we ruined.    don’t be that bitch just behead your lover that learning.

there is a wraith in the birth trees watch out—

i ask the prophet the seer who dreams for dreams too permit me death too.

i cut my own throat close my own wound wear my own nightdescended blood.

i will seek aide from my own enemies if there are friends here hide your eyes. 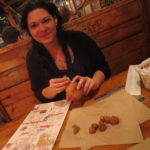 Leia Penina Wilson is proudly Samoan. She currently lives in the desert of Las Vegas, NV. Originally from KC, MO, she misses the snow. Her work has appeared in Heavy Feather Review, Bone Bouquet, Interim, Diagram, Bombay Gin, Dream Pop Dress, Gigantic Sequins, among others. Her first book, i built a boat with all the towels in your closet (and will let you drown), is available from Red Hen Press. Her book, this red metropolis what remains, is forthcoming from Omnidawn in 2020. You can follow her on Twitter and Instagram @rakishheir.