This month we feature new work from the five finalists of Omnidawn’s 2016/17 Open Poetry Book Contest:


Music arises out of darkness
as does breath
in fact, is it.
black & w/hole if we
but listen.
wind plays us in multiple ways gusting through the juice of our body

The rise and ebb of tone [earth at 136.1 Hz]
vibratory, our DNA curative
suspended animation of beings pulsing light to our cosmic home
Ariadne’s golden belt a fabric of star
light.
Kokopelli’s bent horn, an antler, a straw of cosmic
import.
But it’s Nut in her lab coat draped above as
shimmering cocoon, as filament
as khol lined night.
It is Ptah we loose
track of
Anansi’s web neural vines.
Maá Afra
darkness punching through 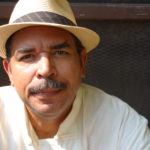 T.J. Anderson III has an MFA from the University of Michigan and a Ph.D. from SUNY Binghamton. A former Fulbright Scholar at Cairo University, he is the author of Notes to Make the Sound Come Right: Four Innovators of Jazz Poetry (University of Arkansas Press), River to Cross (Backwaters Press), Cairo Workbook (Willow Books), the Spoken-Word CD, Blood Octave (Flat Five Recordings), and the chapbook At Last Round Up (lift books). He teaches courses in jazz literature, African American literature, poetry and performance, and creative writing at Hollins University and is the current Susan Gager Jackson Professor of Creative Writing. 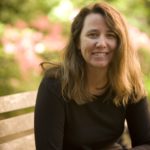 Carol Ann Davis is the author of the poetry collections Psalm (2007) and Atlas Hour (2011), and of a forthcoming essay collection, all from Tupelo Press. Recent work is forthcoming or just out in APR, Agni, The Southern Review, and The Georgia Review. An NEA Fellow in Poetry and a 2015 National Magazine Award finalist in the Essays and Criticisms category, she lives in Newtown, CT, with her husband and two sons, and teaches at Fairfield University, where she edits the literary journal Dogwood and directs the undergraduate creative writing program.

waking up and making, imagining a world in which,
in which is not: catastrophe. Forgive me.

Washing up upon the borders of my solitude, you appeared upon a screen.
You changed me. Utterly. And now, in the aftermath

of that, the self that I became disseminates
an urgency, a nation named by what

it touches, wars against and renders.
This is not an easy task,

but it is, perhaps,
the only one: “Listen; Translate; Speak.” We must remember

one another. We must
remember. The sound we are surrounds us,

a sea of voices ebbing inward, washing out, a noise that enters and replaces and
affects. Intention; Being; Breath. The desert of identity expands: 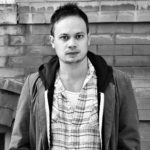 Nicholas Gulig is a Thai-American poet from Wisconsin.


The body
Being carried into
The room inside
The white paper box,
The same model used for cheap
Takeout with friends, roommates,
Cheap, folded haphazardly,
And sunlight falling in
For the first time
Photons shed
In radiative exhaust
Billowing into
The small, lightweight
Too-heavy-to-be-a-bird’s
Body, bare patches on its back,
Torn-off arcs, flayed,
This one has a chip of wood
Bedding thicked in its half-
Shut mouth, cigar-like
That one has a one-eyed squint,
And meanwhile my scissors, scalpels,
And my eyes look in at the
Curl of organs, the
Light reflecting,
Caressing
The revealed inside
Of one whose mouth still
Lips at a wood cigar,
Whose eye squints,
Whose opened carnation-pink
Ribs arch over a mute,
Heavy-lipped liver,
And dark spit of spleen,
Omentum and muscle had
Pursed and kept them underneath,
Hulled dark then but wet
With light now, wet
With the sight that
Slips, sibilant, in 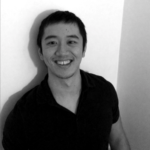 Angelo Mao is a postdoctoral research fellow at Harvard University. His research interests include regenerative medicine and biomedical engineering. He also reviews opera for Boston Classical Review and Opera News. His poems have appeared in Lana Turner, Denver Quarterly, Colorado Review, New American Writing, and elsewhere. He is working on his first book of poems.

[not as fun as one might think the absurdists discussing eggs]

not as fun as one might think the absurdists discussing eggs

nothing to be had

the ‘e’ sound poets will have their day

the beams of fulgosus who has a monopoly on bent beams

the architect of economy housing her noble ideas

the accidental children their small chance of wealth

too hot the steel pages to turn

no such thing as a perfect poland

the hearing of seneca they say like common hearing but better

the farmer his foolish love of the radish 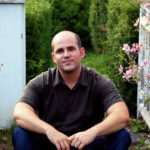 M. A. Vizsolyi is the author two books, Anthem for the Wounded, and The Lamp with Wings: Love Sonnets, (HarperPerennial) winner of the National Poetry Series, selected by Ilya Kaminsky. He is also the author of the chapbooks, Notes on Melancholia (Monk Books) and The Case of Jane: A Verse Play (500places press). Follow him at his website, mavizsolyi.com