The scene of mint, it’s coming into clarity. You or I get
High deep in a dream, and it feels not like waking but
The kit and caboodle of being awake. Behind me a maiden
Pours and the product isn’t the thinnest it could be; it does this
Perfectly. Well, what about the ease? My longtime
Mariner was one of these—who listened.
The cost couldn’t by any means be settled. Greater still.
It mattered he remain thru stubble his gentlest

Self and not regress too egregiously in some form. Both bookish and obstreperous.
After all the branch on the poplar can be society and in it simultaneously.
Like anything. Demonstrate? Awful amount of flailing about. What
I mean by this is that it isn’t wholly out of left field.
My sole baby—you really did it; you went and
Went out in the sweltering—worrying and foreign. I’m sorry, but how

1) Long is it going to take and 2) Can one keep from such and such?

Next door is being haunted by cat eyes.

I’m famous for not giving examples.
But I had wanted to take up a routine

Exercise that would involve moving limbs
Entire, instead of in increments or as perceived

Only thru a timelapse. In the few movements
Of sleeves and shoelaces, spreadsheets, so on.

The vitals are holed up in a torso
Of aftereffects—and there they are! There

Are stories of success for us to still
Diligently tabulate. We exit,

As we have, a plague that you’ll agree
Speaks like all it answers:

Stale oil from steady snowfall.
Why there is fear in the land.

Simple. My mom and dad
Repaint her living room,

Like magic, spiders become invisible—
As invisible as overnight

Does for most, for most of its span.
Unless in a flight. We leave

An airspace for another one and promptly
Get shelled. Or is it husked? Belongings and backups

Take a tumble. Between plain seeking and doing,
You are allowed one assembling, no do-over.

A kilo is one thousand grams across
Two lax syllables. You happen on one

Of many slumps, where I’m on a futon
Not mine, but one at least inside a room.

You misinterpret my grimaces.

The Story of an Error

Whisking is a clash more typical to morning, the
Assemblage of goop that would echo if it didn’t choose to
Instead slump. The part in which you read about yourself
And the bit most get wrong
Share more than a border.
Think of capacity, the barge-in thru marked feedback
Loops that would pulverize any worthy skepticism,

And make it ground—to a fineness most often
Reserved for pin cushions. This is martyring.
But froth is no answer. Lay a bedspread, leave a wife,
Showcase do-able non-existence w/o falling
Prey, soiling the blankets. So we argue, and over
Our words—that is, not as if cups of coffee.

Maybe your agencies could afford you
More than a home, a gully
In the basin, suppose, maybe;
Though I haven’t been one
For meshing with these topographical
Distinctions recently, I think it overall
Might make some sense, recently.

What gets painted over deserves it clearly.
The greenery that met with us was as illusory
As I never was, in my sitting, my sitting for weeks,
Waiting to land something or on it.
In a new environment, in your presence,
I flipped a switch to find there were no lights.
This strain of anticipation could operate, be behind,

What guides our rains, what fails to place them
On the conveyor belt, rain on rails, like regular
Programming. For today they stay scant.
Niceties put away. Nerves in disuse by pressing matters
Together like live wires. So I was taught, tho
Nothing I can lay claim to knowing now.

Until I hit a bridge, a good one.
Art of the mind, to pore over; and
Out and forth—flowing and flown.
The proof sticks to itself, at
A windowpane’s depth of percept—that is,
It’s there, but only to be seen
Thru. Now how continue . . . ?

Earlier life as a flytrap
Snapped harder than forward. I stood with
The braying winds out of curiosity, biting
Into the mealy mantle before
The watermelon rind is hit.
Vitality is its own stinging produce. Fruition, like
Gloom, gets to one. It all sounds very active,
Meaning I sometimes limp along

And others I lap. Love is this recurring
Long view toward the bottom. I kid. Strike out
That invention. Really, any of a sort as would threaten to
Reappear and seize away a painstaking, already slack
Attention—a glare that can skate on whatever surfaces it finds,
Detestably, w/o even a pretense of friction.

“My life / by water—” – Lorine Niedecker

My life by. . . Where?
No sooner offered than terrain
Is given up, is hope then distanced from.

I’d like to know what people know.
A whirlwind of knick-knacks in a home with
One of those light bulbs that takes a minute.

Yes, it seems it does represent me.
You can let the steam abate
A bit before you lift the kettle.

But gently. I admit I had a real fear of losing
With what I had been born.
It turned out to be more

A fear that having that fear proved it
To everyone generously. Now we realize.
The day does not sprout

Any ordinary emblem solely out
Of ritual pursuit. That source of beauty
We might all have an ear

For goes full-throated-ly by before
It cradles its art, like civilizations—the earliest—
Are assumed to have needed to be cradled.

I imagine this is how the mist at a summit
Must conduct itself. Salt and effort.
The gradients rubbed.

For pain and some of your time, you too
Could have your very own—
Nearly the identical. 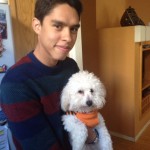 David Alejandro Hernandez is a recent graduate from the University of California, Berkeley. His poetry has appeared in the Berkeley Poetry Review and in a song cycle titled The way they understood themselves, which premiered at Northwestern University in May 2015. David has most recently been awarded the 2015-2016 Joan Lee Yang Memorial Prize, the Academy of American Poets Prize, and the Roselyn Schneider Eisner Prize. Come Fall, David hopes to begin the MFA program in poetry at Washington University in St. Louis. For now he lives and works in the best place he could ever imagine: Berkeley.