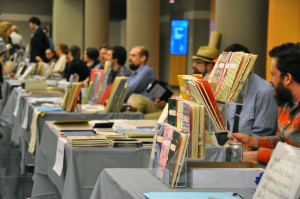 Chapbooks value the personal over the commercial and the hand-made over the mass-produced. They are the material outcroppings of immaterial friendships, exchanges, and performances, the byproducts of a widely-dispersed but tightly-knit community of writers and artists for whom collaboration and book production are a natural extension of the writerly gesture. Chapbooks are as varied as their makers, but their construction is guided by the compatible mandates “make special” and “make accessible.” Hybrids of visual and textual art and highly democratic in nature, they capture and transmit private utterances into public forums and then reverse direction, turning public knowledge into a private encounter.

Each year, as part of our job working with the Center for the Humanities at the Graduate Center, CUNY, Samspon Starkweather, Ana Božičević, and I organize the Chapbook Festival. The CUNY Chapfest celebrates the chapbook as a work of art and as a medium for alternative and emerging writers and publishers. Now in its fifth year, the festival features a two-day book-fair with chapbook publishers from around the country, workshops, panels, a marathon reading, and a presentation of prize-winning Chapbook Fellows by the Poetry Society of America. In addition, this year marked the start of a new endeavor: a collective publication produced by the Center for the Humanities, Megan Magnum, the designer of Lost & Found: The CUNY Poetics Archive Initiative, and a guest publisher—this year, Jeff Peterson, of DoubleCross Press. Inspired by Jack Spicer’s “Open Space,” the publishing initiative offered one blank page to each press participating in the fair.

The co-sponsors of the Chapfest include the Center for the Humanities, The Graduate Center, CUNY, Academy of American Poets, The Center for Book Arts, CUNY MFA Affiliation Group, Poets House, Poetry Society of America, and Poets & Writers. 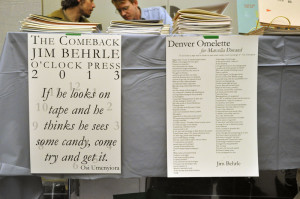 There are too many books of note to name here, but I’d like to highlight just a couple, including Plant Poems by Mei-Mei Berssenbrugge, put out by The Song Cave. While immersed in Berssenbrugge’s text, time slows down, time becomes emotions and emotions are transfigured, congealed, abstracted. “I tell you, your own thoughts and words can appear to inhabitants of other systems like stars and planets to us.” We, “the reader,” become a singular and sky-bound particle, a piece of an unknown planet, an article of longing, looking down from a far-off orbit at the fragile, thoughtful ecology of the book, the earth. The poems decentralize or deprioritize the experience of experiencing, of being at the center of experience, and give priority to the experience of being experienced. (In this case, by an intimate, incomprehensible “other,” a rose.) This reordering of focus constitutes an extreme and personal form of environmental activism. Last year, I heard Berssenbrugge read some of these poems at the Graduate Center with philosopher Kyoo Lee, and I left feeling as though the world had been meaningfully populated with friends I had failed to recognize: flowers. This gorgeous publication comes jacketed in a variation on The Song Cave visual theme by Richard Tuttle. Also from The Song Cave, I bought My Enemies, by Jane Gregory. It’s good. Go get it!

Simone White’s sleek new chapbook Unrest, published by Ugly Duckling Presse, has me reading on repeat. It’s so great and so strange, a little put-off or alienated, but powerful, deep, and deeply puzzling. I can’t identify its tone or tense, it jogs back and forth, balks, then, in protest of an open door, digs a hole in the wall using only the tip of a nail as a tool. Precise, formal, forceful, every-day, totally intelligent and mysterious lines like “Do objects have business/ends? In our parade clothes, shall we go to business, only?/Or, doesn’t the whole thing transact?” and “plastic garbage teenage girls/whip in the street/unknown phases of matter/measure formal limits” are splayed throughout the work. Get this one too!

One last mention: the awesome, terrible, and powerful, Troubleshooting Silence in Arizona by Bojan Louis. “A mediation of book banning in occupied territory,” letter-pressed by Sarah McCarry at Guillotine. Guillotine is a stark, dark, smart, and awesome series of erratically published chapbooks focusing on revolutionary non-fiction. I hadn’t known about Guillotine before the Chapbook Festival. I’m so glad it exists. 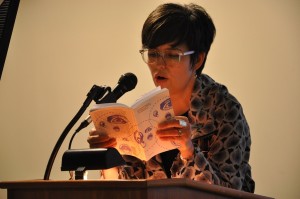 Some highlights include: Mónica de la Torre employing Corrected Slogans, a new print publication by Triple Canopy, as a tool to reanimate a transcript of “Automatic Reading,” a seminar dating from October, that addressed the ways in which “conceptual practices make use of conventions of reading,” with Erica Baum, Corina Copp, Ariana Reines, de la Torre, and others. The exchange between de la Torre as the original conversant and de la Torre as the unoriginal re-enactor highlighted the generative potential of documentation, and the ways in which a duplication or copy might create a second opportunity for novel experience, and the power of repeat.

Andrew Durbin, author of Reveler from Argos Books, and co-publisher of Wonder (with Ben Fama), read from the press’s manifesto: “Wonder continues to LOL, more rapidly and with fewer objects to laugh at, disembodied and hovering over those for whom this laughter signifies something else entirely: the return of poetry.”

Readers Marisa Crawford, with a recent publication from Immaculate Disciples, Kit Schluter of O’Clock Press, Brett Price of Ugly Duckling, Bianca Stone of Monk, Elaine Kahn, with a stunner just out from Poor Claudia, and Patricia Spears Jones were we all worthy of note, while once and future fellows from Cave Canem, including Natalie Diaz, Raven Jackson, Nicole Terez Dutton, Brian Francis, Darrel Alejandro Holnes, gave vivid life to their respective texts. 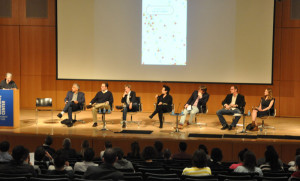 That night, the Poetry Society of America honored their 2012 Chapbook fellows with a 10th Anniversary reading in the Proshansky Auditorium at the CUNY Graduate Center. This year’s fellows—Danielle Blau, Eric Bliman, Justin Boening, and Cherry Pickman—were selected by poets Vijay Seshardri, Dara Wier, and Matthew Rohrer, as well as Alice Quinn, who presented images of all 40 PSA chapbooks in the series, with their covers patterned after historical textile designs. The reading was sweet, sober, and romantic. Cherry Pickman won the crowd over with lines from her book Theory of Tides like: “I hope in time the spectrum/isn’t as important as the one insistent and hard-ringing color.”

There were chapbooks and hands-on book-making demos by the coordinated by the co-sponsors all day long, and lastly, Thurston Moore (!) installed an awesome exhibition of his huge, rare chapbook collection in the front window on the Graduate Center for all to see.

To close: if your bedroom is a museum of hand-printed ephemera held together with thread; if your aesthetic is at once terribly serious and totally amateur, giddy and rigorous, free-wheeling and formal, skilled and unskilled, conceptual, experimental, sturdy, sea-worthy, taking-on-water and devil-may-care, well, then chapbooks are for you. If you eschew profit and conflate “covering costs” with “raking-it-in,” and enjoy voluntary labor during your leisure time; if you plan to spend your last day and hour on this earth sewing your best friend’s poems into limited edition fascicles, then you should join us next year at the 6th Annual Chapbook Festival. Please contact us for more information.