At the tip of the start of another
creature’s life, I don’t barely
belong to the ground I love:
The forest of youth rhymes
eucalyptus and vibraphonist,
is empty of all letters but
resplendent, either because
another creature’s coming
to us or because the distant
part of this body’s past,
the loose confederation of
symbolism, floppy hats,
strings of beads hanging from
the low branches of cypress trees
at the Polo Fields are instances
of muscle memory, brought into
the present by bobbing my head
righteously to unheard music,
bringing that stately peace
I seem to remember arising
in knock-off Tiffany lamps,
in pix of Bob Kaufman,
weirdly-lit donut shops’ plastic chairs,
rampant enumeration, any kind of shirt
with one-button buttoned, a big beige
toenail poking out of a buffalo sandal,
bring it all up into the clotted belonging
of this day; but foremost among these
attachments which come out of the afternoon
fogs, the stateliness and antique
weirdo-hood of that ground is Legs,
by Barbara Shawcroft,
a weirdly inert yet intricate pile
of DuPont-made textile three stories tall,
affixed by a large metal brace to a wall
at the east end of the Embarcadero BART Station,
apparently a giant pair of legs.
It looks like it’s never been cleaned,
a creature made of discarded
rigging tossed over generations
of ships in Yerba Buena Cove.
I stared, pleased that someone’d
put such a bulbous, dusty
mass in this wrong place
full of barely discernable intent
rising from the bowels of the station
a little Geryon, a plug in the drain.
The station kept its hulking, brutalist calm.
Untrained but impressed enough
to lose my sense to this herm,
I turned from the path and knotted up
the way, made up some stark bullshit
to guide this body through its intermingled
trials and comedic frisson,
the way one goes along, as if there was
any such thing as a thing that went.
Just hanging there, ill-lit and neglected,
Legs suggested other body parts,
that if one had the stomach and luck,
each of which sound like ideas but
may just as well be glands, phalanges
or walk-through hearts,
at least in a world like that City
where fortitude and luck were at least
as present as fog and self-reinvention,
that sense of a world on the edge of a world,
well if one had the stomach and luck
one could translate the vastness
of its secrets and folds, its knots,
its sheer incongruity
its leaking whispers or dusty cascades
of synthetic, tightly-wound fiber,
its fundamental muteness
describing a certain fondness or deference
to out-and-out material,
rather like Yngwie J. Malmsteen,
rather like K.K. Downing,
and Buck Dharma
and Sylvia Juncosa lived by
the stately, ungrounded
buzz of the thing on the thing
you plunk your thumb against, and there…
growing old in its station, growing thicker
more unfamiliar as the years’ soot came
to encrust it, a sea giant, a great organism,
mutely, as it comes, bringing all of the station
into its otherworldly calm.
There’s an article on the KQED website
that covers the proposed removal of Legs
from the station. One commenter says:
I always found that thing to be kinda gross and creepy.
Why on earth would anyone put something that would
attract so much filth into that environment?
Its filth is grandiloquent
a thicket on the edge
of the forest of youth,
a stately clump, a knotted
lovespace hanging from a wall
you could crawl in or cling to:
Legs gets its power
from its age not its novelty
its connection to an old idea
to a City that decided Legs
was a good idea, a City that
grew away in the world of my love,
gray in the noon non-sun,
away from coy fabulism, the ear hair
of agèd shopkeepers. I hate it
but often have attacks of
possessive enthusiasm,
love its imaginary softness,
mystic but calm, replete with
San Francsico’s Burning
San Francisco’s Gone
Jan Yanehiro’s pageboy and turtlenecks,
that Polk Street occult bookstore,
the word bathhouse as it was used on TV,
the basement of Grant St. Records
full of Factory Benelux LPs
weird amatuerish euro-pop
obscure stuff, atonal disco —
the other days after the
other days in the City,
formerly called a heaven
with fears to hope in.
Let’s say you lose
heart in it many times
but always come back around
to the archaic throatedness it engenders,
this off-color faith
these old-fashioned instruments
tuned for an early music:
in manuscript, a tune you barely voice
but in performance something entirely
out of the ability of your head to contain.
I get a little bit loose and hotly fear this place
its wine, love and observation,
how it made me a child
a native of homelands
of Greece, of Chang-An,
of Tenochtitlan;
and Legs. 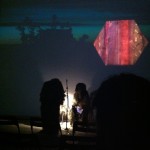 Jared Stanley is the author of The Weeds and Book Made of Forest, as well various book projects, including the forthcoming Oaths of the Blossoms and I Can Hear the Universe Singing. He was born in Arizona, raised in Northern California, and now lives in Northern Nevada.