Her parents died before she could wish them dead…

Water—her name, she changed as soon as she had the ability to. Why do paternal judgments result in such violent idiocies? Charlotte, her new name, never sufficiently answered the question but she had a working thesis that covered substantial and extensive ground.

Charlotte knew what a dead horse smelled like; she knew what volatile organic compounds did to that smell; how it amended the scent of mortality. The exquisite visual presence of an expired and painted equine is something she held forcefully onto; a sight she could not nor did she want to soon forget.

Her parents lived in a sinking, stinking houseboat…

Cameras were installed so that every part of the boat could be observed indirectly. Speakers were installed for the same, externalized, effect. The eye and the voice lodged itself into the body. Like a sea creature ripped out its domestic safety, one was turned into a writhing pool of slime upon entrance. They, the parents, believed in an enforced fog of authoritarian presences but they thought of this weather as transcendental and current. The day Water—or, better, Charlotte—pulled one of her eyeballs out of its socket as an act of formal protest: the paternal order could not have been prouder. They stood in front of the mirror with the plucked eye for hours on end.

She wished for an objectivized desire and the result was only (grandly?) familial loss…

The man behind the bars, in his square cell, reads The Demons. Why he’s chosen this minor book from among that reserve of opuses is anyone’s guess.

At one time Fyodor’s most political work was translated majestically as The Possessed. The title, inadvertently forgiving, gave the proper biblical proportion but lacked the audacity of a properly scandalous translation.

The book was Borges’ chosen one; Camus adapted it to drama; Freud took it seriously. But with The Brothers, Crime, and Idiot why would someone, especially given the man’s predicament, read The Demons? Maybe the library lacked the Russian’s oeuvre and the choice was simply the result of that lack. Maybe he’d read the others many times and he simply wanted to familiarize himself with that socially singular effort. No, these theories don’t nearly reach the answer.

The man said, I need a new mattress, and stood up. He walked over to the shut cell door and gently pushed it open. Are you done playing around, she asked? Playing around, he asked? Sorry, she said and then asked, are you done doing your serious work?

They purchased the old minimum security a year ago. They’d fallen in love with the decrepit place on first sight. But, more significantly, they wanted to help the little town that was selling off the prison as a home. Times were tough for their hamlet and if living in absurdity would help then so be it, at least they would exist near the town they loved.

I thought today was the day, she said. He nodded and said, it is.

The dynamite smelled nothing like what he though it should, slightly perfumed with an indication of charcoal smoke. She was tying bundles to posts and furniture, while he covered the stairs and upper cells.

Hey, he said, do me a favor. What, she asked? Grab my book from the office cell, he said. Why, she asked? Because I want it, he said. Okay, she said.

They stood atop the old prison hand-in-hand. A few months back they’d decked the roof but not for so obvious of reasons. Are we ready, she asked? I guess we are, he said. Hand-in-hand they crouched down and lit two red fuses on either side. The lighting sound reminded him of childhood firecrackers, her for some reason of running in gravel.

The explosions were heard for miles and high above the fire and rubble two bloodied smoke clouds hovered with a levitating book between them. Still, the question of why this book, remained.

The books. The hellish books. And the hell that’ll presently ensue in this lecture hall.

Why stay for a moment more? Why be here at all? Well, that’s too easy to answer. The decisions were farcically made long ago by the selfsame fool who started it. Money’s been paid. Papers have been signed. Grins have been given over and indignantly swallowed sometime later on.

When invisibility is actively desired, it’s an entirely different ballgame. But the one reason, the only reason, to stick it out, just walked in.

—Going over the over and again, again?

—I can’t seem keep my hands off it.

—Your hands are not the problem.

—You know what is?

—My guess is as good as any.

—Will you marry me?

And, at that very moment, one realizes they’re alone and how alone they are, in a musty scented lecture hall, considering the how and when of escaping, fleeing, getting away from all godforsaken academic details. If there’s a reason and I’m sure there is, it isn’t here—just in case I haven’t beat that dead desire into actuality, for you.

Y-O-U, I still don’t understand the assemblage, as I talk and write to myself. The question of how one convinces oneself to escape presupposes that absconding wasn’t an original act, that it wasn’t inbuilt and determined from the get-go. We know better than that. I’ll have your head on a platter—this is me talking to me, again—if you don’t leave immediately. I’m already gone and you hadn’t even noticed, until just right now…

From one building to another, the body drifts ghostlike, deliberate as possible, when intentionality can inactively do no more, and our form cascades to bended knees. Exhaustion brought this on, not supplication, piety, metaphysics and if you’re willing to buy into those secular assumptions: no holy ceremony lies within. Dead dog tired, on the other hand, is readily understood and accepted as given.

Back up on all two, the ghost resumes the latitudinal movement.

Once inside, focal coordinates must adjust to the muddled earth tones. The School of Athens it is not. A school is barely what it is. An institution of demonstrative cognitions, at least that is what our ghost says to itself. And what is that awful smell?

The other ghostlike and not so ghostlike forms fill the space, some entering the hall wherein our specter sits. Funnily enough, the other ones witness ours as theirs—simply, another one. This is somehow significantly more humiliating.
The one next to ours says, “I really don’t want to be here today,” and yawns. “Do you really have to say the same thing every time we’re in this room,” another asks. From the chasm of violent opposites, our ghost aggressively smirks. A decision begins coalescing, snails pace but solid.

The ghost raises the seat of its pants from the seat itself and is on the move, from one room to another, but this room’s vacant in a manner befitting good judgment. Only a solitary light bulb stares at the ambivalent shape. And just as that shape begins to move its mouth, the light bulb upsurges and shockingly interjects.

—I’m not hanging around for the fun of it. And you are emphatically not the first idiot to intrude on my sleep. Shush, don’t interrupt; I’m not Byron the fucking Light Bulb. I’m not a cuddly teddy bear waiting for the nearest flesh sack to hold me in its puny arms. Look at yourself for god sake; you’re barely there. I could kick the shit out of you and not even flicker. Do you think I wait around all day for childish ghouls to vomit out their conflicted erudition? Here’s a little news for you: I don’t and neither does anyone else. We’re sick of your complaining, your vulnerabilities, your thin-skinned and softheaded ways. Jesus H. Christ, grow up! Or, if nothing else, fuck off! Neurosis can be interesting but preening indulgent babies are only ever cumbersome and, frankly, boring. Jesus, you can’t be more bored than having to negotiate with you subhuman types.

From somewhere across the room, another upsurge commenced, but this one was mammoth in size and sound. The bulb, if you can call this gargantuan thing that, was perched, in an awkward way, far above where one would expect it to be. It’s cord looped like an under arc drooping, about to constrict. Then the light dropped and by the weight and pull of its tether, the bulb swung its bulk directly at the angry, now little, bulb. Before one could say, “what’s happening here,” the disgruntled light shattered and spoke no more. A great light hung before the ghost. Never before had it faced such radiant benevolence. 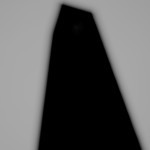 LM RIVERA lives in Santa Fe, NM. He co-edits Called Back Books w/ his partner and poet Sharon Zetter. His work has appeared in Omniverse, comma, poetry, textsound, Upstairs at Duroc, Alien Mouth, F U Z Z, Mannequin Haus, and elsewhere. His chapbook THE LITTLE LEGACIES is available from Glo Worm Press and his first full-length book, The Drunkards, is forthcoming from Omnidawn.