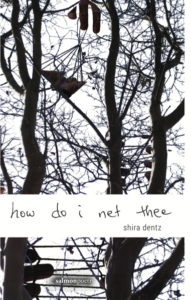 In a 2016 “self-interview,” Thalia Field declares that situations—“paradoxical ecologies of perspectives and meanings”—make for “the best literature.” Field emphasizes the potential inherent to a situation’s “multiple spacio-temporal worlds, where nothing is necessarily more true or more important or more worthy of attention.” This idea seems not unrelated to Lyn Hejinian’s description of the “open text,” in which “all the elements of the work are maximally excited” and resist closure. Both the “situation” and the “open text” are sites of possibility—of the essai—and dynamic experience; direct and/or singular interpretations are abandoned in favor of slippage, association, re-invention without end. “Situations,” Field writes, “go beyond language toward awareness—extra-human, particular—and here is the possibility of getting past ourselves to explore all the sides of the living world.”

Shira Dentz’s latest book of poetry, how do i net thee, strikes me as attentive to exactly this sort of exploration. In this, her third full-length collection, Dentz does not discern between the particular and the panoramic; she is a poet who engages with both interiority and the natural world, not in equal measure, but in equal mixture. There is often no separation between the inside and the outside in these poems—a line from the poem “Ringed like a tree”: “We lived inside a fruit, pit silence” is followed with: “No-mother’s wing blown through like a flute / / The air is happy when it is lifting something.” (23)

In Dentz’s poems, emotional truth is not figuratively compared to the features of landscapes but instead exists crucially among and alongside them—Dentz achieves something notable here in that she resists the seductive but facile binaries of man/nature and civilization/wilderness; the poems, while often fully engaged in the speaker’s subjectivity, do not privilege revelation, reason, or even inquiry over “the tendril of a sweet potato” (23); “trees thick as cream” (45); or “that sun a lemon rinse hon” (17).

Take, for example, the following excerpt from the poem “watercolor tongue”:

yesterday bikes in a forest
with deer. would be perfect, a man. my head could
race, maybe did one too many now it’s coming back how i asked what’s
your schedule. i’ll have to look. why did i bother, brother, watermelon
claw, green shades of sunset flesh.
branches leaves         lace          in the breeze
majestic green pepper green. (19)

In this excerpt, the somewhat abstract recollection “my head could race, maybe did one too many” is connected by the language of memory “it’s coming back” to the more concrete experience, “i asked what’s your schedule. i’ll have to look. why did I bother.” This moment, closing in on the pain of a rejected overture, then opens out again associatively, into colors and sounds, before quite literally (through the space between words) dispersing into the image: “branches leaves      lace       in the breeze” followed by the playful echo of “majestic green pepper green.” In this “situation,” a moment is imbued with sensory experience, memory, and the spatial/temporal surround. It is important to note that one is not exalted over the others. Rather, each becomes heightened through its connection with the other, expanding the concept of the self and, simultaneously, moving past it.

The book is divided into seven small sections, which— given the dynamism and movement of the language, and the lack of easy closure at poems’ ends—read more like pauses or shifts than clear breaks. This isn’t to say that the collection has either a definable arc or stylistic uniformity—it doesn’t. The formal variation is, in fact, a notable feature of this work—prose poems, concrete poems, fragments, and lists all appear, with various orientations on the page. Yet somehow, even across multiple modes, the voice of these poems is always recognizable and intimate. Perhaps it is the influence of the book’s title, the relationship between the “I” and “you” of how do i net thee, and the particular stakes of that question, that suggests—at least the possibility of—a direct address to the reader. This looming question, along with the speaker’s ability to draw out threads of scene and story with each new impression, makes the “i” of the poems something of a confidante, a guide.

Sometimes the “i” disappears—for instance, when a poem moves away from the lyric and becomes, instead, a gathering of materials. Sometimes this is rendered in an overt list, as in the following excerpt, from “Tunnel Tongue”:

More often, objects materialize by way of association, though the reader is not aware of their context. From “The way a drop”:

In these moments, the reader is left among the rubble of fragment, of things, looking for anchorage. Mooring comes when the “i” returns: the excerpt above is soon followed by the question: “is it amnesia i’m tracking? / like a death?” (33) There are many questions like this throughout the book: “Whose are these?”; “Is this what I’m left with?”; “where are we?” The poems can be read as a process of (re)orientation, and the speaker’s ability to lay bare her own dislocation becomes an ongoing communion between the “i” and the reader. The experience of getting lost together, this tether to the speaker, is integral to how do I net thee; without it, the poems might be in danger of losing an intimate connection to the reader, who must re-focus and re-engage with Dentz’s formal play, changes in vernacular, and locative shifts.

Much of the language of these poems is rooted in the familial/domestic— and though often fragmented, manages to be lush with objects and artifacts, flashes of memory. One of the collection’s strongest poems, “Marsupium,” explores the complex psychic space of desire, fertility, and loss. The poem opens, grounded in the body:

A girl of freezing ice in my stomach; papoose;
Skinning my meat (4)

Interiority, and its relationship to the capacity of the body, becomes further complicated in the next series of images:

i’m a basket full of eels on the backseat of a car.
curled like question marks.

The poem unfolds across several pages, and makes a tender study of the state of emptiness and longing through a series of nuanced images.

white keys on the far ends of a piano

a baldness, with nothing around it

Silence
vaseline on my senses

For a few minutes I sit in front of a white sun aglow. watch it move behind a building. (4-5)

How things “become missing” from their natural or expected surroundings is rendered movingly through the images of those anomalous piano keys, the space in the sky where the bird is not present, the slippage of the sun from view—how easily its blinding presence can be obscured, made absent. These absences re-surface throughout the poem, which, it should be noted, is long but quite spare. For instance, one page of the poem contains only one line:

The single line on the page is not unlike the white piano keys’ “baldness, with nothing around it” with the word “negative” evoking multiple interpretations. The space between “egg” and “negative” establishes a connection through absence, and harkens back to the image at the beginning of the poem: “a girl of freezing ice in my stomach.” These small moments, finding their way within the space of silence, from the thick blurriness of “vaseline on [the] senses” are fidelitous to the way a mind might cope with “irretrievable loss” (9)—each line, as Dentz writes at the conclusion of the poem, is “a wall One big brush, period and again There’s nothing grainy or soupy about It’s just like the street, a spot, used to get from one point to another” (11).

how do I net thee is a paradoxical collection, in that narrative is abstract, but the language is incredibly precise. This precision is perhaps the work’s most compelling feature, and emerges in phrases like “a skirt of pine trees draped along mountains” (15); “silent moss and fingers of light” (52); and “skin the cracquelure of a fly’s wing” (57).

Referring to “precision” often suggests an “accuracy of meaning.” In how do I net thee, accuracy transcends the act of pinning down a definition or empirical data, and instead gravitates to the specificity of an impression—evidenced in lines such as “My father’s younger voice wears a cap I call salvation” (11); or “orange rind, smell—/ a corseted idea / like sunrise and sunset” (6); or “plane engines, jazzy light, neighbors knocking walls” (27). Dentz’s precision does not define, it evokes—like a translation that attends to the context of a phrase over its direct correspondence to meaning. This is a central tension in the collection—the poet’s need to render something precisely, while also recognizing that the broader story, its interpretation, narratology itself is always mercurial, shifting, nebulous. In this book, the resolution of an experience is less important than the concreteness of its activity.

These poems teach me about attention, about being attentive— to the “brief flick in the air like light from a lighter” (8). To the progression of mystery and the sometimes inscrutable marks that mystery leaves on the world. For myself, I was netted from the opening poem, “wax” in which Dentz generously offers a way to approach this work, in one succinct line:

The devastating fact of existence defined only by one’s history—that our past defines us—is immediately followed by, upended by, something unprecedented—those taller trees. The playful “psst” is the jolt out of the past’s propensity for closure, for the Truth of a single interpretation. The “I say” is a gesture of faith, of a poetics. In the tender nets of Dentz’s poems, which are, at turns, brutal and delicate microcosms of the lived experience, the world undoes us, daily, then reminds us of our capacity for vision.

The Thalia Field quote, in the first, second, and last sentence of the first paragraph of the review, is from:
http://thenervousbreakdown.com/tnbfiction/2016/11/thalia-field-the-tnb-self-interview/

Lyn Hejinian’s concept of the “open text,” as quoted in the third sentence of the first paragraph, can be found here:
https://www.poetryfoundation.org/articles/69401/the-rejection-of-closure