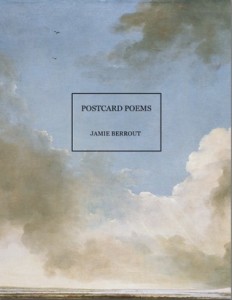 “How is a poem more than a record of the things I wrote before being killed?”

Jamie Berrout shows us how in every interaction – at the courthouse, in the clinic, at home, in the street – the stakes for trans women of color are always high, and one of her work’s most pressing concerns is to explore how pervasive violence directed at you and others like you shapes your sense of self.

Her collection Postcard Poems is three chapbooks of prose poems divided by place, migrating from Portland, to Los Angeles County, to the South Texas borderlands. The language is spare and direct; many of the stories read like parables. They withhold even as they get real, perhaps because the speaker experiences the world from such a great distance that every space is mediated by her remove from it. Still, the drive to connect powers this book. She answers her question about what a poem can be by looking outward. Her work is a poetics of self- preservation through the movement towards relation: “Poetry: now there is no distance between us.”

One of the great powers of these poems is their restorative fantasy. Berrout highlights the surreality of everyday dealings with cis people, from city bureaucracy to retail, then enacts revenge. Here, the clerks and guards who laugh at you so uproariously double over as their lungs collapse with the stolen breath of their casual bigotry. Then, in Los Angeles,

I was too tall for the clothing in the stores. Whenever I stuck my head in a clothing store, the clerks would yell and shake their heads at me. I stopped wearing clothes. Now when I step over the rows of cars on my way to work, people are even more confused than before. The people are afraid of me; they are repulsed by me; but they are unsettled by their attraction toward me: each of them, alone at night in their rooms will meditate on my image and, perhaps, revise their prejudices. I will be destroyed by them for existing or I will destroy their illusions.

 Through her refusal to stop being a visibly outsized, indecent, confrontational being, the speaker imagines one way trans people can stop contorting ourselves into a world not made to fit us. We’ll bust it open or be busted by it, but it can’t go on like this.

These moments of fantasy feel stabilizing, but I appreciate that Berrout doesn’t end at a reassurance that we deserve to exist. The narrative returns again and again to the difficulty of that existence, denying resolution. I don’t know if I’ve ever read another line of poetry that does to me what this one does: “I want my shame to stop what it is doing.” There is something so hopeless and hopeful at once – shame is a feature, to tame like cowlicked hair. Somehow it is hers and yet not something she is doing to herself, both intrinsic to her and not. It feels at once like something possible and impossible to change.

Where the poems do find resolution, it is in the self: It’s hard to find love, family won’t hold you, children are impossible – grow your hair. Community is a wind that blows around the speaker and disappears; the heat and water of the air without it makes being near to everyone feel oppressive. It seems almost unfair, or unkind, to say that the speaker’s isolation limits the poems, but I wanted to ask her, what would happen if you spoke with other people? I have been excited to see that Berrout is beginning to answer this question in the newest writing she shares online.

In writing about Berrout’s work, I have been saying “we,” but even as she and the speaker and I are alike in many ways, there are other meaningful ways in which we are different. One of the productive challenges for me in reading these poems was not to elide those differences into relational closeness, but to let them stand. In the final poem, she instructs, “Disassemble, there’s a white person standing there.” Instead of just nodding to myself, “Oh yes, how many times I have broken myself apart to continue existing in front of cis people, men, straight people, masculine people,” I got to pause and reflect on the times I have forced others, people of color, trans women, to disassemble, even just through my presence. As we imagine a trans literature, we need to center more work like this, which asks us to be our whole, various selves together.


Jamie Berrout is a Mexican trans woman from South Texas. She lives on the north coast of California and blogs at desdeotromar.tumblr.com. Co-editor of a forthcoming anthology of fiction by trans women of color, her first novel is “Otros valles,” and her most recent book is “Incomplete Stories and Essays.” Her books are available to trans women at no cost through her blog.

Charles Theonia is a poet and teacher from Brooklyn, where they are working to externalize their interior femme landscape. They are the author of “Which One Is the Bridge,” and they keep a mostly-poetry blog at qu-arles.tumblr.com. With Julieta Salgado, they edit “Femmescapes,” where four of Berrout’s poems appear in Volume 1.